Last year in Paraguay, a 10 year-old girl became pregnant after getting raped. Her mother demanded an abortion, and when officials refused, Amnesty International was outraged. The group insisted the girl needed one to “save her life”… 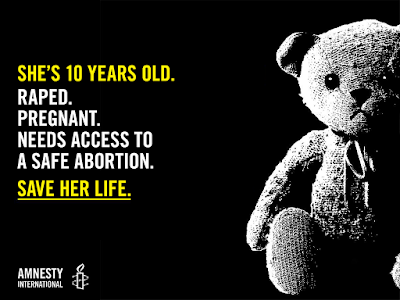 … which would come as news to her: she gave birth via c-section without complications. The girl named her daughter Milagros–Spanish for ‘miracle.’

Similar controversy erupted in Uruguay when an 11 year-old was impregnated by a middle aged man. Although she could have sought an abortion, the girl refused, and former health minister Susana Muñiz said forcing her to abort would “be inhuman.” Not everyone agreed: despite the hospital’s assurance that she wasn’t in danger, some in the “pro-choice” community argued the girl should have been coerced.

While critics seemed to think abortion would remove the potential for physical harm, that wasn’t true. Both pregnancies weren’t detected until well into the second trimester, and as a Paraguayan health official pointed out, a late-term abortion can carry fatal risks.

The idea that abortion would prevent more emotional damage doesn’t hold up either; a study published in the British Medical Journal found that abortion is associated with an  increased risk of suicide.

Amnesty claimed that not aborting baby Milagros was “tantamount to torture,” which is curious. After all, she was discovered at 21 weeks, and Dr. Kanwaljeet Anand’s research at the University of Tennessee indicates a fetus can feel pain a week before that. In the video below, Dr. Anthony Levatino what an abortion would’ve involved.

If anyone is promoting torture here, it’s Amnesty International.

Despite all of this, there’s definitely one group that benefits from abortion when it comes to child rape: the men who commit it.

Timothy Smith understood that, which is why he brought his 13 year-old stepdaughter to Planned Parenthood after getting her pregnant. Staff there had no problem aborting the evidence of his crime and didn’t bother contacting authorities. As one later admitted, “being thirteen and pregnant alone is not a red flag.”

Gary Cross also took his 13 year-old victim Planned Parenthood. Luis Gonzalez-Jose brought an 11 year-old there too. Fellow child rapists John Blanks, Jr., Adam Gault, Joseph Coles, Kevon Walker, Edgar Ramirez, and Grey David Woods got help from Planned Parenthood as well. All of them were able to stay out of jail and keep harming their victims thanks to America’s largest abortion chain.

That certainly fits with what Live Action has uncovered. When Live Action founder Lila Rose told Planned Parenthood staff that she was 14 and pregnant by 31-year-old man, Rose was instructed to lie about the man’s age when seeking an abortion.

Live Action investigators also went to a Planned Parenthood office while posing as child sex traffickers. The director there offered to arrange abortions on child prostitutes who “can’t speak English” and “won’t know what’s going on.”

Child rape is a despicable crime that needs to be fought. One way to do that? Stop subsidizing it. Tell Congress you want Planned Parenthood’s half billion in funding sent to federally qualified health centers (FQHCs) instead. FQHCs supply care to people with limited means, performing over five hundred thousand mammograms annually. And unlike Planned Parenthood, they don’t help predators get away with abuse.

Further, tell your elected representatives that the abortion industry should be investigated and held accountable for aiding rapists. Because when abuse happens, someone needs to pay. It shouldn’t be children like Milagros and her mother.