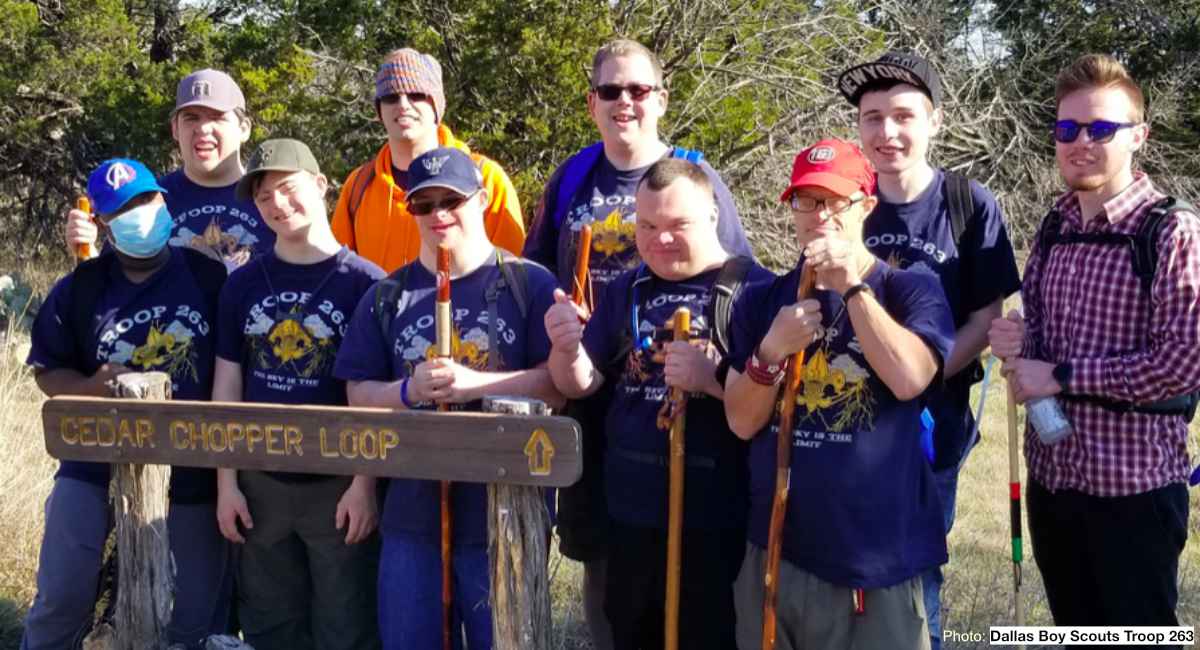 When Tim Burns joined the Boy Scouts, he knew he eventually wanted to earn the organization’s highest accomplishment: Eagle Scout. With the support of his father, Ben, Tim’s hard work paid off as he earned this distinguished badge in February.

Tim, who has Down syndrome, is a member of scout Troop 263 in Dallas, Texas, and Ben is the Troop’s scoutmaster. Troop 263 is a special troop geared towards boys with disabilities, and has been authorized to extend the age limit past the usual age of 18 so that the scouts have as much time as they need to progress and be enriched by the BSA curriculum. In the past, scouts in Troop 263 have ranged from ages 13 to 40.

For Ben and 28-year-old Tim, the extra time made the journey all the more special and enjoyable. ”Scouting should be fun,” Ben said, according to Scouting Magazine. “We learned to camp, cook, hike, swim and do so many activities we never would have done without Scouting. So in a way, having a disability allowed us to really relax and enjoy the journey.”

Tim has some challenges with communication, so some of the required badges were substituted with different, but equally challenging ones. “We always selected badges we felt were just as difficult as the one we were replacing, and every requirement has to be completed,” Ben says. “The important thing is the time. Don’t try and rush things. Take your time and do things one step at a time.”

And indeed, the Boy Scouts have been fantastic for Tim. Ben reports that Tim has learned to be more self-sufficient thanks to his adventures with scouting.

Tim’s achievement comes despite serious setbacks facing Troop 263 in the past year. In early 2020, the troop’s trailer was stolen. “It had all our camping gear in it, as well as tents and cooking equipment and everything, so we just can’t go camping without it,” Ben said according to CBS DFW last fall. A GoFundMe campaign to replace the lost trailer and camping equipment exceeded its target goal of $15,000.

The boys of Troop 263 told an interviewer with CBS Dallas that they love earning badges, everything from camera, to hiking, to game design. And they take part in outdoor activities ranging from kayaking, to fishing, to archery.

For scoutmaster Ben Burns, the lessons that scouts like his son Tim have learned through scouting are invaluable. “We’ve done so much over the last ten years. It just kind of helps them understand, you know, I can do these things,” Ben said, according to an interview with CBS Dallas.