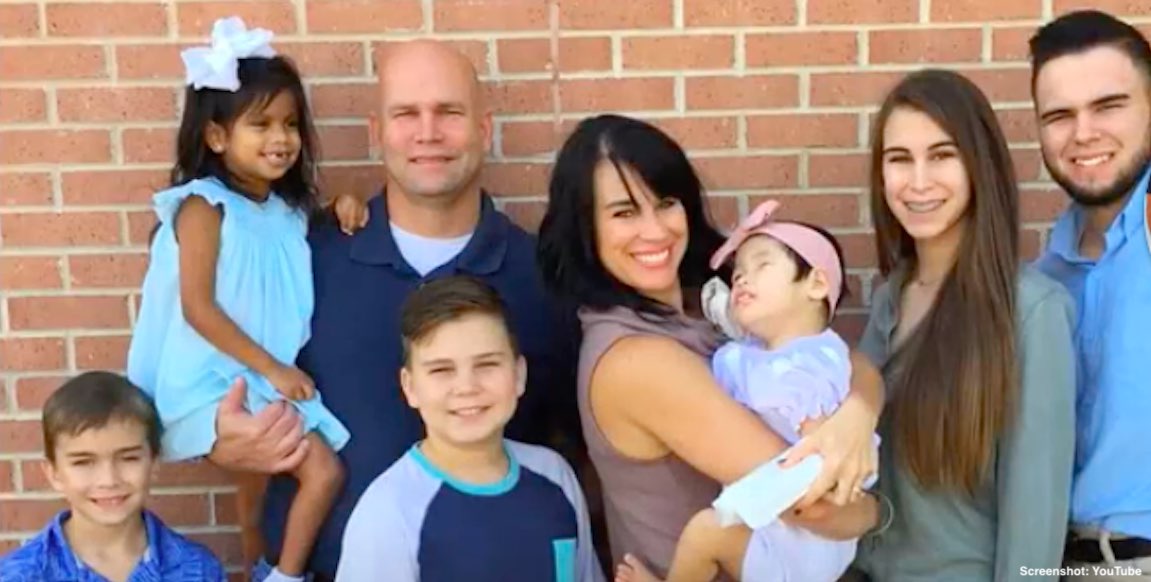 In early 2018, a friend of Louisiana resident Ashley Felts shared a photo on Facebook of a little blind girl living in an orphanage in China. Ashley’s friend prayed that Isabelle, who was five years old at the time but could not walk or crawl and was still bottle-fed, would soon find her forever home. Over the next few days, Ashley could not get Isabelle’s image out of her mind. However, she and police officer husband Stan had just recently adopted a little Filipino girl named Mika Ella, who had significant medical needs of her own.

Ashley eventually told Stan about Isabelle, meeting him for a quick lunch during one of his work shifts. She said in a video celebrating the two-year anniversary of Isabelle’s “Gotcha Day” that she had Isabelle’s photo on her phone “and I just threw it across the table at Stan and I said, ‘I feel like God is telling us, we have to adopt this little girl. And he’s in his uniform and there’s all kinds of people around and I just start boohooing. And my husband looks at me, and looks at this phone.'”

Stan remembered, with great emotion in his voice, “I immediately just threw my hands up on my head and I was like, ‘Oh, Ashley, it’s not time. We’ve decided, you know, we’re going to wait until later this year, we’re going to adopt again. But it’s too soon. We’ve just finalized our adoption a month earlier with Mika Ella, and it’s just too soon.'”

Ashley said she “poured [her] heart out” to her husband, saying, “I just don’t think that there’s one excuse that can come out of my mouth that justifies telling that little girl ‘No,’ that she doesn’t deserve to be in a family just because she comes with all of these scary medical concerns.”

Ultimately, words from their 18-year-old son Addison decided everything. When he heard about Isabelle, he immediately said, “You have to go get her.”

Addison said, “Dad, would she be better off blind in an orphanage or blind at our house?”

Six months later, Stan and Ashley met Isabelle in person, but nothing prepared them for learning the true extent of years of malnutrition, lack of daily love and interaction, and hygiene, that she had suffered. Though five and a half years old, Isabelle weighed just 19 pounds, her teeth and mouth were “covered with yellow calcium buildup,” and “she was just curled up in a little fetal position” all the time. The Felts took her home to big brothers Addison, Grayson, and Jackson, and big sisters Emerson and Mika Ella.

Isabelle’s journey has had its ups and downs, but she now has a family to take care of her. She has had two hip surgeries to correct hip dysplasia, and the neglect she suffered in the orphanage led to severe mood swings along with harmful “stimming” behaviors — self-stimulating behaviors typically involving repetitive movements or sounds as a coping mechanism to reduce anxiety. This year, Ashley noted that Isabelle had made significant progress on the Nemechek protocol, which has been successfully used in children with neurological and neurodevelopmental disorders like autism.

In the video of her two-year adoption celebration, Isabelle can be seen kicking her legs and splashing with her arms in a swimming pool, smiling and giggling. Her mood swings have largely resolved, and her self-stimming behaviors are markedly reduced. “Izzy” is learning to walk and talk, and is now 34 pounds.

In May Isabelle’s family posted that they hope to bring home another little girl from China, a three-year-old who has physical deformities who desperately needs a family. They hope to adopt her by the end of the year, and have established a GoFundMe to assist with adoption expenses.