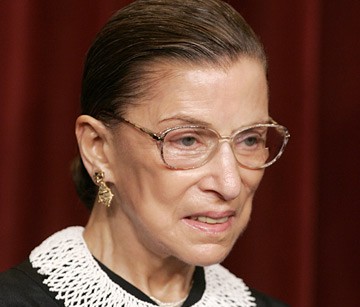 The Supreme Court’s vindication of Hobby Lobby and Conestoga Wood’s basic religious liberties may have thrown pro-abortion zealots into angry, thoughtless, and comically inept despair, but at least they found one bright spot to cling to most bitterly: Justice Ruth Bader Ginsburg’s dissenting opinion.

And not just because she has the decency to not practice law while male. At Mother Jones, Dana Liebelson highlights what are supposedly the most brilliant examples of the Clinton-appointed jurist sticking it to her colleagues. Odds are you’ll see a few of these approvingly quoted in your Facebook and Twitter feeds, so hopefully this will help dispel some constitutional malpractice.

The exemption sought by Hobby Lobby and Conestoga would…deny legions of women who do not hold their employers’ beliefs access to contraceptive coverage.

Only if by “legions” you mean 330 at most, by “access to” you mean “coerced subsidization of,” and by “contraception” you mean only four contraception types out of twenty.

Religious organizations exist to foster the interests of persons subscribing to the same religious faith. Not so of for-profit corporations. Workers who sustain the operations of those corporations commonly are not drawn from one religious community.

I don’t know which is worse – the rank bigotry of claiming that religious organizations are solely interested in the welfare of their own members or the assumption that profit must be a for-profit corporation’s only goal. I do, however, know that everybody should be terrified whenever a high government official presumes to decide what our societal roles should be as if they’re playing SimCity with our lives, then defines our rights based on their personal vision of those roles.

Any decision to use contraceptives made by a woman covered under Hobby Lobby’s or Conestoga’s plan will not be propelled by the Government, it will be the woman’s autonomous choice, informed by the physician she consults.

Did anybody ever claim that the government was coercing people to use contraceptives? How would that have even factored into the plaintiff’s argument? Is Justice Ginsberg straight-up imagining arguments that never happened?

At Salon, Ginsburg fanboy Elias Isquith suggests that her point is “reject[ing] that the birth control mandate should be seen as an act of government coercion,” because it really “provides women with the ability to make their own choice.” But that’s not even trying to make sense.

Whether one person is being coerced has precisely zero bearing on the question of whether someone else is being coerced, and the mandate – making someone do something under penalty of $475 million per year in fines – obviously qualifies as coercion.

It bears note in this regard that the cost of an IUD is nearly equivalent to a month’s full-time pay for workers earning the minimum wage.

Hmm, good point. We forgot to take into account the Constitution’s “Costs of Goods and Services” clause! It’s right about…hold on, I’m sure I put a sticky note on it…just give me a minute…

Snark aside, it also bears noting, as Ramesh Ponnuru does, how Ginsburg would twist the opposite to suit her desired conclusion: “if it were cheap, she’d cite it to show that employers aren’t burdened by it.”

Would the exemption…extend to employers with religiously grounded objections to blood transfusions (Jehovah’s Witnesses); antidepressants (Scientologists); medications derived from pigs, including anesthesia, intravenous fluids, and pills coated with gelatin (certain Muslims, Jews, and Hindus); and vaccinations[?]…Not much help there for the lower courts bound by today’s decision.

Nonsense. In the majority opinion, Justice Samuel Alito explains that other mandates “may be supported by different interests (for example, the need to combat the spread of infections diseases) and may involve different arguments about the least restrictive means of providing them.”

In other words, the Religious Freedom Restoration Act already gives lower courts tools to assess such objections: evaluate whether there’s a compelling state interest in mandating something, evaluate whether government intervention is necessary to satisfying that need, and evaluate which forms of intervention are available to the government and if they chose the least burdensome one.

Whether, for instance, unwanted pregnancy is easier to avoid than infectious diseases, and therefore more or less of a public health concern, is not difficult to determine.

Besides, it’s another catch-22 – Ginsberg raises this terrible outcome as a serious possibility, but other left-wing commentators have taken Alito’s explicit shutdown of the danger as evidence that the majority sees “women’s healthcare” as intrinsically less compelling than services men also need. Broad ramifications are evil, but so is limiting yourself to the situation before the court; no decision other than voting their way would have entitled the justices’ motives the benefit of the doubt.

In any event, if you sincerely believe they would rule, say, Viagra as more deserving of a federal mandate than ella, please seek professional assistance for your Stage-5 ideological blinders.

Approving some religious claims while deeming others unworthy of accommodation could be “perceived as favoring one religion over another,” the very ‘risk the [Constitution’s] Establishment Clause was designed to preclude.

Sorry, I wasn’t aware that how a decision is perceived trumps its actual merits. Please enlighten us as to where this legal principle comes from, because last I checked, the point of having you people serve life terms was to uphold the law impartially despite ignorant perceptions, and that you write detailed explanations of your rulings precisely to combat such ignorance.

The court, I fear, has ventured into a minefield.

No, it’s just navigating its way through a minefield the entire federal government’s been entrenched in for generations. Thank goodness the RFRA was on the books to guide SCOTUS toward liberty this time, but it shouldn’t have ever been necessary in the first place.

We don’t need a morass of tests to balance compelling interests vs. restrictive means vs. substantial burdens when the only questions that mattered were “what clause of the Constitution entitles someone to have someone else provide him or her with a particular good or service?” and “what clause of the Constitution enumerates the federal government’s power to define private employers’ benefit packages?”

Ours is a limited government of enumerated powers, which may restrain private action only to protect the individual’s life, liberty, or property rights. All other private, consensual arrangements – yes, even the compensation offered in exchange for a job – simply aren’t the feds’ business. As my blogging friend Walter Hudson puts it at PJ Media, “[t]hat’s how trade works. I offer. You accept, pass, or counter-offer.”

Ruth Bader Ginsburg is so plainly uninterested in returning to her constitutional duty that she adopts a staggering amount of factual and logical falsehoods. That the contraception-obsessed left is hailing her sophistry as greatness indicates we won’t escape that minefield anytime soon.