Ghazaleh Moayedi is an abortionist practicing in Hawaii. She participates in telemed abortions, and while she’s also an OB/GYN, it seems that her work as an abortionist is what she’s most passionate about — judging by her media presence, anyway, which revolves almost exclusively around abortion. The most recent example? An op-ed Ghazaleh Moayedi wrote for Glamour magazine — which routinely promotes abortion — which was chockful of disturbing quotes.

Moayedi opens her op-ed by explaining that she’s currently pregnant, in her third trimester. A colleague asked her if she would continue providing abortions after having her baby, and she assured them that she wasn’t going to stop. “I just thought it might be hard to do abortions once you have a baby yourself,” Moayedi quoted her colleague as saying. Moayedi explained that she became pregnant with her first child during her second year of OB/GYN residency, and people reacted with cruelty. “I immediately came under scrutiny from my superiors,” she said. “There were ‘jokes’ about forcing other residents to be on birth control to prevent spreading the disease.” Pregnancy was viewed as a disease by OB residents? This hardly seems like a healthy attitude toward human life.

Far from realizing the horrors of abortion after having carried a baby herself, Ghazaleh Moayedi claims it only made her more committed to abortion. “I am often asked whether providing abortion care is hard as a mother — as if abortion somehow exists in a realm outside of motherhood,” she wrote. “But motherhood is not an accidental or natural job; motherhood is a job done with intention. Holding my baby’s tiny hands in my own not only strengthened my commitment to providing compassionate abortion care but also exposed how I needed to commit to supporting mothers in all aspects of my care.”

But what about the “tiny hands” that cannot defend themselves? Why are those real, human lives being ignored?

“Choosing abortion is an act of love.”

While Ghazaleh Moayedi explains how being a mother has improved her job as an OB/GYN, she laments that our culture does not celebrate abortion more, including — bizarrely, and offensively — on Mother’s Day, and then argued that abortion is an act of love.

“There is no Mother’s Day card to celebrate abortion,” she complained. “There are Mother’s Day cards to celebrate giving hugs, wiping noses, and kissing boo-boos—actions that are seen as the core of how a mother expresses love for her children. For my patients who were not parents, and did not want to be at that moment, or who never want to be a parent, I recognize their abortions as an act of intentional motherhood. Choosing when to parent is an act of love. For my patients that were already parenting, I feel the deep love they had both for the children they had and for the pregnancies they were ending. Choosing an abortion is an act of love.” 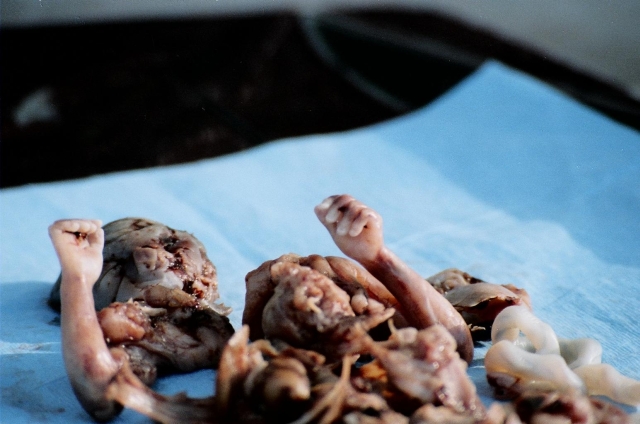 Ghazaleh Moayedi claims this is an ‘act of love,’ but this preborn baby’s mutilated body shows how violent second-trimester abortions are.

She then finished with a disturbing story about a woman who came in for an abortion, with her two born children in tow. “As I finished the five-minute abortion procedure, we laughed about motherhood as her other child watched videos on my phone,” she said. “We laughed about how demanding and obstinate toddlers can be, about the tribulations of potty training, and about how absolutely strange that ‘Daddy Finger’ song is.” There’s no mention of how these children might feel later, when they grow up and realize that they were present as their preborn sibling died, all while the abortionist responsible laughed.

The ghoulish attitude from Ghazaleh Moayedi is appalling — but unfortunately, it is seemingly commonplace in the abortion industry.

Abortionists: the ‘lowest of the low’

Recently, Planned Parenthood abortionist Leah Torres caused widespread scandal when she tweeted that preborn babies can’t scream because she cuts “the cord” first. “You know fetuses can’t scream, right?” she tweeted. “I transect the cord 1st so there’s really no opportunity, if they’re even far enough along to have a larynx.”

Abortionist Willie Parker frequently talks about how his “Christianity” compels him to perform abortions, even though he admits that abortion “takes a life.” He has also compared himself to Jesus and Job, as well as to Martin Luther King, Jr. and Abraham Lincoln.

Diane Derzis, the owner of Mississippi’s last abortion facility, has said that God wants her to perform abortions. “I feel like God wants me to do this job,” she said in an interview. “I thank God every day I had that abortion,” she added later. “It was not a great experience, but you know what? I had a safe abortion. And that’s what counts.”

Other abortionists have shown abusive attitudes toward the women they claim to serve. “One day the doctor was in a hurry to go play golf. The poor woman was crying because he was rushing the procedure to dilate her cervix,” an abortion worker said. “She was in a lot of pain and really afraid. He got angry and told her, ‘Spread your legs! You’ve obviously spread them for someone else, now spread them for me.'”

Abortionist Michael Benjamin likewise showed complete contempt for women who seek abortions, saying, “I think it is basically a personality type who generally has her life out of control…. They drift, they tend to live for the moment in terms not only of their sexual practices but in terms of their economic lives and they are people in general who don’t think beyond the moment, who don’t plan for tomorrow, and who really will take life as it comes and deal with the rest later.”

Seeing these attitudes on display from abortionists, it’s not difficult to see why they receive so little respect from the medical community, and are seen as “the lowest of the low.”

These quotes show the inherent and inhumane attitude that is seemingly pervasive in the abortion industry, dehumanizing not only the preborn babies they kill, but the women who come to them for help as well. And on top of this, there is a glorification of abortion, not as a “necessary evil” but as something to be celebrated and cheered. It’s enough to make a person wonder how these hearts became so hardened and calloused to compassion and truth — and if there’s any way to save Ghazaleh Moayedi and others like her from the horrible work they do.

Editor’s Note: If you are an abortionist or an abortion staff worker, there is a way out. You can contact AbortionWorker.com for help in your specific situation.