Since 1945, the Lasker Awards have been granted by the Albert and Mary Lasker Foundation to recognize “the contributions of scientists, physicians, and public servants who have made major advances in the understanding, diagnosis, treatment, and prevention of human disease.” In a previous Live Action News report, Danny David detailed the reasons why the Lasker-Bloomberg Public Service Award to Planned Parenthood was based in anything but science.

But another piece of interesting information is this: Planned Parenthood founder Margaret Sanger’s most infamous “Negro Project,” motivated by her belief in eugenics, was funded in part by none other than Albert Lasker.

In 1939, Sanger penned a letter to Clarence Gamble regarding her desire to use Black ministers in furthering her organization’s agenda, because, she said, “We do not want word to go out that we want to exterminate the Negro population,” and if it did, these ministers could “straighten out that idea if it ever occurs to any of their more rebellious members.” This is the project that The Albert and Mary Lasker Foundation chose to fund.

Sanger not only founded Planned Parenthood, but met with members of the Ku Klux Klan, advocated eugenics, and supported the use of sterilization to rid the planet of the “unfit.”

In 1937, Mary Lasker, known then as Mary Woodward Reinhardt, was secretary of Sanger’s newly formed Birth Control Federation of America (BCFA).  According to Lasker’s website, Mary “made a donation to the American Birth Control League and subsequently joined its board.”

To obtain the funds, Sanger, Reinhardt and Sanger’s secretary, Florence Rose, drafted a report on “Birth Control and the Negro,” skillfully using language that appealed both to eugenicists fearful of unchecked black fertility and to progressives committed to shepherding Black Americans into middle-class culture, according to New York University’s website for the Margaret Sanger Papers:

The report stated that “[N]egroes present the great problem of the South,” as they are the group with “the greatest economic, health and social problems,” and outlined a practical birth control program geared toward a population characterized as largely illiterate and that “still breed carelessly and disastrously,” a line borrowed from a June 1932 Birth Control Review article by W.E.B. DuBois. Armed with this paper, Reinhardt initiated contact between Sanger and Albert Lasker (soon to be Reinhardt’s husband), who pledged $20,000 starting in Nov. 1939. (“Birth Control and the Negro,” July 1939, Lasker Papers)

Then, in November of 1939, Sanger wrote to Albert Lasker requesting the funds, to “help” the Black community in the South “obtain birth control information.” Sanger also wrote, “If we can get the Negro universities and the Negro medical groups behind this project I think it will go over, I think, really big….”

Mary and Albert later married and their participation in Sanger’s organization continued after the initial “Negro Project” donation. By 1940, a committee to extend and develop the movement of “planned parenthood” was formed and consisted of nearly 1000 members, including Albert Lasker.

A New York Times article revealed that in February of that same year,  Albert donated $10,000 to the Planned Parenthood Committee. 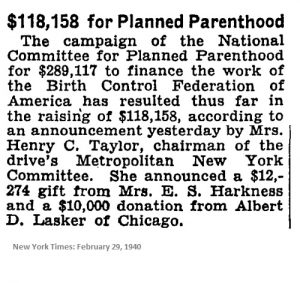 The following year (1941), the Laskers gave the Planned Parenthood Committee a total of $50,000 ($25,000 each from Mary and Albert), the largest donation the committee had received.

Interestingly, the Laskers established their foundation in 1942 — the same year that Sanger’s American Birth Control League changed its name to Planned Parenthood.

The Lasker Foundation website has even credited Albert Lasker as the one responsible for Planned Parenthood’s name:

Albert Lasker supported Sanger’s work as well, and he proposed a new name for her operation—one that better reflected its positive mission and that might ease its public acceptance. In 1942, his suggestion was accepted, and the organization became the Planned Parenthood Federation of America….

In 1943, another $50,000 was donated to Planned Parenthood Federation of America (PPFA) by Albert Lasker, according to the New York Times. 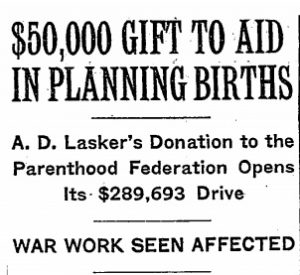 Mary Lasker continued her involvement with PPFA, and in 1945 was listed as a PPFA board member: 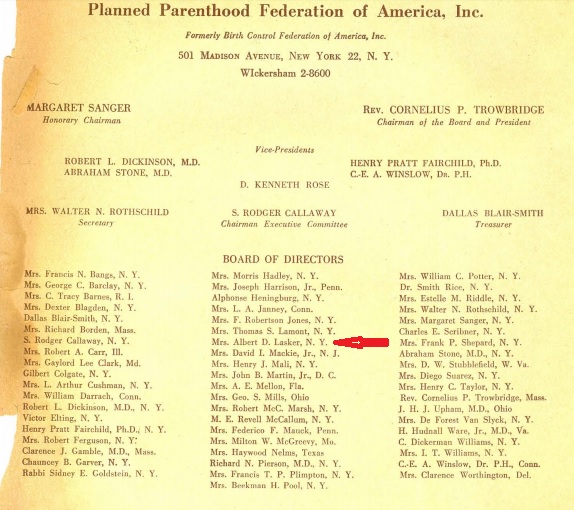 Mary Lasker Board of PPFA

In 1950, the Lasker Award given by Planned Parenthood – World Population was granted to Margaret Sanger, one of the first women to receive a Lasker award. According to an October New York Times report, the award read:

“To Margaret Sanger foremost in teaching families wise planning in birth control: Leader in influencing nations towards balanced population; living to see her beginnings in city slums grow into plans for a planet.”

Sanger was unable to receive the award in person because she was speaking to delegates at a luncheon of PPFA’s 13th annual meeting. The New York Times reported that at that PPFA meeting, their founder was advocating “a national Government-sponsored program of sterilization of the feeble-minded and victims of transmissible, congenital diseases.” 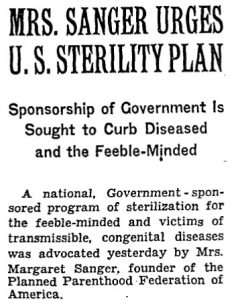 The “plan,” according to Sanger, was to “save innocent children from the cruelty of being born to such parents.”

Elaine Riddick was the victim of an identical eugenics project, funded by Clarence Gamble, and was forcibly sterilized in North Carolina in 1968. In the video below, Riddick stands next to her son, Tony, speaking as a witness to this flawed ideology:

Many believe that Sanger’s “Negro Project,” along with her eugenics advocacy, were partly to blame for the attitude many had about Black births, and the Lasker Foundation was unquestionably a part of promoting this horrible and harmful view.