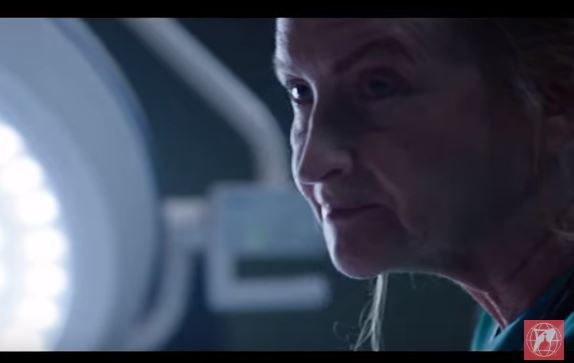 Julie Wilkinson worked at late-term abortionist Warren Hern’s abortion facility in Colorado. The emotional strain of her job led her to quit, and she eventually became pro-life. You can read about her pro-life conversion here.

Wilkinson was asked to take part in filming the pro-life movie Unplanned. She was asked to play the part of an abortion worker in one of the film’s most powerful scenes — the one depicting the abortion that compelled Planned Parenthood director Abby Johnson to leave the abortion industry. Wilkinson knew that taking part meant going public with her story. Although she knew this would be a challenge, she was happy for the opportunity:

I just felt like this was God saying, ‘It’s time.’ Because I knew – it’s a short scene, but I knew there would be people that know me personally, who would probably recognize me and I thought, this will force me to be public about what I did. And I think it’s going to help me get my story out better. So, I agreed to do it, and it was such an astounding thing.

The scene was shot in a large warehouse with a set designed to look like the interior of Planned Parenthood. Former abortionist Dr. Anthony Levatino, who narrated the abortion procedures videos for Live Action like the one below, played the abortionist in the movie.

For Wilkinson, accepting the part meant stepping back into her role as an abortion worker. She says that neither she nor Levatino really needed to rehearse. Instead, they looked into their past and called up their memories about being in the abortion industry. This was not easy for Wilkinson. The scene took eight hours to film, with repeated takes and changes to the set.

Despite the difficulty, Wilkinson knew that her presence, along with that of Dr. Levatino, gave credibility to the scene:

One thing I felt really good about was that I thought, there’s no way the pro-abortion people can come back and say, ‘You guys are just doing something you imagine happens.’ At this point, no one has personally approached me about that factor, but I always thought to myself, ‘He and I can both say yes, this is how it is.’ So, I thought there was value in that. So, I’m glad I was able to help.

She also wondered if Hern would see her performance, and how he would react if he recognized her.

Shawn Carney pointed out that Planned Parenthood has never tried to discredit the abortion scene in Unplanned. “[W]e have not seen Planned Parenthood come out and say, ‘These are the 5 medical inaccuracies of Unplanned, and this is why it’s propaganda. End of story.’ They practiced radio silence, which was probably smart on their behalf,” he explained. “But they didn’t go anywhere near that. And some of the pro-abortion crowd was. They were saying, ‘That’s Christian propaganda. That’s not what an abortion does. That’s not what it looks like.’ And then when you say that the medical staff in the room, those aren’t actors or actresses, those are former workers….”

Carney points out that including Levatino and Wilkinson in the movie worked against pro-choicers who might have wanted to discredit the film. It also showed the diversity of the pro-life movement, which contains converts from the abortion industry. He told Wilkinson:

Your humility and your willingness to go back, as you said, and relive this very dark time in your life, for a greater good that gives something that showed an abortion for the first time credibility and gave us an opportunity to say, ‘This is the pro-life movement. These are people that lived inside abortion facilities, that had abortions, that supported abortion in some way who are now pro-life.’ And the movie really displayed that, and you and Dr. Levatino really made that possible in the most direct way in the movie.

Wilkinson’s experience with Unplanned inspired her to share her story more often. She travels and speaks at pregnancy resource centers and pro-life meetings. Unlike many speakers, she does not charge a fee. “[Being in Unplanned] also really forced me to be brave about my story,” she said. “I’m telling my testimony now, at smaller crisis pregnancy things across Oklahoma, and I’m glad to do it. You know, if I can drive to you, it’s not gonna cost you anything. And I thought people would not think much of that story, but they seemed to appreciate it and I just figure every little bit helps with ending this Holocaust. Everybody – you might just be able to do a little something, but it’s something. And we have to.”

Unselfishly, and with no requests for payment, Wilkinson speaks out against abortion and encourages others to do the same.