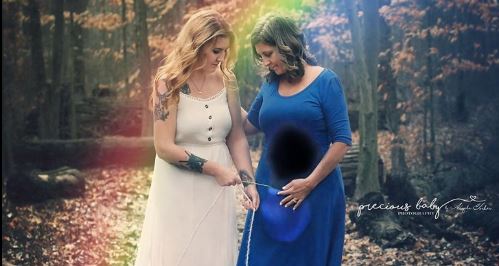 At age 15, Patti was raped. Three months later, she learned she was pregnant. While the abortion industry insists that women pregnant after rape must have the freedom to kill their children — whom society calls “rapist’s babies” — many rape survivors actually want to keep their babies. Patti was one of these women.

Patti told After the Abortion series photographer Angela Forker that she received an ultrasound photo of her baby, but when she showed it to her mother, she was met with ambivalence and a lack of compassion. Patti was told she would be having an abortion and no one seemed to care what her thoughts were.

“She said, ‘I can’t see anything but a blob,'” Patti explained. “I had no say in it, none! It ruined my relationship with my parents. I never felt loved by them again.”

"Lost" Do you feel lost? Do you feel empty? If you have had an abortion, you may be able to relate to Patti's story….

Although her abortion was committed against her will over 30 years ago, Patti said she has never forgotten it. “It’s a pain I remember every single day,” she admits.

“I have always thought of myself having a hole everyone can see. My daughter is my firstborn, my rainbow baby after the abortion,” said Patti. “She and her brother are mending the emptiness inside my soul to make me whole again.”

"Mending the Emptiness"Do you feel lost? Do you feel empty? If you have had an abortion, you may be able to relate to…

Today, Patti has found peace and forgiveness through Jesus and Christianity. And through her continuous healing, she has forgiven those who forced abortion on her. “I was reborn and forgiven,” she explained. “I forgave my parents and I forgave the guy who raped me.”

Studies show that more women who become pregnant from rape choose life for their babies. One study found that 73% of women pregnant from rape chose life, with 64% raising their children and 36% placing them for adoption. An additional study had similar results, finding that 75% of women pregnant after rape refused abortion. Many women who have obtained abortions after rape have stated that their abortions were worse than rape — another act of violence they chose to inflict upon someone else.