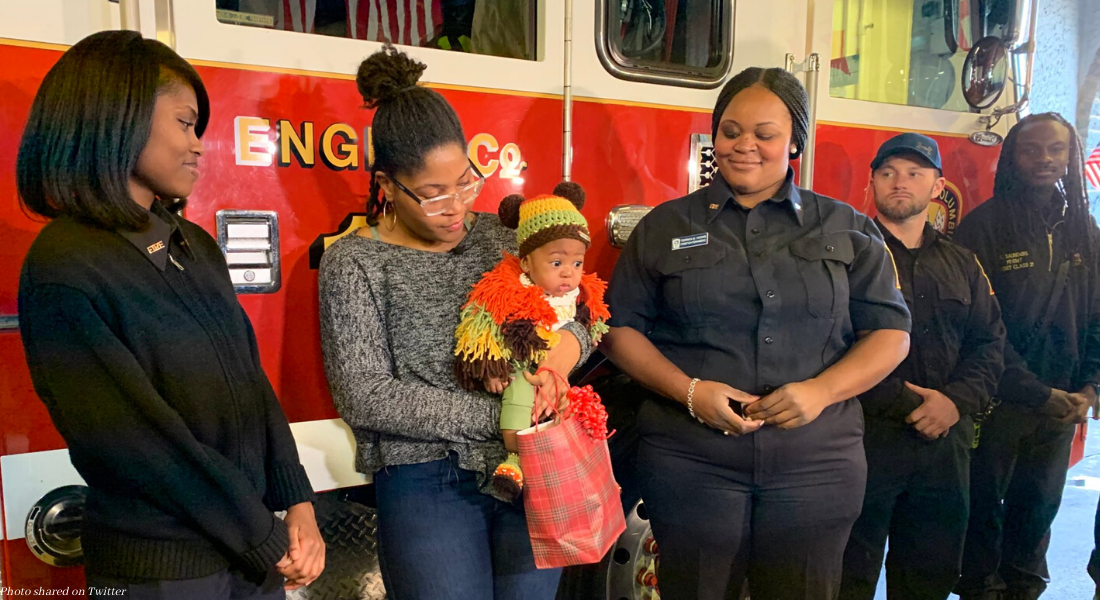 Cierra Duckett of Washington, D.C., was less than 30 weeks pregnant when she found herself going into premature labor. She had just been to see the doctor when she suddenly felt a rush of severe pain. Ultimately, she gave birth on the side of the road, with firefighters saving her daughter’s life. Now, she’s had the chance to say thank you.

Duckett and her husband pulled over on Minnesota Avenue SE, with the baby coming fast, WTOP reported. Luckily, an ambulance happened to pass right then, which her husband flagged down. “We were on our way to another call,” firefighter Terrika Hooks recalled. But with Duckett’s emergency situation, they knew they had to stop, with Duckett screaming that the baby was coming. “We looked, and the baby was right there,” Hooks said.

The baby, a girl Duckett named ZaNiyah, was still in the amniotic sac. When Hooks removed her, ZaNiyah wasn’t breathing. Meanwhile, Duckett listened in fear as the firefighters did all they could to save her daughter. “They kept saying she wasn’t looking too good,” Duckett said. “But we had hope and we had faith — and she’s a fighter. She really fought for her life.” Not only was ZaNiyah not breathing, according to NBC Washington, she also had no pulse at one point. But the tireless work of the firefighters saved her life.

ZaNiyah, born in March, is now doing well, despite her scary entry into the world. “She fit in the palm of my hands,” firefighter Shamia Pardlow said to WTOP. “And I have small hands!”

This month, nine months after ZaNiyah was born, Duckett returned to the fire station to thank the people who saved her, handing out awards. NBC Washington reported that Duckett struggled to speak through her tears, saying, “I want to say thank you. We really appreciate you all.”

It’s the day before Christmas, and the members of #DCsBravest get to meet little baby ZaNiayh, who they brought back to life after being born prematurely & pulseless on Minnesota Ave SE in March. We are about to hold a ceremony to honor those involved. pic.twitter.com/mKqp5U3T5t

Members of #DCsBravest receive Cardiac Care Save Coins from the mother of Baby ZaNiayh for their lifesaving efforts after the infant was born premature & pulseless on Minnesota Ave. SE. In return, they had a gift of their own to present. Future firefighter? pic.twitter.com/DUrpojGCR4

While Duckett presented awards to the firefighters, they gave ZaNiyah a tiny firefighter uniform in return. “I’m just so happy,” Pardlow said. “She’s my Christmas gift, too!”

As for Duckett, she plans to make sure ZaNiyah knows the story of her birth. “Just to let her know that she was a miracle,” Duckett explained. “She was saved.”

Premature babies have been able to survive being born as young as 21 weeks. They’re even more likely to survive if they’re given active care, versus palliative care alone. These tiny babies are proving more and more often that they are fighters who can survive outside the womb. They just need the proper medical care and assistance first.