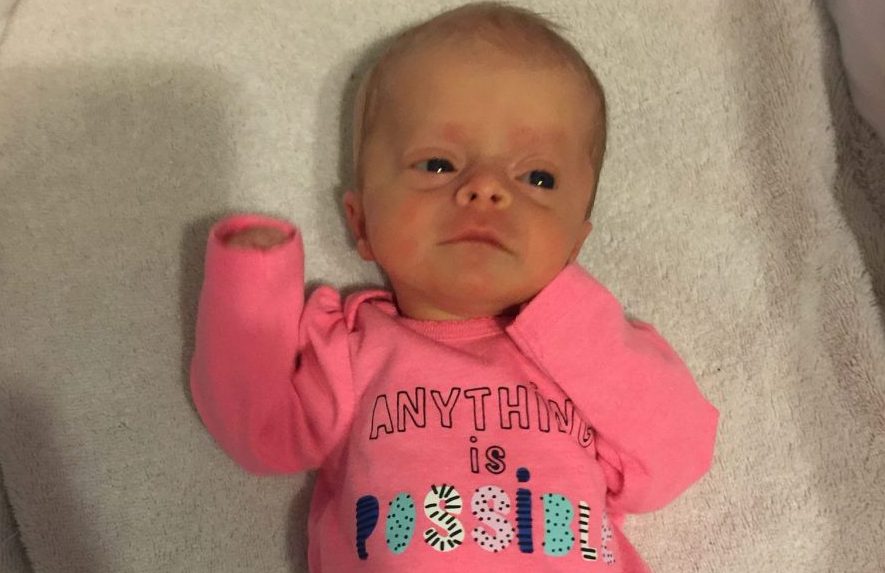 In September of 2016, Autumn Dunn and her husband David received heartbreaking news about their preborn daughter. After their 20-week ultrasound, doctors decided to send them to a high risk doctor. That’s when they learned that their baby girl had holoprosencephaly. The front portion of her brain did not develop properly and she wasn’t expected to survive. Doctors said that if the baby girl didn’t die in the womb, she would likely die during labor or shortly after birth.

“Just a few days before, we had my mom’s funeral,” Dunn told WQAD. “So my dad and I were planning on buying two plots so that they could be next to each other. The doctors gave me the option to terminate the pregnancy, but I knew that wasn’t an option for me.”

The couple named their baby Fiona Grace, and asked friends, families, and strangers to join them in prayer.

“We love her dearly,” Dunn wrote on Facebook, “and are praying for God’s healing hand and a miracle.”

And a miracle they have received.

After what seemed like a continuous stream of bad news, including that Fiona’s heart was enlarged, that part of her brain tissue was missing due to fluid, and that she had fluid around her kidneys, the day finally arrived for Fiona Grace to be born. She arrived via C-section on January 3, 2017. She needed some assistance with her breathing, but was doing surprisingly well. By the next day she was breathing on her own.

“Fiona Grace is putting up a good fight right now,” her mother wrote on Facebook on the day of her daughter’s birth. “Her heart is strong. God healed her heart. They are going to do an MRI soon to see what’s going on with her brain. The ultrasound on her brain showed that it wasn’t as bad as they thought it was.”

While her left kidney was dilated and she did have fluid on her brain, it was not life threatening as doctors initially said. She did have surgery to drain a cyst on her brain, but at two weeks old, she was sent home with her family.

“We went from thinking we were going to have to plan her funeral to we get to bring her home, and she’s healthy for the most part,” said Dunn.