Proof that pro-aborts’ arguments are faltering.

Some pro-aborts, like Marianne from xoJane.com, think abortion can be funny. They see no need for anyone to hold a serious attitude about it. But as a society, we wouldn’t tolerate a flippant attitude towards the torture and abuse of prisoners of war, and we certainly wouldn’t turn the murder of any innocent person into a comical event – at least not without some considerable social repercussions. But Marianne recently argued that for some women, abortion is a wonderful experience that they look back on with a smile, or the saving grace for a silly sexual mishap, or for others, a horrible experience that they have to laugh about in order to move forward. She also believes we are each allowed to hold our own definitions of when a person becomes a person. Her words are proof that pro-aborts still won’t accept what abortion really is. She makes that clear many times throughout her post, “Abortion Can Be Funny! Why We Don’t Have To Be SO SERIOUS About the Big A.”

The Humorous Side of Murder

There seems to be a growing number of pro-aborts becoming frustrated with the “abortion is a necessary evil” refrain chanted by a larger percentage of the pro-choice movement. Marianne is one of them. She believes that by calling abortion anything but fantastic and often carefree, pro-choicers are validating the pro-life mentality that abortion is wrong.  She writes:

I think that refusing to approach abortion as a terrible and serious thing actually does more to destigmatize it and open up the conversation than all the hushed tones in the world.

In addition, she finds no reason for anyone to be bothered by the fact that, for some people, abortion is a laughing matter. She says:

There are people who are going to treat [abortion] with humor – for any number of reasons, including everything from laughing in the face of trauma to not finding it traumatic at all.

Distortion of the Facts

Like many pro-aborts, Marianne seems unwilling to admit that the aborted child almost never looks like he or she does at the fertilized egg stage of human existence, or that life does in fact begin at conception. And she believes that she gets to have her own definition of what a fertilized egg is. She writes:

I love life-saving medical procedures. I love that they exist and that they are available to people.  I do not identify a fertilized egg as a “tiny baby” — and that is absolutely my right. It’s also totally OK if you do identify that fertilized egg as a tiny baby. I’m not going to try to talk you out of your personal definition. It’s a fundamental and personal difference in worldview.

But personal opinions aren’t the same as facts or scientific proof. They are the same as Hitler deciding that Jewish people are not members of the human race. Just because he said it, that doesn’t make it true, and it doesn’t excuse the torture that was done to an entire group of human beings. Luckily for us, we have dictionaries. And a fertilized egg, also known as a zygote, is defined as the brief first stage “in the development of a genetically unique organism.” Once the zygote implants in the uterus, it is called an embryo. And an embryo is defined as “an animal in the early stages of growth […] especially: the developing human individual from the time of implantation to the end of the eighth week after conception.”

During those eight weeks, a baby goes from a fertilized egg to a tiny baby. Most women who aren’t planning to become pregnant don’t realize they are pregnant until they miss a period. Between four and eight weeks’ gestation is when most women find out they are pregnant.  And when Marianne leaves out these facts, she’s doing a disservice to young women and girls reading her words.

In addition, according to the Centers for Disease Control, 91.4% of abortions are performed before 14 weeks’ gestation. There were 825,564 abortions performed in the U.S. in 2008. That percentage represents 754,565 babies. And 75.9% (572,794) of those babies were killed by curettage, in which the fetus and amniotic sac are sucked out of the uterus and ripped apart in the process. As you can see in the diagram below, this is in fact a “tiny baby”. 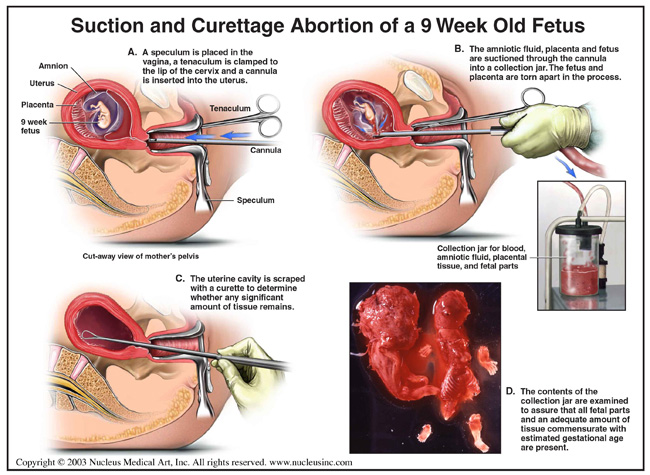 Not an egg, not a bunch of tissue – a baby with arms, legs, a face, toes, fingers, and all. Another 60,266 unborn babies (7.3%) are killed between fourteen and 20 weeks’ gestation, and 10,732 more (1.3%) are aborted after 21 weeks’ gestation. Anyone who understands this and takes this lightly or finds humor in it is just as bad as anyone who supports hate crimes and genocide.

The conclusion that can be drawn from a post like Marianne’s is that it seems the old abortion arguments aren’t working as well as they used to. The pro-abortion assertion that unborn babies are nothing more than a group of cells is constantly being defeated. Therefore, it seems that the new pro-choice strategy is to portray abortion as the punchline of a comedic tale of a one-night stand or a necessary, important, valid, and beautiful human right to be exalted. But will those who are anti-abortion yet pro-choice be able to stomach the request that they begin to love abortion? Or will this latest twist in the battle to keep abortion legal be the last desperate attempt of pro-aborts to gain back wavering supporters?