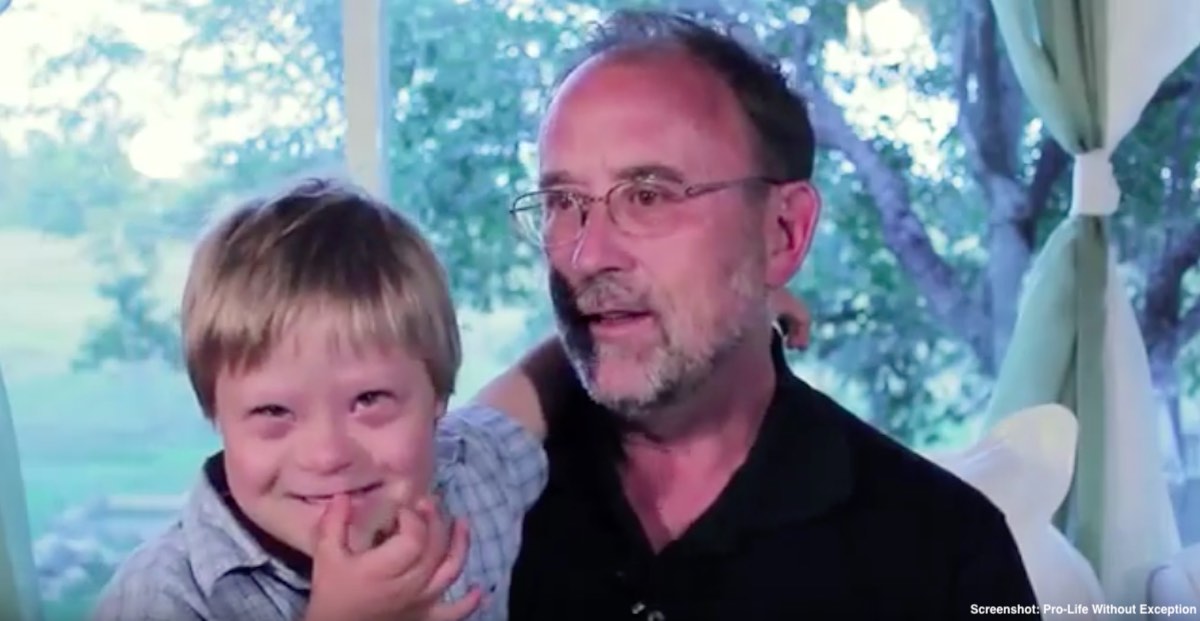 In the pro-life documentary Pro-Life Without Exception, Jim Hartman, father of Jesse, who has Down syndrome, spoke about the ways in which raising a child with the condition has improved his life. He also testifies to the worth of a child with a disability.

Hartman writes that when Jesse was born, and the family realized he was different, they were afraid for the future. But when they discovered Jesse had Down syndrome, they resolved to raise him with love. This has been deeply rewarding:

Sure, we had a little bit of fear when we first had a child who was different and we didn’t know what was wrong, and not knowing can be fearful. We resolved in our heart[s], mostly through prayer and [we made a] decision that he’s a blessing, and we treat him so. And boy, that turned out to be the case.

Although Jesse had unique medical issues, these challenges were surmountable:

Certainly, we had some challenges, but they were nothing compared to the blessings. So, there were some medical challenges along the way, but we had medical challenges with other children too… If we have a child who breaks a leg, we get it fixed. That’s just the way parents are. You don’t decide that it’s got a value – okay, it costs too much – because we would give everything we had for any one of our children, including him.

The challenges, the Hartman family decided, were not all that different from parenting a non-disabled child. Any child can have health issues, any child can be injured in an accident or get sick. As it would be unimaginable for a family to abandon a non-disabled child who was injured, it would have been wrong to abandon a child who had medical problems from the very beginning.

Jesse is extremely loving, and he has blessed his father and the rest of the family:

Certainly, there’s parts of Jesse that extremely enhance our family dynamics, and that have made us all better people for who he is and for how he loves, and how he interacts with each one of us. So, I would say that that definitely [has] been a great benefit to every single child in our family, to have had Jesse here.

There tends to be a certain quality of Down’s children that is unique amongst them. Many people say they’re more like each other than they are like us. And so, one characteristic of Down syndrome is their lovingness and their kindness and their affection, and some people say, the sweetness factor that they have.

READ: Community comes together to build tiny house for man with Down syndrome

Jesse is very good at comforting others and seems able to sense when someone is hurting and needs extra attention:

A lot of times, we think that when we first had Jesse, we were there for him. But boy, I can’t tell you how much he’s been there for us in our lives. And how he just loves up on people, and how he loves them and he hugs them and he listens, and he has a special intuition about what they need, and what they feel, and if somebody’s sad or they’re happy, he knows these things. [He has] almost an extra [sense] above what we have about those feelings…

I definitely see a big ministry that Jesse has to people. It’s almost like they’re an angel there, to love people in the moments they need to be loved. And sometimes his senses are uncanny in knowing somebody that’s hurting and going and meeting that person’s needs. And we just get to watch on, and go wow, that was amazing. He knows everybody.

Hartman says that Jesse’s presence has improved the lives of his siblings, and that his unconditional love and boundless kindness has brought comfort to many people. He has also taught his siblings valuable lessons:

Everybody engages him on his level. It’s certainly helped our children to understand that somebody who has a little different needs is not somebody that you have to shy away from. That you can engage with… Certainly, there’s a lot of other people in our lives now who have become very much a part of our lives who wouldn’t have become part of our lives otherwise.

Jesse seems to consider everyone his friend. He loves to hug people:

Everybody’s his friend, and he’s got to go around – it takes us quite a while to go out of a place, because he has to go and give everybody their hugs, tell them goodbye, tell them how much he loves them. Being so expressive, he definitely is the life and the energy in a party. Just the way that he loves his dad is amazing. And he loves everybody else the same way.

Sadly, 67% of babies like Jesse are aborted in the U.S. today1 and numbers are even higher in other countries.