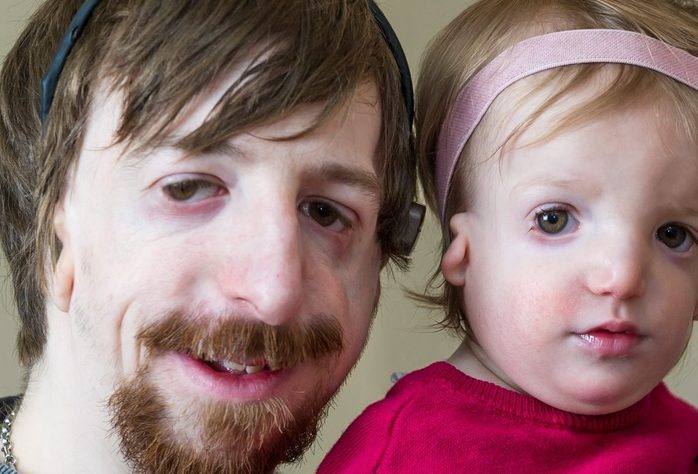 Like so many couples, Simon Moore and his wife, Vicky, wanted to have a baby. Unlike most couples, the Moores faced some tough decisions along the way— decisions that would have society judging and condemning them.

Simon Moore, 30, has Treacher Collins syndrome, a genetic disorder that affects facial structure and hearing. Individuals with TC are born with craniofacial disfigurements, including the absence of cheekbones and eyes that droop. Moore’s wife had been sterilized after giving birth to three daughters during a previous marriage, and was unable to conceive naturally. Because of this, the couple turned to IVF. They knew that PGD, or pre-implantation genetic diagnosis, was available, but they also knew that if their embryos tested positive for TC, they would be destroyed—something they did not want to happen. Therefore, the couple opted out of genetic testing on the embryos and went ahead with the procedure, facing a 50 percent chance that their child would also have TC.

“We had to go through a year and a half of genetic counseling before we even decided to go ahead with trying for a baby,” Vicky Moore told the Daily Mail. “We knew there was no guarantee how bad the TC would be— if the baby would have it at all. It could have been as minor as a slight hearing problem, to being born with no face whatsoever…Ultimately we didn’t care if our baby had TC. Simon has the ‘classic case’ and he’s amazing.”

At 16 weeks gestation, the couple learned that their preborn daughter did have TC.  The Moores were disappointed, but they were so happy to be expecting a baby and to hear her heartbeat that it didn’t matter. They named their daughter Alice, and say that she is the most special thing on earth.

Alice was born in February 2014, and her form of TC is considered mild. She has a high palate, a slight gap below her eyes which makes them droop, and malformed ears with difficulty hearing. People, including their neighbors, have weighed in on their decision to have a child with TC, calling the couple “cruel,” and even describing Alice as a gargoyle. But no one knows better what it’s like to grow up with such name calling as Simon Moore. He has had to deal with people pointing at him, staring at him, and even stopping to take pictures of him. But he copes with it just fine, and believes Alice will, too. He tells her everyday how beautiful she is.

“People point and stare, and Simon often gets funny looks when he walks around the village with Alice,” said Vicky Moore. “They think because of the way he looks, he can’t or shouldn’t be able to cope with a baby…People literally stop dead in their tracks and point at her.”

The Moores know that people don’t realize the pain they are causing, and they intend to raise Alice as they would any other child.

Alice is learning sign language with her father, who is a stay at home dad. She will eventually have surgery for a hearing aid. Her parents say they will leave any decisions regarding plastic surgery up to Alice when she is older. In the meantime, the family tries to educate others on TC, and why and how they made the decision to become parents.

“A lot of people don’t understand what we’ve been through,” said Vicky Moore. “They think we’re selfish or egotistical. But as long as people are saying bad things, we’ll keep on going and making you aware. People who are saying nasty things – it can happen to you. So please broaden your minds. We’re not hurting you.”

Editor’s Note: In vitro fertilization – or IVF – often leads to the destruction of human beings in the embryonic stage of life. Live Action and Live Action News do not support the use of IVF to create human life.