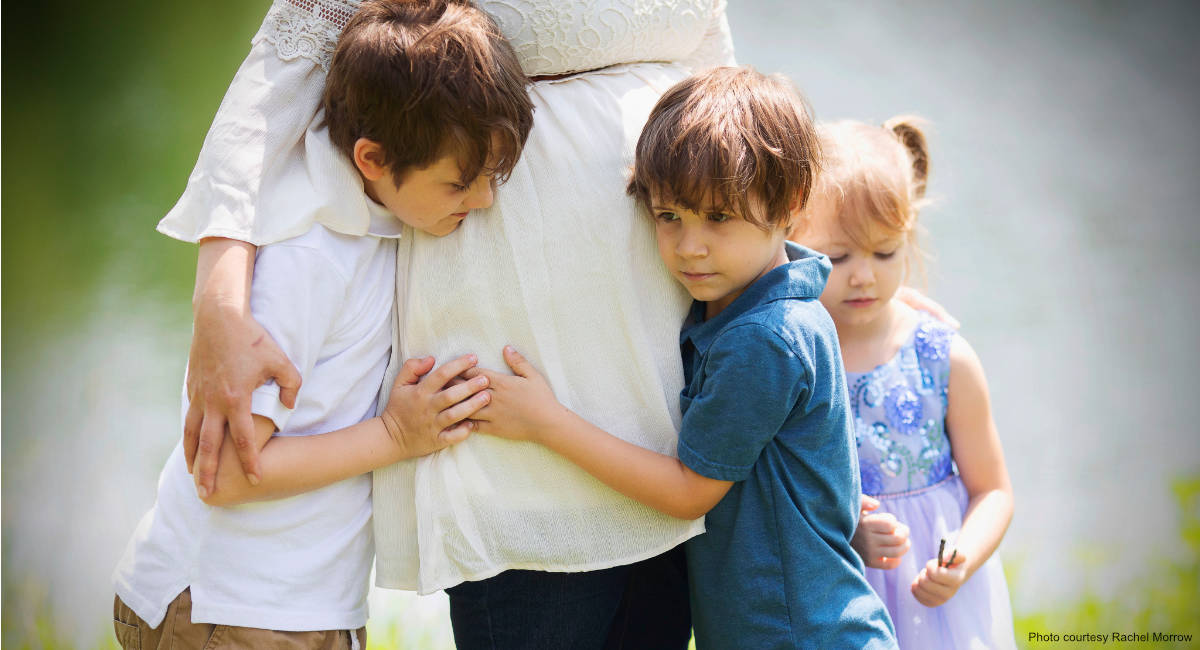 When the man from the funeral home walked into my hospital room at close to 10 p.m., it had been a long day. I stood at the foot of the hospital bed holding our dear little Ezra, and my husband stood beside me as we said our final goodbyes to the son I had delivered just hours earlier. At 36 weeks, I had been induced for the sake of my own health and given birth to our son, a baby boy with anencephaly. We had monitored his heart rate during labor, and at 4:30 his heartbeat was strong and steady. When I gave the final push at 4:36 and the neonatologist checked him over, there was nothing for her to hear.

Somewhere in those six minutes, his heart had beat its last.

We had known for over five months that this moment was coming. At a routine 12-week ultrasound, we heard the words, “there’s something wrong with his head.” Anencephaly is a neural tube defect that causes the skull not to form. It’s a rare condition that happens around 30 days after conception. There is no treatment or cure, and every case is life-limiting, with most babies passing away before or soon after birth.

We spent four months doing everything we could to honor the life of our son, but ultimately, in the moments after his birth as I was faced with the deformity that took his life, I just longed for one breath, one heartbeat, one sign of life to hold onto — but none was there.

We handed our son over to the funeral director and packed our bags for home — baby socks and extra outfits that we wouldn’t need, Christmas ornaments with our son’s footprints, a box of memoirs from the hospital including baby hospital bracelets that they had printed “just in case.” The funeral director embraced our son and promised to honor his life, mentioning that he and his wife had two children at home and two in heaven that they lost to miscarriage.

In October 1988, President Ronald Reagan dedicated the month of October as Pregnancy and Infant Loss Awareness Month. It became a month set aside for programs, ceremonies, and activities that recognize the loss so many parents have experienced. On that day, he said, “When a child loses his parent, they are called an orphan. When a spouse loses her or his partner, they are called a widow or widower. When parents lose their child, there isn’t a word to describe them.” Ronald Reagan understood the weight of losing a child, as he lost a daughter that was born four months premature. It has been 33 years since he set up this month of remembrance, yet the tendency to be quiet about pregnancy and infant loss remains the same.

Our family is very familiar with pregnancy and infant loss. In addition to our stillborn son, in 2005, at an eight-week ultrasound, I found out I was carrying what was termed a “non-viable” twin pregnancy. I was in disbelief and waited at home, hopeful the diagnosis was wrong but ultimately miscarrying a week later. In 2020, I went into spontaneous labor at 16 weeks and gave birth to our son, Asher. We had been to an ultrasound just weeks before that showed no issues, making his loss even more unexpected and devastating. Months later, in October, I again found out I was pregnant, this time with an ectopic pregnancy that required surgery — and it became another loss I now carry in my heart.

My other living children know about the loss of the twins — they point out twins on TV shows or in public. My children remembered them… even the children that were born after their loss. One of my sons was less than two years old when we lost our twins but he remembers them. He loves his siblings — the ones that are here and the ones that are gone — and often makes comments about seeing them in heaven. He doesn’t remember them because of his own experience, but because we have talked about them.

My now two-year-old son will also not remember our stillborn son. He’ll see himself in photos and know he was there but he won’t remember him unless we tell him the story. And that’s what Pregnancy and Infant Loss Awareness Month is about. Our children that are waiting in heaven will remain in the hearts and minds of our other children. Their love will remain, even though they are no longer present. This month is important to so many families as we honor our little ones and carry on in life without them.