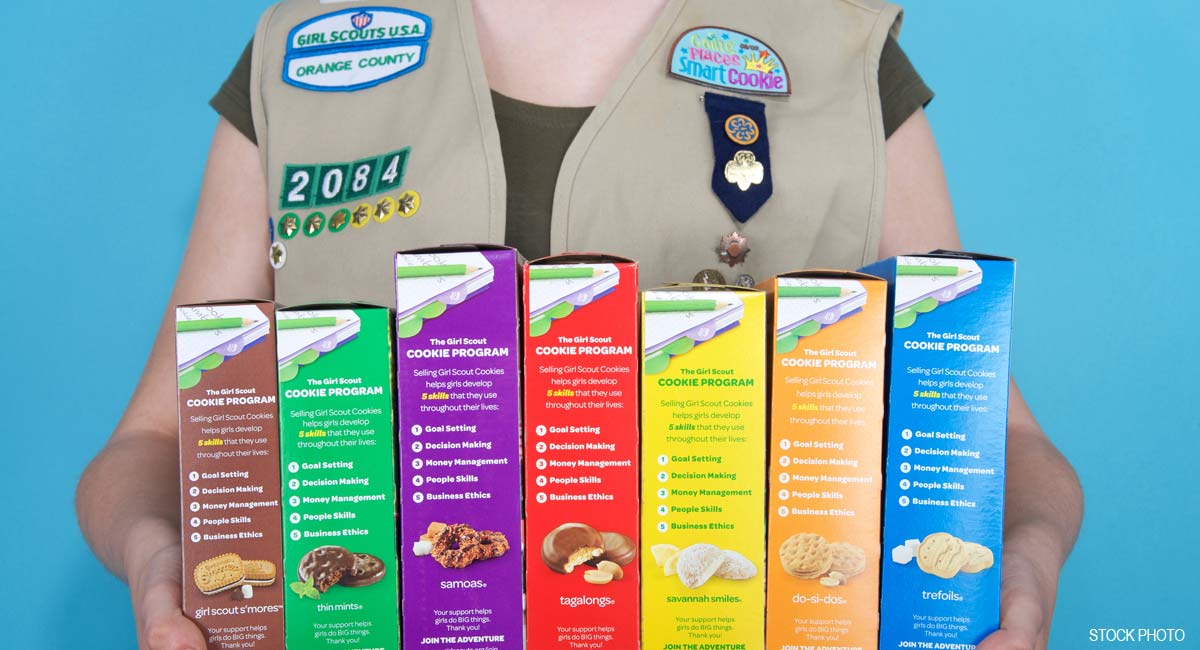 UPDATE 3/13/2019: Further evidence has been discovered by Christy Volanski of MyGirlScoutConcil.com proving the Girls Scouts USA are pushing liberal, extreme feminism on young girls. As shown in the Girl Scouts’ Instagram post below, the group takes part in MAKERS, a relatively new media brand that aims “to accelerate the women’s movement through stories of real-life experiences that ignite passion and action.”

The Girl Scouts were present at a MAKERS event that included a woman named Nadia Bolz-Weber, who, as seen in the video below, attacked the notion of purity rings and saving sex until marriage. She asked women to send her their purity rings so she could melt them down to create a “vagina sculpture” which she presented, on stage to Gloria Steinem. In addition, MAKERS celebrates Amy Richards, co-founder of the Third Wave Foundation and woman who promotes the selective reduction abortion of her triplets. And MAKERS also featured Letty Cottin Pogrebin, co-founder of Ms. Magazine, who shared her opinion of how horrible backroom abortions were before Roe v. Wade. It has been proven that the number of illegal abortions committed prior to abortion’s legalization was fabricated in order to push the pro-abortion agenda.

Exposing young girls to this type of extreme feminism, where casual sex and the killing of children in the womb are applauded, sends the dangerous and self-centered message that our actions have no consequences and what we want should come before what is right. The Girl Scouts may deny choosing a side in the debate on abortion, but it’s clear where their true opinions lie.

3/5/2019: The Girl Scouts USA has long been under scrutiny from conservatives for their alleged pro-Planned Parenthood stance. While the organization states on its website that they “do not take a position or develop materials on” abortion, recent social media posts from the group along with a confirmed relationship with Teen Vogue support the idea that the Girl Scouts are a pro-abortion organization.

The Girl Scouts have long denied a connection between their organization and Planned Parenthood, going so far as to state that they don’t have “a relationship or partnership” with the abortion corporation, yet admitting that individual troops are allowed to partner with local Planned Parenthood facilities. While concerns and controversy still linger, it seems that the Girl Scouts are now practically shouting their abortion support from the rooftops.

In June of 2018, the Girl Scouts tweeted a thank you to Teen Vogue regarding a Teen Vogue Summit in which they participated. This summit has featured “reproductive justice” as one of its topics. “We had a blast,” they said. “Talk about feeling empowred.” Along with the tweet was a video which included the pro-abortion mantra, “my body, my choice, my rights.” It’s a clear message from the Girl Scouts. They falsely believe that abortion is a right, rather than a gross attack on human life and human rights. 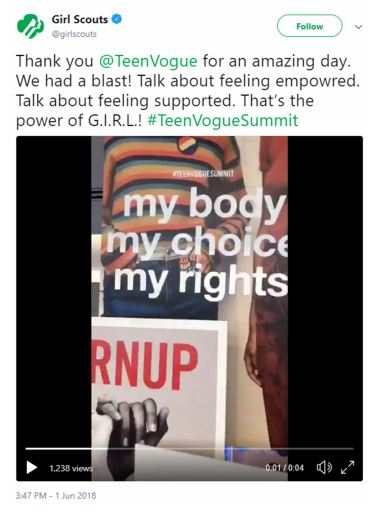 In November of 2018, the Girl Scouts again tweeted support for Teen Vogue, thanking them for “extending the sponsorship opportunity” for a Teen Vogue Summit. Teen Vogue Summit events include topics such as “an honest and intimate conversation on healthy, safe, and pleasurable sex, in a new age of inclusivity.” The events have featured former Planned Parenthood CEO Cecile Richards, and manager of Youth Organizing for Planned Parenthood Sharim Hossain as speakers. In addition, Teen Vogue has recently been outspoken about their support for late-term abortion.

Girl Scouts is excited to be in sunny LA at the #TeenVogueSummit. We’re all about tackling pressing issues that girls deal with on a daily basis and are joining forces to create a better world for future leaders. 💚 @TeenVogue—thanks for extending the sponsorship opportunity!

On December 26, 2018, the Girl Scouts got straight to the point on Instagram. In a #WednesdayWisdom post, they celebrated Girl Scout alum Sandra Day O’Connor, the first woman to sit on the Supreme Court, highlighting O’Connor’s “duty to ‘help people at all times.'” They celebrated O’Connor because, as they say, “she was a key swing vote in many important cases, including the upholding of Roe v. Wade.” It doesn’t get more clear than that. The Girl Scouts support Roe v. Wade, which legalized abortion in the United States through all nine months of pregnancy, overruling multiple state laws enacted by the elected representatives in those states.

This week’s #WednesdayWisdom comes from Sandra Day O’Connor. This notable Girl Scout alum made history as she received unanimous Senate approval and became the first woman justice to serve on the nation’s highest court in 1981. Honoring her duty to “help people at all times,” she was a key swing vote in many important cases, including the upholding of Roe v. Wade.

Christy Volanski, co-editor of MyGirlScoutCouncil.com, told Live Action News, “Girl Scouts’ FAQs claim the organization takes ‘no position’ on the issue of abortion. Given these recent examples – like Girl Scouts partnering in and promoting pro-abortion events, sharing the abortion industry mantra ‘my body. my choice. my rights,’ praising Roe v. Wade, and promoting pro-abortion role models to girls – that just doesn’t add up.”

As for politics, the Girl Scouts did take part in President Trump’s inauguration parade, and they took a lot of heat for it. They responded to the complaints by saying that they are a “nonpartisan nonprofit organization that by law cannot take positions on political candidates or parties” — and then went on to participate in the anti-Trump Women’s March the day after the inauguration.

Unfortunately, the Girl Scout connection to abortion advocacy doesn’t stop there. The organization is also a member of the Coalition for Adolescent Girls, which advocates for abortion and comprehensive sex ed. Other members include Planned Parenthood, Marie Stopes International, the Institute for Reproductive Health, and the Bill and Melinda Gates-funded Women Deliver, which focuses on access to abortion and contraception.

While the Girl Scouts say that none of the money raised from cookies goes to Planned Parenthood, with all the other pro-abortion evidence stacked against them, it appears that this organization is very much against pro-life values.

“It’s time for all pro-life families still supporting the [Girl Scouts] organization through membership or cookie purchases to take a long hard look at what they are funding, endorsing and/or representing,” said Volanski.