One adoption story gripped hearts everywhere in 2017. An Albuquerque, NM police officer encountered a meth-addicted woman while in the line of duty and then the unexpected happened. Albuquerque Police Officer Ryan Holets noticed that Crystal Champ was pregnant and knew he needed to help.

“Realizing that she was desperately wanting someone to adopt the baby, I just felt God telling me, ‘Tell her that you will do it because you can. You can,’” Holets told CNN. “I’ve gotten tired of seeing so many situations where I wanted to help but can’t and in that moment I realized that I had a chance to help.”

After baby Hope was born, she suffered withdrawals and dealt with weeks of medical treatment, but overall she is doing well.

“Her father and me love her very much. We did not give her up because we did not want her,” Champ explained.

Baby Hope is an example of how even a baby someone thought no one would want is indeed a wanted baby. Holets didn’t even know he wanted a baby until he encountered Hope’s mother.

As Live Action News recently reported earlier this year, it’s no coincidence that Holets wanted this baby. Special needs adoptions are on the rise:

According to data collected by the National Council for Adoption (NCFA), in 2014, children with special needs comprised almost nine-tenths (61,341 or 88.5 percent) of unrelated domestic adoptions. The Council, which began publishing data on adoption in 1985, found that between 2007 and 2014 the number of special needs adoptions nearly doubled—increasing from 32,402 in 2007 to 61,341 in 2014.

And the stories are easy to find. In 2017 alone, Live Action News has told tales of modern day heroes, called to love those whom others have deemed not worth fighting for. The story of Adrianne and Jason Stewart who adopted little Maria from the Philippines, tugged at heartstrings particularly because Maria was born without arms and legs.

“When we found out daughter we did not think we were qualified or prepared enough to parent a child like her, a child born without arms and legs, but we knew that we could love her and that loving her was what mattered most,” Adrianne Stewart wrote in a post for Love What Matters.

Loving Maria changed everything for Stewart.

“She has given us far more than we will ever give her,” she wrote on Facebook. “She is so full of joy and light, and is an inspiration to all who meet her. We put limits on her abilities and then we see her doing exactly what we thought she was not capable of.”

One story from June really tops all the exceptional adoption stories of the year – a couple that so deeply desired to love special needs children that they have adopted 88 of them over the years.

“The children I took in were expected to die,” Camille Geraldi told CNN. “But so many of them have lived.”

Camille and her husband welcomed children with conditions including intellectual disabilities, spina bifida, autism, and Down syndrome in their home. While some people might insist that having so many children in and out of the house would make it impossible to really serve each child well, that’s usually not the case, and it is definitely not the case with the Geraldi family. As CNN notes:

The youngest, Isabella, is 8. Born to a cocaine addict, the girl was deaf and blind as an infant. Today, she is performing above her grade level in school.

60 minutes visited the family twice, beginning in the 1990s:

Another adoption story that touched lives in 2017 was that of the McKinney family. Live Action News reported that the McKinneys adopted Daley even though she was supposed to die when she was born due to missing 70% of her brain. Daley had been in the process of being adopted by another family when she received her diagnosis and the first family backed out:

Daley’s diagnosis at the time, Ann says, was ‘very dismal. Her head was swelling because spinal fluid was filling the space where brain should have been. She had surgery to have a VP shunt placed in her brain to drain the excess fluid.’

It was at this point that Daley’s first adoptive family chose to disrupt the adoption, feeling they were ill-equipped to parent a child in Daley’s condition. Christian Homes and Special Kids (CHASK), the adoption agency, labeled Daley as a ‘hospice adoption.’ Two neurologists said she wouldn’t likely live to be a year old. Daley has multiple diagnoses, including hydrocephaly, substantial brain deficiencies, spastic quadriplegia cerebral palsy, epilepsy, cortical visual impairment, and scoliosis.

But that didn’t stop the McKinneys, who set out to adopt her immediately, feeling that they ‘just wanted to love her for the time the Lord allowed her to be with us,’ says Ann.

Daley is currently eight years old, defying all the odds that medical professionals insisted were against her. The adoption so encouraged the McKinney family that it moved them to pursue another child, as Live Action News reported:

[They] are in the process of adopting another little boy from China, who has nearly all the same diagnoses as Daley. ‘We would have never considered adopting Teddy, had it not been for the joy and confidence Daley has given us!’ says Ann. ‘Every single child is a gift from our Lord. There are no mistake children. We believe that each of our children were hand-picked by God for our family, and we love the way He has built our family.’ 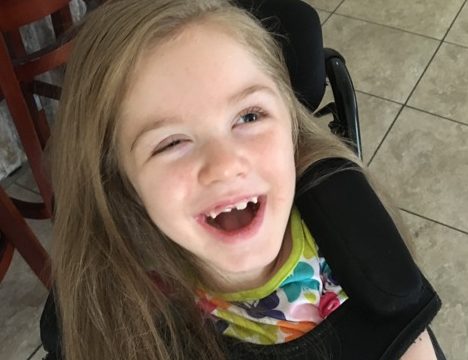 Daley Faith – her story of adoption by the McKinneys. (photo: Ann McKinney)

While the abortion industry, including Planned Parenthood, tries to lead the public to believe that children with special needs are a burden on society, the fact is the rhetorical spin is not based on reality; rather, it is based on marketing to find customers. Even the most extreme special needs cases are wanted babies to the parents called to raise them.

Ask the Holets, Stewart, Geraldi and McKinney families if their children were worth fighting for despite their special needs. And they will tell you what Planned Parenthood won’t: Every baby is a wanted baby.