A report on adoption numbers published earlier this year shows that over the past several years, the number of special needs adoptions has nearly doubled, despite declining adoption numbers overall.

According to data collected by the National Council for Adoption (NCFA), in 2014, children with special needs comprised almost nine-tenths (61,341 or 88.5 percent) of unrelated domestic adoptions.  The Council, which began publishing data on adoption in 1985, found that between 2007 and 2014 the number of special needs adoptions nearly doubled—increasing from 32,402 in 2007 to 61,341 in 2014. 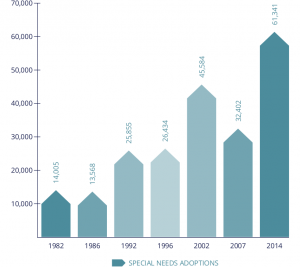 According to the report, entitled, “National Adoption Data Assembled by National Council For Adoption,” by Jo Jones, Ph.D. and Paul J. Placek, Ph.D:

…the high number of “special needs” adoptions can be attributed to the fact that the definition is not necessarily the customary societal understanding of special needs.

In foster care, “special needs” may refer to any child who qualifies for adoption assistance due to special factors such as being an older child, having a particular racial or ethnic background, being part of a sibling group who need to be placed together, or having physical, mental, or emotional disabilities or medical condition.

In 2014, there were 4.6 domestic infant adoptions per 1,000 live births in the United States indicating that less than one-half of one percent of infants were placed for adoption, NCFA reported.

In addition, only about one percent of unmarried mothers chose adoption for their infants.

But the report also found that infant adoptions have remained steady, despite the fact that the number of births to single parents has decreased significantly since 2007.

Preliminary estimates of Adoption Statistics for fiscal year 2015, published by the U.S. Department of Health and Human Services Administration for Children and Families, Administration on Children, Youth and Families, Children’s Bureau, show that nationally, 53,549 were adopted out of the foster care system in 2015 while 111,820 were waiting to be adopted.

A report on adoptions, published in April 2017 by Fox News, stated that the majority of children adopted out of foster care were five or younger, while those still waiting to be adopted were seven or older.

Tragically, more than 20,000 foster youth “age out” of the system each year without having found an adoptive home, Fox News wrote. 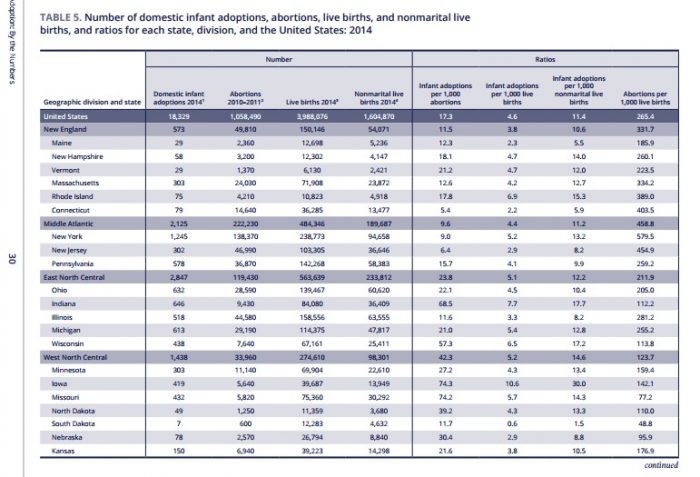 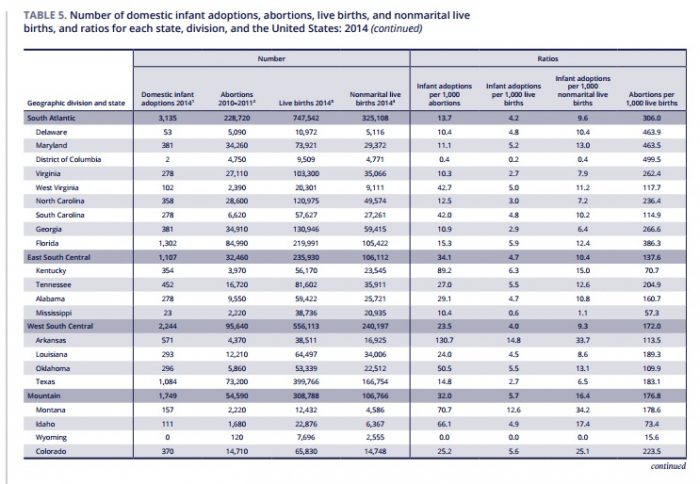 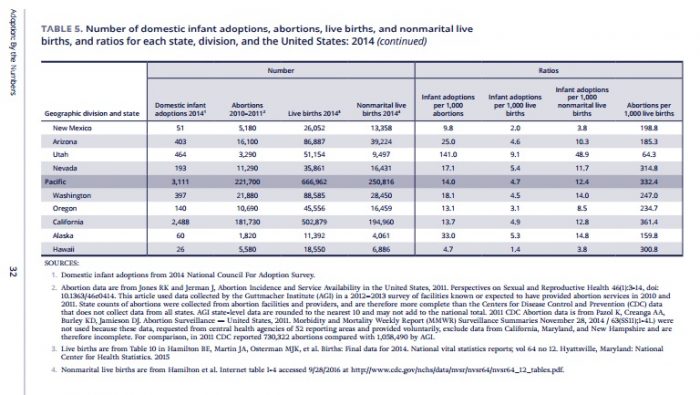 NCFA also discovered several interesting facts that may indicate which states are having more success in offering the adoption option to women who may seek an abortion:

There are five states which have infant adoptions per 1,000 nonmarital live births ratios twice as large as the national average of 11.4 in 2014—Utah (48.9), Montana (34.2), Arkansas (33.7), Iowa (30.0), and Colorado (25.1)—indicating higher relative success than the national average in providing adoption assistance to unmarried women who would otherwise parent the baby.

According to the NCFA, unmarried females who became pregnant were more likely to place their children with adoptive families. In order to determine the average number of potentially adoptable infants, NCFA developed what they referred to as the “Adoption Option Index,” to help, “gauge the level of services and to obtain more resources to make the adoption option a choice selected more often.”

“This is the first index ever constructed to indicate the relative frequency of infant adoptions to that group of pregnancy outcomes that could potentially yield adoptions,” the authors wrote.

Using the formula below, NCFA determined the average Adoption Option Index in the US for 2014 was 6.9.

After crunching the numbers with this formula, NCFA found that four states (Utah, Arkansas, Montana, and Iowa) had adoption option indexes three or more times higher than the national average.  There were two to four adoptions for every 100 abortions plus births to unmarried women in these states.

“This suggests that in these states women may have more extensive counseling, services, and facilities to orient pregnant women towards adoption—among other factors,” the authors wrote.

NCFA concluded in their analysis of the data that “adoption choices may depend on support services.”

Children were adopted into families in the United States from several countries in FY 2016, including Canada, Ireland, Mexico, Austria, Great Britain, the Netherlands, Austria, and Switzerland, according to a recent State Department report.

But the report also found that the numbers of international adoptions have been in decline.

In 2015, there were 5,648 adoptions — more than 76 percent below the high of 22,884 in 2004.
The Department identified three major issues impacting the viability of intercountry adoption:

Chuck Johnson, CEO of the NCFA, told Fox News that he estimates approximately 1 million families are trying to adopt at any given time. “No matter where they go, unless they’re super lucky, they’re going to be in for a long wait,” Johnson said. “They’re going to be in a slow, painful process for foster care or in this massive competition for the limited number of healthy infants — and that’s where the situation is ripe for fraud. There are so many families who want to adopt, and so few options for them.”

To date, 100 million Americans have either been personally touched by adoption within their families or know someone who has adopted or has been adopted, according to NCFA.

Despite the dropping numbers, it is plausible that the support provided by pro-life pregnancy centers to women experiencing unplanned pregnancies could be having an impact, enabling more women to keep their babies.

But sadly, not enough are being reached.

According to the latest abortion statistics, there were at least 926,200 abortions in 2014, with Planned Parenthood performing that largest share of those procedures (about 35 percent).

Live Action News has documented that Planned Parenthood offers few services to pregnant women other than abortion. This includes a stunning lack of prenatal care, which the organization’s own reports show has decreased nearly 70 percent since 2010.

Adoption referrals were not much better. The report showed that while Planned Parenthood performed a staggering 328,348 abortions, they referred just 2,889 women to outside agencies for adoption. (Naturally, Planned Parenthood counts these outside referrals as “services” it provided.)

In addition, Planned Parenthood’s 2015 numbers reveal that the taxpayer-funded corporation performed nearly 114 abortions for every one adoption it referred out.