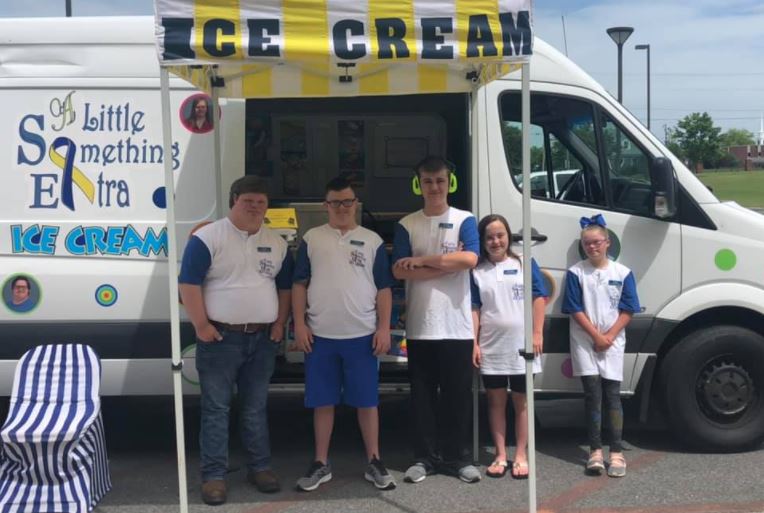 Hunter Norwood, a 19-year-old boy with Down syndrome, was the guest of honor at the 50th convention for the International Association of Ice Cream Distributors and Vendors last November. Hunter is the CEO of A Little Something Extra, an ice cream truck business based in Dawson, Alabama. The idea for the company was developed by Hunter’s mother, Michelle, who teaches special education. Michelle was worried that living in a rural community meant Hunter “would never experience things that bring gratification, such as a paycheck and a job title.”

It was while she and her students were running a snack bar at their school that Michelle thought to herself, “I need something like this for my son.”

Then, in 2017, Michelle patronized an ice cream truck for the first time when she visited her sister in Memphis. This sudden burst of inspiration motivated Michelle to spend months researching and jotting down ideas that came to her at two in the morning.

Posted by A Little Something Extra Ice Cream on Tuesday, July 28, 2020

“Everything came together,” Michelle said, “from the freezer to the ice cream distributor to the truck.”

A Little Something Extra launched in August of 2018, with the business being named for the extra chromosome that causes Down syndrome. The truck sells pre-packaged frozen items at nursing homes, schools, golf tournaments, birthday parties, and other special events. Each of the employees serving the frozen treats are identified as “ice cream experts” on their nametags.

“The whole goal is to give them an opportunity to socialize, be seen and valued,” Michelle said. “I want the ice cream truck to be a tool for advocacy and awareness.”

The outreach efforts of the business have been incredibly successful. Over the past two years, two dozen young people have been trained to work on the ice cream truck.

“I had high expectations, but each worker has come in and blown me away with their ability,” Michelle said. “It really has been amazing.”

Michelle believes “there’s something about ice cream when it’s served by our ice cream experts. You might get a brain freeze, but your heart melts. It has restored my faith in humanity.”

READ: Twitter censors picture of three-year-old child with Down syndrome

Just last year, Michelle published a book about Hunter called, “Stars in My Eyes.” She wrote it because she wanted “to pave the way for others to see that our life is so much better because we have Hunter.” The book was named for the Brushfield spots present in the eyes of people who have Down syndrome.

“The stars are there to remind us of their purpose and ability,” Michelle said.

Michelle was inspired to write another book after delivering a talk about her son Hunter at an elementary school, where she said his traits related to Down syndrome were like his “superpowers.” Michelle believes thinking of Down syndrome this way “could change their view of the whole world.” And she hopes the ice cream truck helps to change the world around them “one ice cream at a time.”