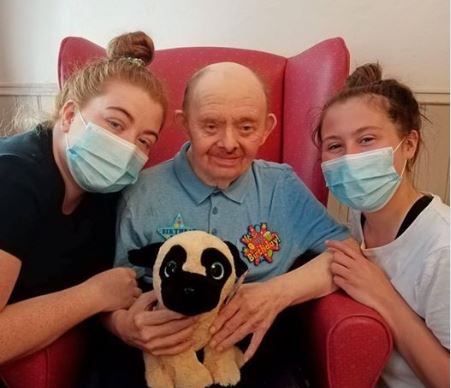 George McCullagh is thought to be the oldest person living with Down syndrome in Northern Ireland and the United Kingdom. His parents were told he would not live to survive his teenage years, but he celebrated his 76th birthday on June 1st — social distance style — and his family showed support of a pro-life motion to reject an extreme abortion law allowing abortion up until birth for preborn babies diagnosed with Down syndrome.

As the Northern Ireland Assembly prepared to vote on a motion to reject the extreme abortion law imposed on the nation by the UK Government, Paul Given, one of the DUP MLAs working to stop the law, said the family supports the pro-life motion. McCullagh’s sister told him, “We love our ‘wee brother’ and he has brought us so much love and joy. He, himself, has had a great life.”

The only son of Mary Elizabeth and William George, McCullagh has three sisters. After he proved the doctors wrong and continued to thrive in his teenage years, the doctors said he wouldn’t live beyond age 20. “When he saw 20 they kept quiet after that,” his sister Eileen Miller told the Belfast Telegraph.

She added that he has always loved attending church, watching Westerns, listening to music, and he enjoyed a happy childhood during which he would help with the animals on the farm. He now resides at Marina Care Home where his sisters say he is “well looked after.”

Due to the COVID-19 pandemic, McCullagh’s family was not able to spend his birthday with him, but Miller dropped presents and cake off for him and called him for a birthday video chat along with his other two sisters.

“It was emotional for us,” Miller said. “We all know the reasons why we couldn’t visit him today. He brings so much love to the family and we’re delighted with the efforts Marina Care Home staff have made to look after him.”

He also received birthday messages from around the world. “George has been involved with pro-life for a long time and he’s become quite a celebrity through that,” she explained. “He’s loving all the attention.

“He was supposed to go to London with the Downs Syndrome Association, but if he’s able to do it in the future he’ll be there,” added Miller. “We’ve always said that if George can help save one life he’ll have done more than most.”

Advancements in medicine have more than doubled the average lifespan of people with Down syndrome. In the 1980s, they did not usually live beyond age 30, but today, their lifespans have become similar to those of their typical peers. Misconceptions about life with Down syndrome still exist and preborn children with the condition are cruelly targeted for abortion.

Though it will not change the law, the Northern Ireland Assembly voted to reject the extreme abortion law in hopes that it will affect the outcome of an upcoming vote regarding the matter in the UK Parliament.