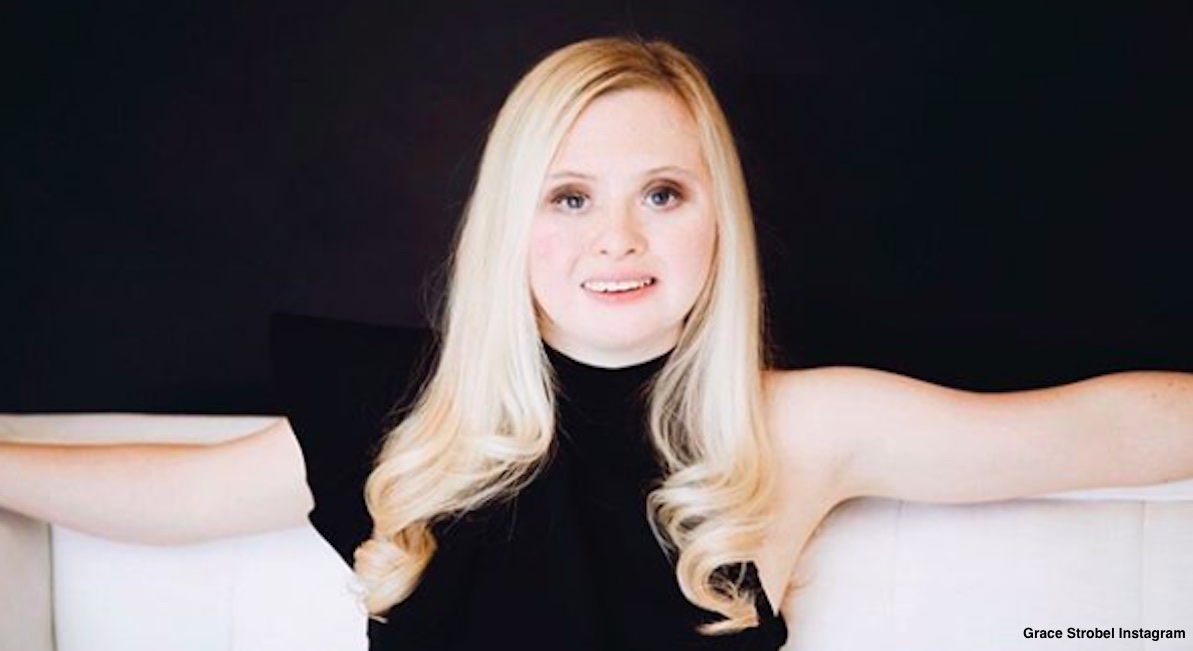 Grace Strobel is an up-and-coming 23-year-old model from St. Louis, Missouri. Her pictures exude confidence, joy, and light. Viewers are first struck by these qualities, and then by something else. Grace is one of a small but growing number of models who have Down Syndrome.

When she was born, well-meaning healthcare professionals warned Grace’s parents about all of the things that she wouldn’t be able to do. But her parents Linda and Jeff had other ideas. “We didn’t want to look at Grace as an accumulation of things wrong with her. We wanted to see how she could develop in every aspect of her life,” Linda told the National Catholic Register. “There were no different expectations for her than for our younger child [Laney]. It was always a big focus for us to have her develop her full potential, whether language, academics, healthy diet, exercise, social life … you name it, we were working with her.”

Several years ago, Grace started giving presentations to local schoolchildren about what life with Down syndrome is like. As Linda noted, “If you explain the things she deals with on a daily basis, physically and emotionally, and demonstrate it to the students, it becomes not scary anymore. People are afraid of what they don’t understand. If we can help them understand, they will look at people with disabilities in a different light — not out of pity, but out of respect. We want to have people with disabilities respected and valued as part of our society.”

Grace has shared her presentation, #TheGraceEffect, with over 3,000 children to date.

READ: ‘Beautiful in our own way’: Gymnast with Down syndrome gets modeling deal

In August of 2018, Grace learned about an Australian model with Down syndrome and told her mother she wanted to become a model, too. Linda hired a professional photographer and shared the results of their shoot on social media. Just two weeks later, the post had been shared 220,000 times. Since then, Grace has modeled in local fashion shows and has been featured in local and national magazines and newspapers. After Linda reached out to Ola Hawatmeh, a St. Louis-based fashion designer, Grace walked the runway at the Atlantic City Fashion Week in New Jersey.

In October of 2019, Grace appeared on TODAY, and also became an ambassador for Obagi Skincare’s Skinclusion line last fall, appearing alongside Priyanka Chopra Jonas, a former Bollywood actress now married to singer Nick Jonas. Grace was signed by Gamut Management, a talent agency that seeks to “rebrand[] the way people with disabilities are represented in pop culture.”

Gamut founder and CEO Mindy Scheier told the National Catholic Register in an email statement, “Grace has the ability to change the perception of people with disabilities in the public eye. She is a woman first — a person first, who has a platform to tell her story unapologetically. She has drive, ambition, and vision … her disability does not define her.”

Beyond individual speeches or photo shoots, though, Grace’s whole life communicates a message as well. As mom Linda noted, Grace has “taught us to see things differently: to see love and joy and kindness in people. I’ve learned courage, strength, and perseverance from her. She’s taught us unconditional love and what it means to forgive.”

Grace’s father Jeff added, “She is an example that anything is possible.”

Whether in her presentations at schools or through her modeling gigs, Grace has a message for the world: “No matter who you are, we all want the same things: to be valued, to be respected and to feel good about ourselves.”