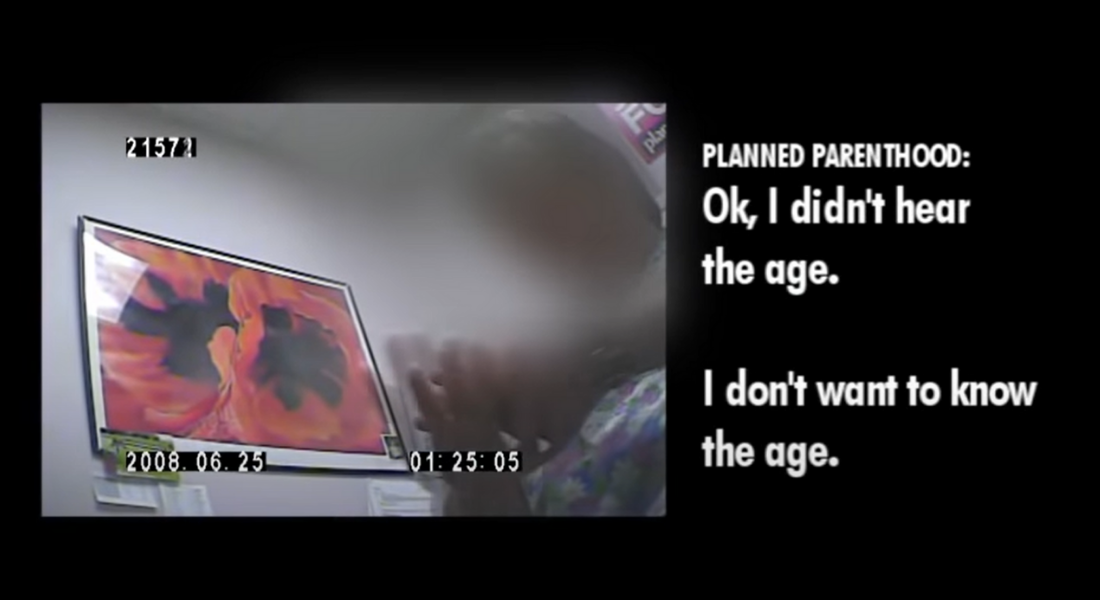 April is Sexual Assault Awareness Month, which is a campaign to raise awareness about sexual assault and sexual violence. Marches, events, and fundraisers are held in an effort to end sexual violence — and yet, one of the biggest contributors to this problem is yet to be held accountable. Planned Parenthood has a history of covering up the sexual abuse of children, with few — if any — repercussions.

Live Action’s very first investigation into this problem at the nation’s largest abortion corporation showed a systemic sexual abuse cover up at Planned Parenthood facilities across the country. Live Action founder and president Lila Rose visited eight facilities in six states, all of which were willing to hide the statutory rape of a minor child. The instance below took place in Bloomington, Indiana:

The Planned Parenthood staffer at the facility shown in the video above acknowledged that Indiana law requires her to report any instance of sexual intercourse involving children 13 or younger to police. Rose posed as a 13-year-old girl, and said her boyfriend was 31 — a clear case of sexual abuse. Though the nurse repeatedly told Rose of her responsibility to report the abuse, she assured her she would not. “Okay, I didn’t hear the age,” she said. “I don’t want to know the age.” Furthermore, the nurse coached Rose on how to cross state lines into Illinois so she could get around Indiana’s parental consent law, as well as what to say so her abuser would not get in trouble. “You’ve seen him around, you know he’s 14, he’s in your grade and whatever,” the nurse said. “You know what I mean.”

Police were not contacted, although Planned Parenthood claimed the nurse was fired after this incident.

In Indianapolis, Indiana, Rose again posed as a 13-year-old girl impregnated by her 31-year-old boyfriend. One staffer did mention that there were “laws we have to follow,” and that she would need to get parental consent. However, they assured her they would not ask any questions about her boyfriend or how old he was. “We don’t really care about who, what the age of the, the boyfriend,” the staffer said. “It’s your choice. It’s consensual.” Of course, most sexual abuse advocates understand that teenagers, particularly young teenagers, are not capable of truly giving consent to sex with adults. Such scenarios are abusive, which is why they are illegal. Yet the staffer merely said the older man should be helping her pay for the abortion.

Rose was then handed over to a Planned Parenthood counselor, who kept to the same line. “I don’t care how old he is,” she said. She then coached Rose on how to go across state lines to circumvent the parental consent law in Indiana, on how to cover up the abortion, and on how to protect her relationship with the older man. Authorities were not contacted, and the counselor later resigned.

In Tucson, Rose posed as a 15-year-old girl, and said her boyfriend was 27. Again, Planned Parenthood staffers did nothing to alert authorities. They helped instruct her on how to use the judicial bypass system to get around Arizona’s parental consent law, and told her not to bring her boyfriend to the hearing. They assured her that she wouldn’t have to say anything, and again did not inform the police of the suspected sexual abuse.

Two facilities in Phoenix, Arizona, were likewise found willing to cover up sexual abuse when Rose again posed as a 15-year-old girl with a 27-year-old “boyfriend.” Arizona law requires police be contacted immediately if relationships between an adult and a child are discovered. A staffer at the first facility assured Rose that it wouldn’t matter, even if he came into the facility and paid for the procedure, saying, “We don’t ask any questions.” The idea that an adult man engaging in statutory rape with a child and then bringing her in to have an abortion afterwards could possibly be coercive appeared to have never crossed the staffer’s mind — or she just didn’t care.

Rose was sent to the second facility to follow up for more counseling with another staffer, who told her that everything was “confidential” there, even though the relationship Rose was describing is illegal. The staffer also told Rose she wouldn’t tell her to stop or that she would report the abuse, saying, “I can’t say ‘Don’t,’ you know, or ‘I’m gonna go and do this.’ I cannot be that way, it’s not me.’”

The investigation in Memphis, Tennessee, found Rose posing as a 14-year-old, in a relationship with a 31-year-old man. Again, staffers reassured her they would not tell police, even though they acknowledged they should. “They’re gonna ask you, ‘You wanna have this done, this is your decision?’ and you’re gonna say, ‘Yes,'” the counselor said, referencing the judicial bypass process. “Just say you have a boyfriend, 17 years old, whatever.” The counselor told Rose that even though she should tell her manager and the abuse would be reported, she instead would just not tell anyone. This is against Tennessee law.

A Birmingham, Alabama facility, meanwhile, said they do “bend the rules a little bit” when Rose again posed as a 14-year-old pregnant by a 31-year-old. When the counselor found out about the age differences, she said that they would never give the information to anyone. “As long as you consented to having sex with him, there’s nothing we can truly do about that,” the counselor said. Alabama law requires information involving sexual abuse to be reported immediately. The counselor also told Rose how to get around the state parental consent law.

Rose posed again as a 14-year-old, this time in Milwaukee, Wisconsin, claiming she was in a relationship with a 31-year-old man. Again ignoring the potential for coercion, the counselor acknowledged that the older man would be paying for the abortion, and didn’t seem to care. She also helped coach her on how to keep the relationship a secret, in violation of Wisconsin law. “You don’t have to say anything [about the rape],” the counselor said. “Just give them the information that’s needed.”

Finally, in Lousiville, Kentucky, Rose visited EMW Women’s Surgical Center, telling staff she was 14 years old, and that her “boyfriend” was 31. They specifically recommended an attorney for Rose to contact to get around Kentucky’s parental consent law, and did not contact police, despite confirming the age difference between Rose and her “boyfriend,” and verifying that he knew she was underage as well. They also assured her they would help her get birth control, so she could continue in her abusive relationship without worrying about getting pregnant again.

While Live Action’s investigation was disturbing enough, this is sadly just the tip of the iceberg. There are numerous real-world circumstances of Planned Parenthood and other abortion facilities committing abortions on young girls, and looking the other way regarding the abuse they suffered.

Planned Parenthood is known to cover up statutory rape and abuse of children, and it’s long past time that it is held accountable for this unethical and illegal behavior.