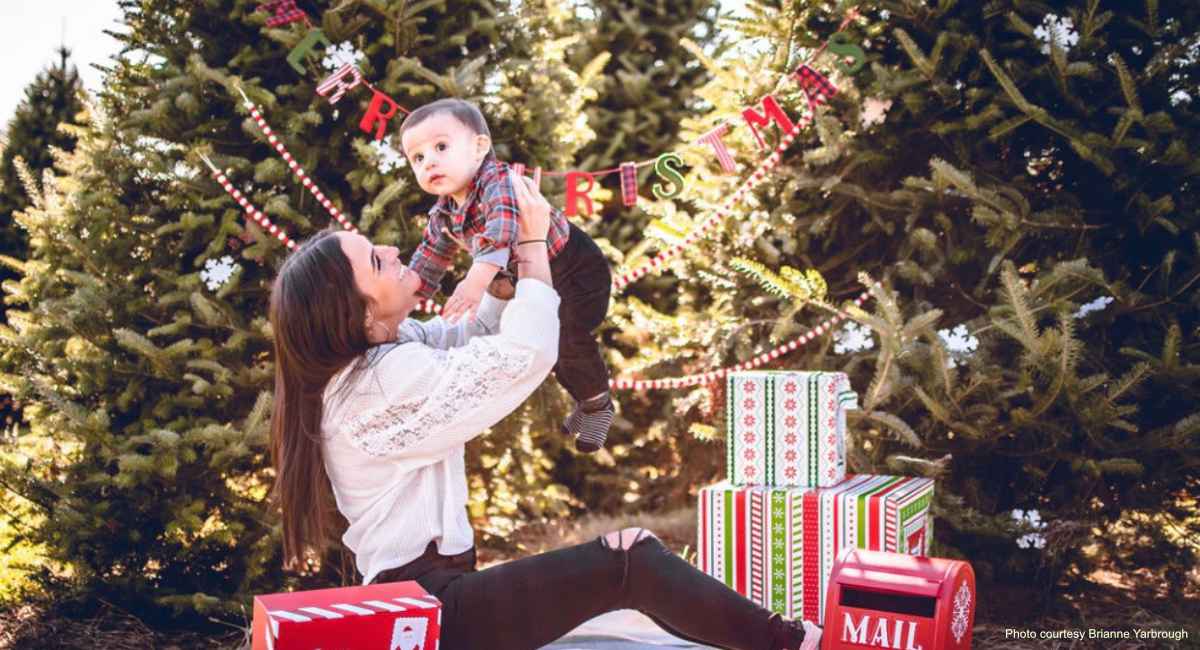 In 2019, Brianne Yarbrough was excited to start a new chapter in her life since graduating high school the previous year. The 19-year-old had recently enrolled in college with plans to study nursing. But an unexpected pregnancy and unsettling prenatal diagnosis threw the young woman’s life into a tailspin.

As the reality of impending motherhood took hold, Brianne grappled with a myriad of emotions: embarrassment, trepidation, and uncertainty. She was no longer in a relationship with the baby’s father, yet there was a conviction in her heart that she could not ignore – that she was meant to parent this baby. Empowered by the outpouring of love and encouragement from family and friends, she felt confident she would overcome the demands of parenthood.

It was this support that truly counted. She said, “… I felt like I was on shaky ground, wondering how I was going to make it as a young, single mother,” she told Live Action News. “Fortunately, my parents and sisters stepped up and gave me the reassurance I desperately needed and that made a difference in my outlook.”

Brianne was willing to accept that her life would be forever changed and that she would miss out on the freedom and spontaneity associated with unencumbered young adulthood. She worried about finding a partner someday who would accept her baby as his own. But she was completely blindsided by the enormous challenges she would encounter well before her baby’s birth.

While the first trimester of her pregnancy progressed as expected, it was at 21 weeks during a routine ultrasound that revealed her developing baby, a boy, had fluid in his abdomen. Brianne was immediately referred to Akron Children’s Hospital where additional tests uncovered more fluid — around his heart and behind his lungs. Diagnosed as a condition called hydrops, doctors cautioned Brianne that increasing fluid around the cardiac sac could lead to heart failure. The prognosis was grave – doctors said her son would likely die in utero. 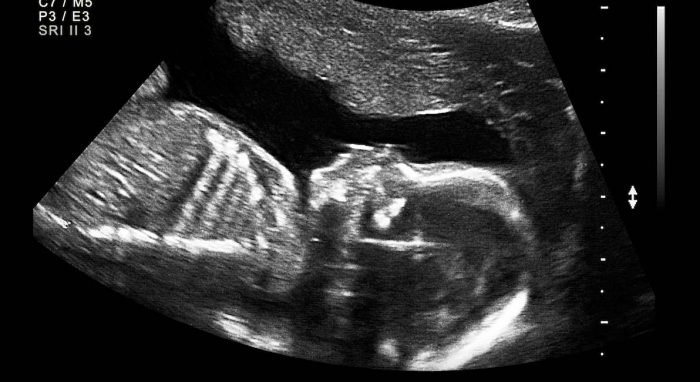 (Stock Image) Level 2 Ultrasound is also known as the Fetal Anatomy Survey or Fetal Anomaly Screen and is usually done between 18-22 weeks.

“I felt as if my heart had broken into a million pieces and I was gasping for air,” Brianne told Live Action News. “I’ve never been so distraught or felt so helpless.”

But then one night, she suddenly felt peace. And amid that glimmer of hope she felt the reassurance of God’s grace and mercy. “It was in that moment, that although I didn’t know what lay ahead, I just knew everything was going to be okay,” she said.

READ: Mom recalls pressure to abort baby with Down syndrome: ‘He has no chance of surviving’

Since hydrops could be associated with certain genetic defects, Brianne was referred to a genetic counselor. Genetic material from Brianne and the baby’s father was extracted and studied for possible causes of the hydrops. Tests revealed the CMV virus most likely spurred the onset of hydrops. And then, Brianne received concerning news: in the unlikely event that her baby reached full-term, he would likely suffer heart defects and, possibly, deafness.

Given the severity of the baby’s potential medical problems, doctors advised Brianne to abort her son.

Brianne felt like she been sucker punched. Yes, the devastating report shattered her hope she’d get better news but undergoing a procedure to end the life of her preborn child was certainly not an option. “Abortion is abhorrent to me and to even suggest it was very offensive and made me angry,” she said. “I was fighting so my baby could live, so why would I ever consider ending his life?”

Though her apprehension was growing, “I wasn’t going to let doubt take root,” she recalled. “I kept telling myself: I’ve got to be strong for my baby, I’ve got to give him a chance.” Fortunately, she wasn’t fighting the battle alone. She had on her side “prayer warriors” – her two beloved grandmas – who prayed continuously, never wavering in their belief her baby would survive.

More determined than ever, Brianne sought treatment for high-risk pregnancies at the Cleveland Clinic. The initial visit revealed a promising development – just a small amount of fluid was visible around the baby’s heart and lungs, although some was noted under his skin. Over several weeks, Brianne underwent amniocentesis, an MRI, and a fetal echo to check for the CMV virus, heart defects, structural bladder problems, bowel perforations or possibly a lymphatic cause. Doctors inserted a needle in Brianne’s womb every four weeks, drawing close to 12 ounces of fluid from the baby’s abdomen.

During this time, Brianne was contacted by Thomas Jefferson University in Philadelphia to participate in a hydrops study involving genetic testing. She wondered if this could be her answer to prayer. “It was exciting to be involved in this study,” she recalled. “I had always felt the right solution was out there somewhere and that I was going to find it. Things were finally starting to look up.”

But to her disappointment, none of tests produced definitive answers, except to find that the CMV virus was not the cause of hydrops as initially thought. And, strangely, the fluid in the baby’s abdomen seemed to be decreasing. Doctors were baffled; hydrops was usually a progressive condition. Despite the positive turn, Brianne was cautioned that she still had a high risk of a stillborn birth or pre-term delivery. The baby’s fluid levels would need to be closely watched, which meant an exhausting two-hour-trip to and from Cleveland every Friday.

But, finally, a tether of hope she could hold onto: if she could just get to 34 weeks, doctors felt the baby might have a fair chance. “There was no question I’d do whatever was needed to bring my son into the world healthy,” she said.

For the next few months, Brianne struggled to keep her increasing anxiety in check; making numerous trips with her mom to the ER whenever she couldn’t detect the baby’s movements – only to find her baby was fine. Much to her relief, Brianne reached the 34th week of her pregnancy without complications and her doctors determined it was safe to wait another 3 weeks to induce labor.

Soon the day to deliver finally arrived, and with her two sisters by her side, Brianne joyfully welcomed her son, Greylen James, who greeted his tearful mama with a hearty cry. Greylen was carefully monitored for two weeks in the Cleveland Clinic NICU — but doctors found no disease or any health defects. Although he still had a tiny amount of fluid in his abdomen, doctors told Brianne that Greylen was an otherwise perfectly healthy baby and should suffer no adverse health effects long-term.

According to Brianne, “Greylen is a miracle. There is no other explanation. None of the doctors could explain why he was born healthy. But I always knew in my heart God had a hand in healing my son.”

READ: Parents refuse to abort son with Down syndrome and heart defect: ‘Jacob has amazed us’

Brianne’s mother, however, was never as sure that her grandson would survive the womb. She recalls, “I guess I was a doubting Thomas. I didn’t even want to put up the crib or prepare for the baby’s arrival. I heard the grim medical reports and I kept thinking that Brianne was in denial about the severity of the situation, but I was careful not to convey my qualms to her. This is one time I’m incredibly happy I was wrong.”

Today, the young mother is thankful for her blessings. Her life is filled with picking up toys, changing diapers, and chasing after a very energetic (and adorable) 16-month-old toddler. In addition to that, she works part-time and is taking classes toward her LPN degree. She credits the love and support of her family, especially her mother and most importantly, prayer for sustaining her during a difficult journey.

Through her experience, Brianne learned the value of remaining strong and holding fast to faith. She believes support from friends and family are key to navigating difficulties well and urges women to cultivate a supportive group of caring people.

“Never give up,” she advises. “Stay true to your convictions and keep the faith that things will eventually get better. Never stop believing you’ll get through life’s difficulties.”