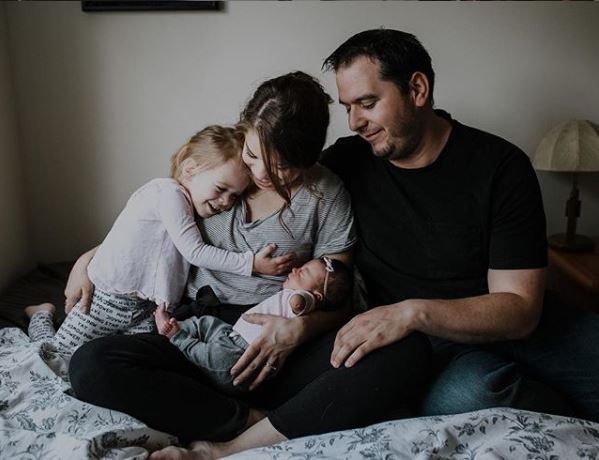 At 19 weeks gestation, Vanessa McLeod learned that there was something not right with her preborn daughter. Terrified the doctors would tell her that her baby was going to die, she was relieved to learn that her daughter was missing her arms and hands but was otherwise healthy. However, the doctors suggested that she and her husband abort their daughter, and McLeod began to feel guilty for wanting to keep her baby.

“My ultimate fear […] was losing her,” said McLeod in an essay for Love What Matters. “I was worried that the pregnancy wasn’t viable. That there was something she wouldn’t be able to survive. That I would give birth and lose her days, hours, or minutes after meeting her.”

With her husband away for work, McLeod sat with her parents and midwife listening to what the scans had revealed about her daughter. There were the possibilities of a cleft lip and a heart problem, and one femur was curved and shorter than the other. All news that left McLeod with hope. But then came the news that her baby girl was missing both forearms and hands.

“This felt like a punch to the gut. It stole my breath,” she recalled. “It keeled me over and the sobs tore out of me, and visions of my perfect little baby shattered. No hands? I had never heard of this. It wasn’t on my radar. It had never crossed my mind, never been a fleeting fear or worry. […] I was devastated. I didn’t know if this was something I could handle, I didn’t know if things would be okay.”

But in the pain of that moment, her father spoke words of comfort: “She is going to be a blessing to our family.”

After her husband returned home, they went to meet with perinatologists, medical geneticists, and genetic counselors. They assumed that meant they would be getting answers to their questions and concerns, but unfortunately these meetings often create more questions and lack compassion. That’s how it went for McLeod.

READ: Pressured to abort, a second opinion caused these parents to choose life

“I thought that meant we were getting answers that day – that the doctors could tell me why this happened, what caused it, and what the next step was,” she said. “But the appointments were severely disappointing in that regard, and if anything, the doctors created more questions for us than answers, and tainted that whole experience with such negativity. I wish with all my heart that appointment had gone differently. That someone had told us it would be okay, that someone had told us how beautiful and perfect our little girl would be, that she would smile and giggle and live a life filled with so much love.”

But instead, said McLeod, they received “news of doom” and “all hope was taken away.”

I could stare at this little face all day long 💕 📷 @chelseaellisphotography

McLeod was shocked when the doctors suggested that they have an abortion. It was something that hadn’t crossed her mind even once throughout the entire experience. And even when she and her husband said they didn’t want to abort, the medical geneticists replied, “But think about her quality of life. She’s going to have no hands.”

It was cruel and it was manipulation. The geneticist even dismissed McLeod’s suggestions of prosthetics or alternative solutions. When medical professionals guilt parents into aborting their children, it can lead to a lifetime of mental health struggles for parents. Post-abortion trauma and regret can cause parents to abuse alcohol or drugs. It can also increase the risk of depression and suicide and make it difficult for parents to bond with their other children.

In addition, suggesting abortion because a baby has a disability — while claiming that she will have a poor quality of life — is ignorant, discriminatory, and an example of modern-day eugenics. No doctor can predict the quality of a person’s life and it is certainly not dependent on whether or not a person has arms. McLeod’s hope faded even more as the doctors made her feel guilty for not wanting to abort her baby and had made her doubt her own abilities as a mother despite the fact that she had a toddler at home.

“But as we had a moment of privacy, I remember looking at my husband, having so many questions and no answers,” she said. “But he so firmly, passionately, and emphatically said to me, ‘I’ll do whatever I have to do to take care of her. I’ll build her anything. I want her. I’ll do whatever it takes. I’ll take care of her for the rest of her life.’ And I knew in that moment, he was right. She was ours to love and protect, and we did already love her. And I knew, without a doubt, that with my husband by my side, we could do this.”

Sometimes she drives me crazy by telling me the same thing 500 million times in a row, but this girl is the sweetest and has such a soft heart. I LOVE that she gets to shower a little sister with her very special love.

The couple declined the amniocentesis because of the risk of miscarriage and moved forward with the pregnancy with hope. Born four weeks early, little Ivy is thriving. She has met all of her milestones and her giggle is “magical.” McLeod wishes she could show video of Ivy to the doctor who told them to abort her. She no longer worries about Ivy’s quality of life and has a lot of hope for her future.

“All I know is that, at the end of the day, this story isn’t about me,” said McLeod. “It’s all about her. And she is absolutely, unequivocally, undeniably perfect.”