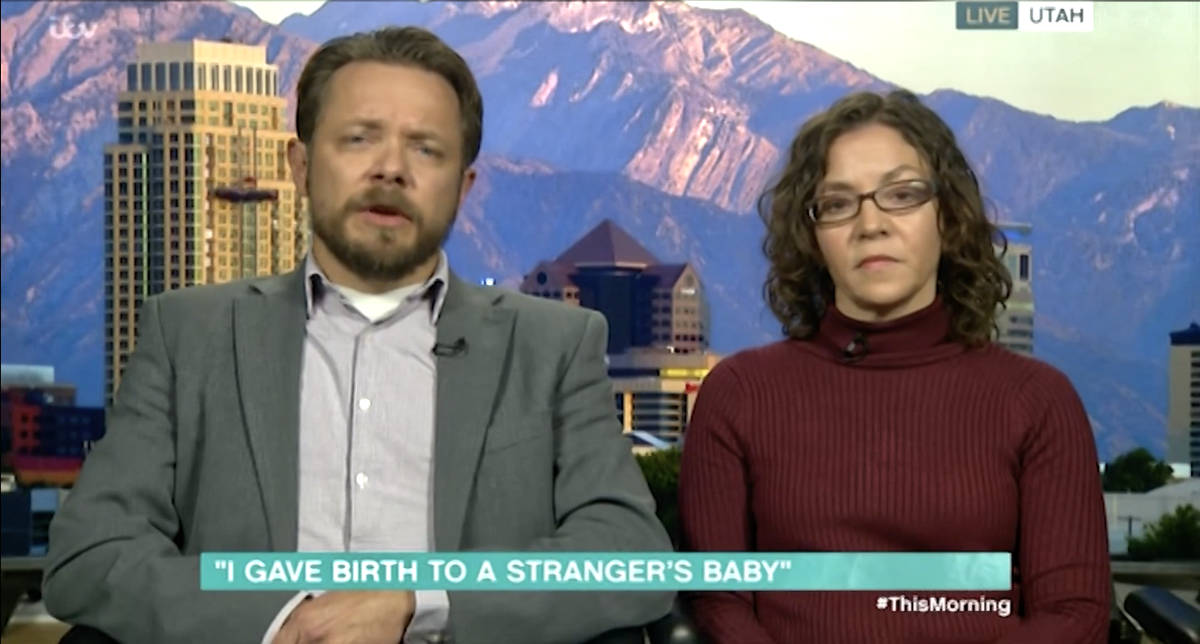 In 2019, a couple decided to order DNA kits as a fun family activity with their two sons. However, their 23andMe results shockingly revealed that one of their sons was not biologically related to his father. The couple had undergone IVF in 2007 and it appeared that another man’s sperm had been used.

According to TODAY Parents, Donna and Vanner Johnson used IVF after having their first son because Vanner had undergone three hernia surgeries that damaged his vas deferens, making it impossible for him to conceive children naturally. That’s when the couple turned to IVF at the University of Utah Center for Reproductive Medicine to have a second child. After their second son Tim was born, they never imagined he was the son of another man.

“My husband called and said, ‘Hey, I got my results back,” Donna told TODAY Parents. “But he said there was something off.” Listed as their youngest son’s mother was Donna but listed under his father was the word “unknown.” In addition, he had a list of relatives that didn’t match the family. They assumed a mistake had been made by 23andMe, but after further examination, Donna realized that the mistake had happened years earlier.

“I looked at my son’s results and it said that he had a half-brother through me, and it all came crashing down,” said Donna. “I knew something was wrong.” She recalled that when they were at the IVF clinic years earlier they were told a “carrier” would be bringing Vanner’s sperm to the lab. They concluded that another man’s sperm had been mixed up with Vanner’s.

“We were so shocked, and honestly didn’t know what to do,” said Donna. “We just keep thinking, ‘What is happening to our family? Is our son legally our son? We didn’t know for sure, and we were worried.”

The first thing they decided to do was to tell their son Tim that Vanner was not his father — not biologically. Vanner took him for a ride to get ice cream. Tim already knew he was created using IVF, so Vanner told him that there was “some kind of mix up” and that he was not Tim’s biological father. He asked Tim how he felt.

“Right away, one of the things he said was, ‘The only thing I wish is that I knew what I would look like with your genes,'” said Vanner. “And he said that whatever happens, I’m still his dad. And I said, ‘Yeah, I am. I will always be your dad.'”

Eventually, the couple told their older son, who said, “It doesn’t matter, he’s still my brother.” After that, the family became researchers, digging for information that would lead them to Tim’s biological father. Their “sleuthing” lead them to Devin and Kelly McNeil, who have three children ages 6, 8, and 13. The Johnsons contacted the couple and shared their story. Devin agreed to take a DNA test.

“It showed Devin’s family members and his line: his grandma, his sister, his nieces and nephews, all showing up in Tim’s line,” Kelly told TODAY. “It was hard to argue with those results.”

Devin and Kelly told their children how IVF worked and that their oldest child had been conceived that way. They then explained that “the doctors had accidentally used dad’s sperm with another woman’s eggs, a baby was made, and that we just found out that they have a half brother.” All of the children were shocked but wanted to know more about their brother — as any siblings would.

“My 8-year-old said something pretty profound at the end,” Kelly said. “He said, ‘I heard on a show once that life doesn’t always give you the gifts that you want, but the true gift is life itself.’ […] I remember thinking we needed to write that down, because our child just taught us all a lesson.”

The families meet at parks and plan to be friends. The McNeils say they will be as involved in Tim’s life as he wants. But both families believe the fertility industry needs more regulations in place.

“This was still a horrible mistake and something that shouldn’t have happened,” said Kelly. “Even one case is too many cases.”

Donna said she and Vanner love Tim for exactly who he is. “Obviously we wouldn’t want our son any different — he is who he is and we love him. Every bit of him. So there is that gratitude,” she said. “But there is that frustration, that disappointment. No one should have to face this because of a lab mistake.”

Tim’s life isn’t the only one to have been disrupted by mistakes in the fertility industry. Two couples recently learned they gave birth to each other’s baby girls in an IVF mixup, and attorney Melissa Brisman said she receives calls about IVF mistakes every week. Those cases include fraud, data entry errors, and accidental multiple embryo transfers. Every one of these “mixups” affects living human beings.

“[…] #BigFertility routinely implants someone else’s biological children into an intended mother or surrogate via donor sperm, egg, or embryos,” said Katie Breckenridge of the organization Them Before Us. “When adults choose to separate a child from their biological parents at conception, we shower those adults with congratulations and often call it “progress.” Only when it’s a case of an IVF mix up is it a problem that babies go home with genetic strangers. In other words, biology matters only when adults want it to matter.”

Tim’s biological father and his wife have said that Tim isn’t their son, but is an extension of their family. “Tim is loved and taken care of and has a good home and great parents,” said Kelly. “We don’t want to take that away.”

The families are likely doing the best they can to cope, but the fertility industry profits from creating (and destroying) innocent human lives without rules or regulation. The ones who suffer most are the children. Hopefully, with the love of his parents and newfound extended family, Tim will know that regardless of any “mix-up” surrounding his conception, he is a valuable human being.