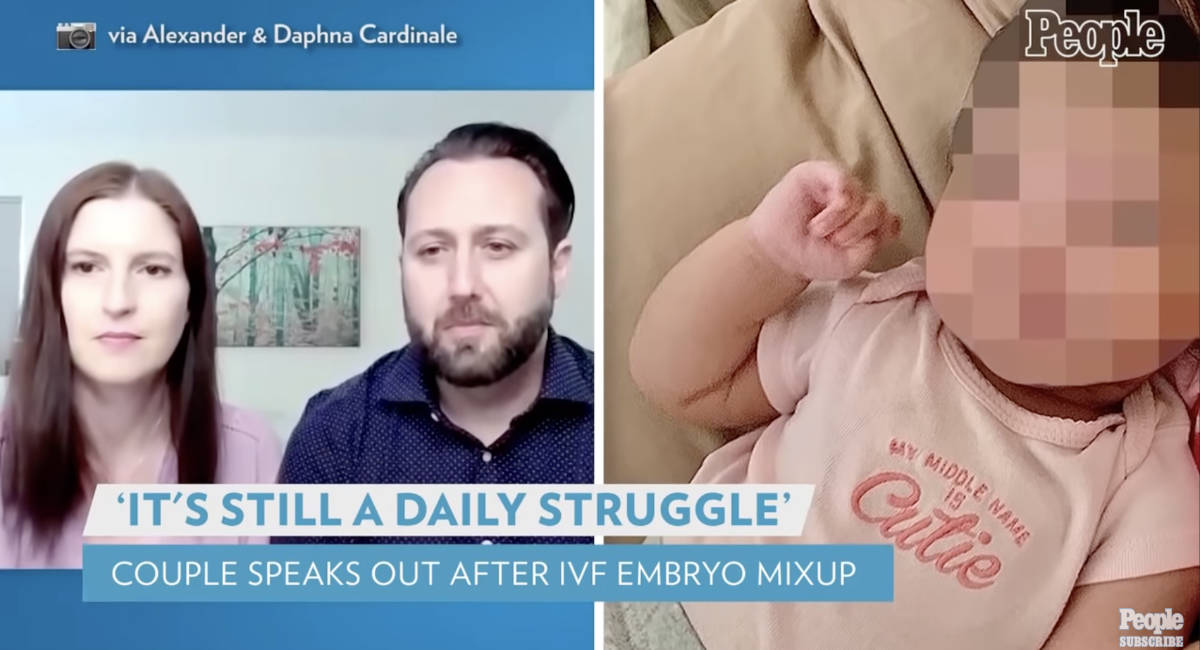 A California couple has filed a lawsuit, and another couple is preparing to sue, after their embryos were swapped in an IVF mixup, causing each couple to give birth to the other’s child.

According to People, after giving birth to her second daughter, Daphna Cardinale and her husband Alexander suspected that the baby wasn’t genetically related to them because she has a darker complexion than they do. However, they buried those concerns because they loved the baby girl and trusted the doctors who had handled their IVF process.

“It was a little jarring, but I shook it off and cut the umbilical cord,” said Alexander.

“If we hadn’t done IVF, I would’ve just chalked it up to genetics,” he added. “She just looks how she looks. No big deal. But because we’d done IVF, my brain started going to the dark place.”

Daphna felt the same. “She looked really different than us,” she said. “But she felt so familiar to me because I carried her and I birthed her.” She said the baby “just really folded into our lives and into our hearts.”

Yet, a month later, an employee from the California Centre for Reproductive Health (CCRH) called and asked the couple for a photo of the baby, and the couple wondered what the clinic knew that they didn’t. A week later, Daphna bought a home DNA test kit, and weeks later, the results showed that the baby girl was not biologically their child.

“We got an email that basically said that she was genetically related to neither of us,” said Alexander. “That’s when our world started falling apart.” The couple was scared of losing the baby they loved and were also afraid that their own biological child had been born to another couple and was out in the world somewhere. Further DNA testing revealed that their own daughter had been born to another couple just a week apart from the baby Daphna had birthed.

“I was overwhelmed by feelings of fear, betrayal, anger and heartbreak,” Daphna said during a news conference announcing the lawsuit against CCRH and its owner, Dr. Eliran Mor. “I was robbed of the ability to carry my own child. I never had the opportunity to grow and bond with her during pregnancy, to feel her kick.”

The couple is suing for breach of contract, negligence, and fraud and is seeking damages.

According to the lawsuit, “The Cardinales, including their young daughter, fell in love with this child, and were terrified she would be taken away from them.”

The other couple wishes to remain anonymous but is planning to file a similar lawsuit with the help of the same attorney the Cardinales are using — Adam Wolf, who specializes in fertility cases.

The babies were switched back in January 2020, and the families, who live ten minutes apart, are staying in touch to “forge a larger family.” Daphna explained how difficult it was to tell her older daughter that the baby they had taken care of and loved for three months was not her sister. The young girl begged her parents not to switch the babies. Both couples took turns carrying for the babies as they transitioned to a permanent switch.

“They were just as much in love with our biological daughter as we were with theirs,” Alexander Cardinale explained.

Wolf said that the mixup “highlights an industry in desperate need of federal regulation.” It also highlights the desire for bonding with one’s child during pregnancy, and the rights of the child to his or her biological parents. One could argue that an “industry” built on the creation of babies should never have been allowed to exist at all.