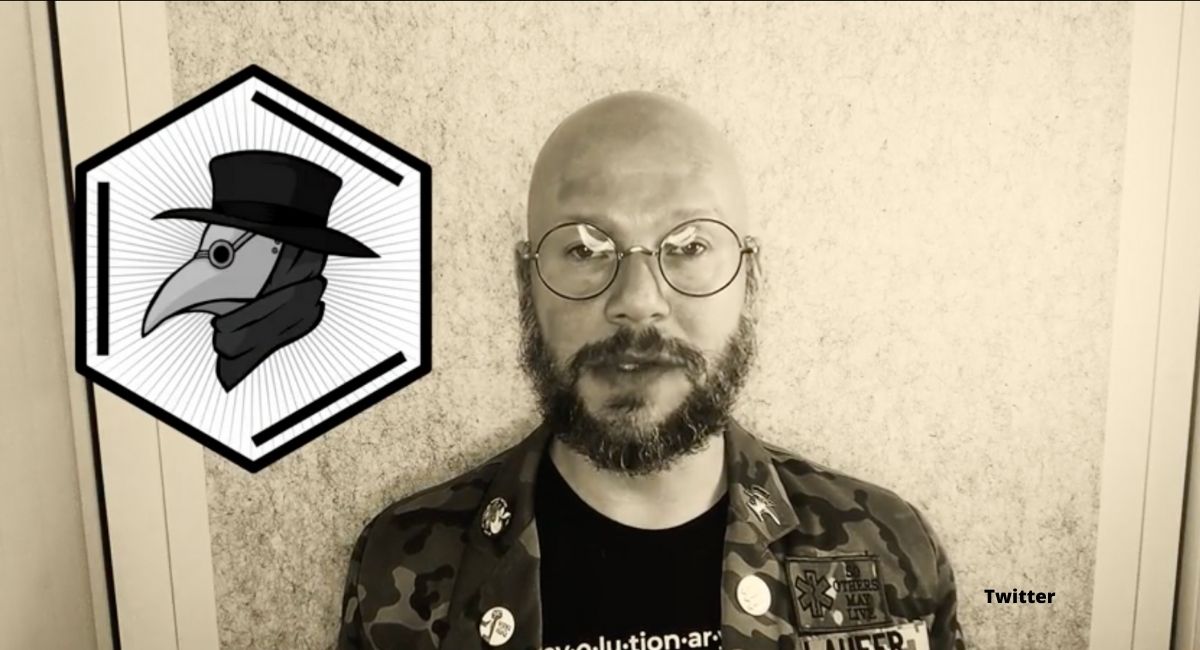 An online video, which offers a potentially dangerous DIY abortion pill recipe, has been uploaded by a group calling itself, Four Thieves Vinegar Collective (FTVDIYA). The Chief spokesperson of the group, Mixæl S Laufer, can be seen in the video instructing women on how to manufacture their own abortion drugs. While Laufer only recently shared the video on Twitter it seems to have been in circulation on the Internet Archive website since September of 2021 and appears to have been viewed more than 24,000 times.

Currently, the abortion pill regimen consists of two drugs: Mifeprex (mifepristone) and misoprostol. Mifeprex was approved by the FDA for the termination of pregnancy in 2000 in a regimen with a second drug, misoprostol. That drug was originally created under the name Cytotec as an ulcer medicine. According to the maker of the drug (Searle), it was never indicated for pregnancy/abortion when it was later paired with mifepristone (formerly called RU-486) as part of the abortion pill regimen. Despite that, abortion advocates have been busy inventing all sorts of schemes to flout the law and obtain or expand abortion pill access, including promoting the use of “Miso only,” which is far less effective in completing the abortion than the two-drug combination.

In his video, Laufer referred to abortion pills as a “key resource” which he claimed was a “human right.” And, he added that while people are working to reverse abortion restrictions in places like Texas, he said there were “intermediate steps that need to be taken.”

To make DIY abortion pills, Laufer lays out the ingredients for his concocted recipe, telling his viewers they will need “Misoprostol powder,” a “scale,” a “pollen press,” some “confectioners’ sugar,” some “corn starch or powdered milk,” and a “spray bottle.”

Laufer claimed the DIY pill-making process was easy and “not that tricky.” He went on to instruct viewers on how to obtain the active ingredient, misoprostol, even going as far as to suggest the Black market — which may send a counterfeit drug.

READ: Woman who took abortion pill: I was ‘weeping and screaming’ because I saw my baby

He then went on to say, “Interestingly enough, most domesticated horses have ulcers” and tells viewers they can obtain the drug from a veterinarian. “In any event, you can get misoprostol for horses” or — as he claimed — from websites that our “out there” as “misprostol powder” which horse owners use.

As for obtaining mifepristone, Laufer claims that “a raw active ingredient is much harder to find because it’s not the sort of thing that’s used for other stuff,” he said.  “If you’re looking to make it from scratch there are some places – again – these sort of chemical supplier types that come from places that are kind of questionable and its not real clear whether they are going to give you the real thing or they are going to give you something that’s counterfeit. But you can order them,” Laufer claimed.

Not hypothetical at all. Go forth and rock it.

Laufer recognized his video could be taken down so he claims that he embedded a QRC code inside for people to locate the video again should that happen.

Live Action News will not be publishing his complete instructions.

“The Four Thieves Vinegar Collective first demonstrated how to make misoprostol tablets, which are used to induce an abortion, at the Please Try This at Home conference in Pittsburgh in 2019,” Vice News claimed.

“The video is likely to help at least some people seeking abortions,” Vice News wrote in part, “though Laufer says that, in an emergency, people should seek out help from established health organizations that have for years been seeking to expand abortion access.”.

The Vice article appeared critical of Laufer’s reference to misoprostol for horses as a possible ingredient, writing, “This is reminiscent of ivermectin, which is used to control parasites in horses but also became a favored—but ineffective—COVID treatment among conspiracy theorists. Ivermectin’s use in horses made it easier for humans to get without a prescription,” the Vice News article noted.

“Motherboard cannot speak to the safety of making your own pills, and the Four Thieves Vinegar Collective has been criticized by some in the pharmaceutical and medical establishment who think that making DIY medicine isn’t safe under any circumstances,” they added.

What could be FDA’s response:

Laufer, who uses the prefix “Dr.” on his Twitter account, describes himself as “a work-study anarchist with high hopes of growing my career to professional.” A 2017 article in Scientific American (SA) claimed Laufer had been teaching math at Menlo College adding, “When he’s among the biohacker crowd, he spells his name ‘Mixæl,’ mashing up the Euro-variant for ‘ae’ and a Coptic ‘x,’ pronounced ‘ck.’” A separate article claimed Laufer “holds a Ph.D. in mathematics from City University of New York and is not a medical doctor.” 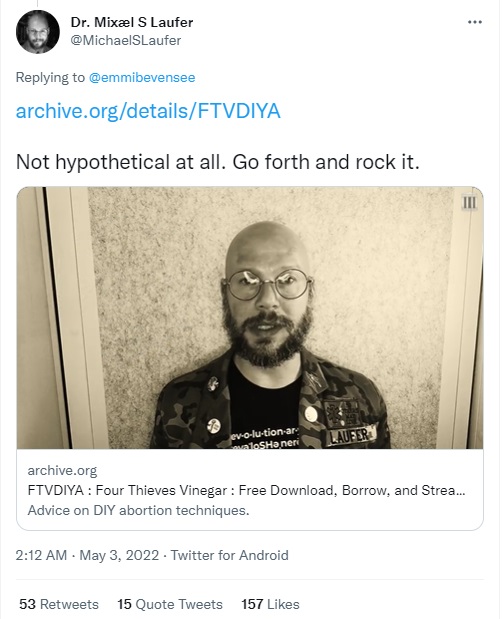 “Four Thieves found inspiration and its logo from a bubonic plague episode in the Middle Ages. As Laufer tells the possibly apocryphal tale, thieves who made a habit of looting plague-ridden areas protected themselves from infection by using masks containing vinegar and herbs with antimicrobial properties. Eventually, they were captured, then freed after agreeing to reveal their formula — which was made public, saving many lives,” SA claimed.

While abortion advocates, many of whom have decried the dangers of illegal abortion, may have no problem directing women or teens to random men like Laufer, one would hope that the FDA would step in. But according to the previously mentioned SA article, regulators at the FDA did not seem interested in Laufer or his DIY recipes.

SA reached out to Patricia J. Zettler, a law professor at Georgia State University and a former FDA attorney, who told SA, “There is no product,” she said, “and FDA doesn’t regulate what people say about a drug.” And, Vice.com claimed in a separate piece, “Since Four Thieves isn’t actually selling or distributing the medicines made by its members, what they’re doing isn’t technically illegal in the eyes of the FDA, even though the agency has issued a public warning about the collective’s DIY methods.”