Well before the 1973 Roe v. Wade Supreme Court decision sanctioned abortion in all 50 states, there was diversity within the pro-life movement, which included feminists, people of color, and a variety of leaders from notable professions and nearly every religious faith. Early abolitionists opposed abortion, and later motivated others to resist the pressure of second wave feminists to accept abortion after pro-abortion men hijacked the cause.

As early as the 1960s, notable Black leaders and clergy warned that abortion and “family planning” would be used as a means of “Black genocide.” A Black Catholic Priest, Father George Clements, told Jet Magazine in 1973, “I believe the entire question of abortions is just one more in the continuous series of events to eliminate the Black population.” Also in 1973, the Progressive National Baptist Convention denounced abortion, as documented by Jet Magazine below: 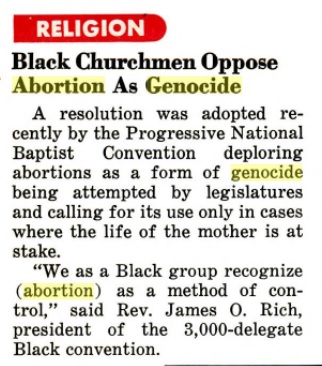 Even the Rev. Jesse Jackson, a known civil rights leader of his day, called abortion “genocide” and later joined with anti-abortion organizations to endorse a Constitutional amendment banning abortion. In 1975, Jackson and Protestant leaders like Billy Graham issued a joint statement, claiming, “A deep concern for defenseless human life, including the unborn…is a constant element of Christian moral teaching from the days of the Apostles onward.”

Sadly, in the mid 1980s, Jackson changed his position and became pro-abortion.

Author Daniel Williams documents contributions of Black leaders in the pro-life movement, including “an African American Methodist physician who had been the first black woman to graduate from Harvard Medical School” — Dr. Mildred Jefferson. When she died in 2010, the New York Times noted, “Dr. Jefferson had served three terms, from 1975 to 1978, as president of the National Right to Life Committee… one of the founders of the committee in the early 1970s. Besides also serving as director of Massachusetts Citizens for Life, Dr. Jefferson was a founding member of the board and a past president of the Value of Life Committee of Massachusetts and was active in Black Americans for Life.”

In 1976, Dr. Jefferson referred to abortion as “class war against the poor” and warned abortion would target the Black community. In 1977, she stated, “Blacks suffer more from abortion because what looks like help is actually striking against them. Blacks are fewer. They will disappear sooner….”

It is well documented that the leadership of  the Catholic Church has been outspoken in opposing abortion. In 1973, Bishops issued a statement of warning to congregants, saying, “Those who obtain an abortion… persuade others… and those who perform the abortion procedure are guilty of breaking God’s law…” [and] “place themselves in a state of excommunication.”

In the late 1960s and early 1970s, many mainstream religious groups were outspoken in the battle for the right to life.  In 1971, the Lutheran Church Missouri Synod condemned abortion, claiming, “no person has the right to extinguish human life…” By 1973, the West Ohio conference of the Methodist Church supported a Constitutional amendment for the “right to life of an unborn fetus…” Then by 1976, thousands of Protestants and Catholics opposed abortion at the First Covenant Church in Minneapolis, MN. 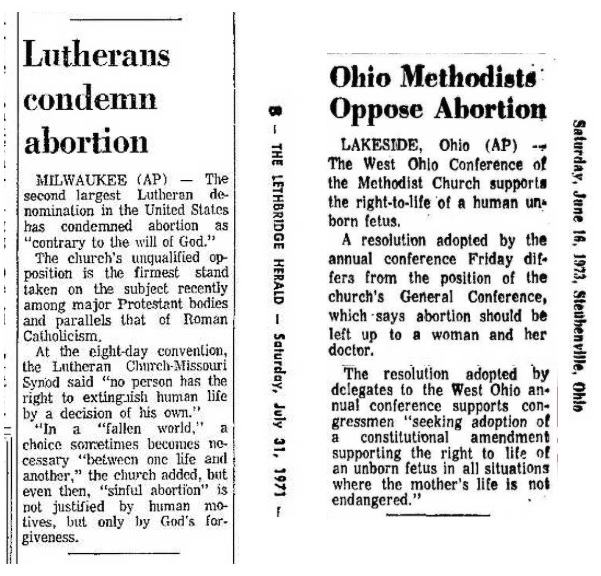 Like today, the media repeatedly painted the pro-life movement as mainly Catholic, which led many to write letters to the editor to correct the error. A 1975 letter (below), entitled “Uninformed” states in part, “The National Right to Life movement includes many prominent Protestant clergymen, rabbis, physicians, and yes, even feminists who simply refuse to accept the Supreme Court’s monstrous declaration that social convenience and the ‘discomforts of pregnancy’ are more important than an unborn child’s right to life….” 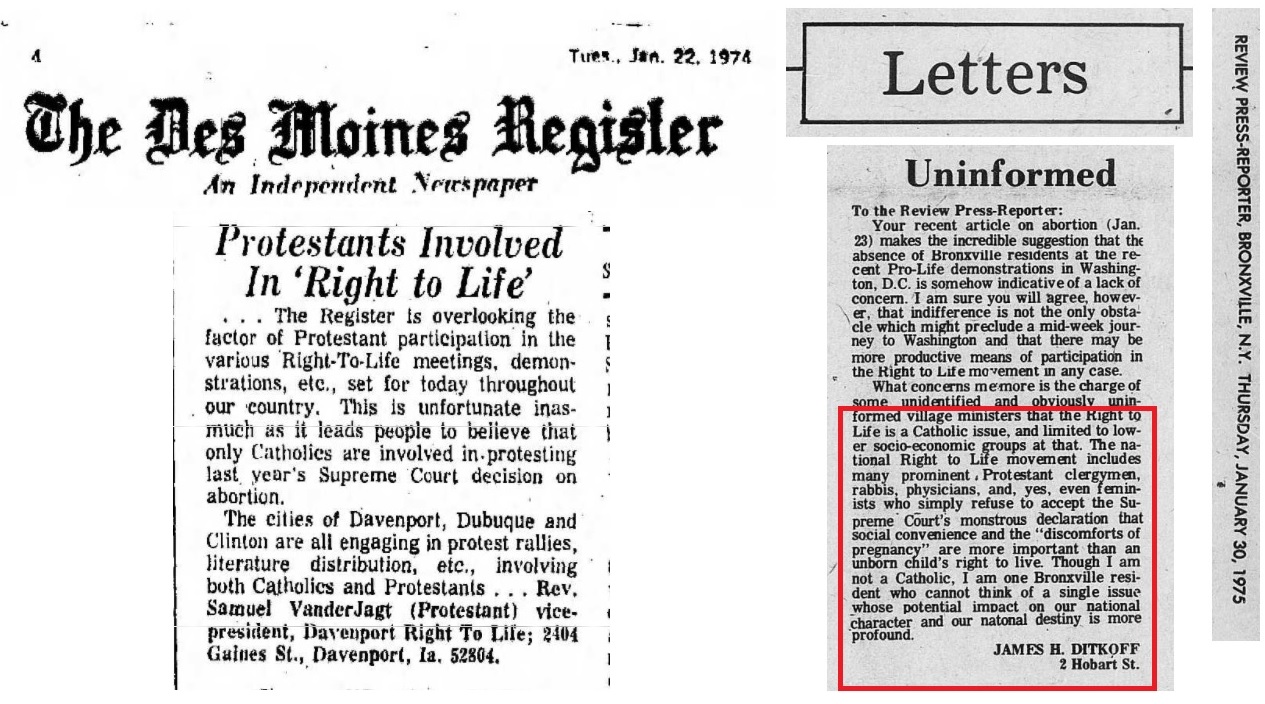 In 1974, syndicated columnist Nick Thimmesch reiterated this, writing, “[M]any right to lifers are Catholics, but the organization includes Protestants and some Jews.” He also mentioned a pro-life leader who was a member of the Latter Day Saints.

Robert Cetrulo, founder of Northern Kentucky Right to Life (1971), sent a scathing letter to editors at the Cincinnati Post and Cincinnati Enquirer in 1977 claiming they did not “report that many other churches and organized religions, including the Lutheran-Church Missouri Synod, the Mormon Church, Orthodox Judaism and thousands upon thousands of other Christians and Jews, oppose abortion.” He attempted to disprove claims that those supporting a Human Life Amendment to the Constitution were “unnamed.”

Cetrulo noted the religious diversity of the pro-life movement and pointed to pro-life leaders from a broad religious spectrum, including Episcopal Church member Carolyn Gerster, a Black Methodist physician, Rev. Jesse Jackson, and “Baptists for Life.”

According to Cetrulo, a document from pro-life leaders, “A Cause for Concern,” was signed by prominent faith leaders of that day which included law professors, Lutheran pastors, Jewish rabbis, Mormon leaders, evangelical and Congregationalist professors of theology, a Harvard professor of Divinity, and others. It expressed “the historic Protestant tradition of anti-abortion philosophy” and a concern with the “misleading and divisive attempts of pro-abortion groups to fragment the common witness of all Christian confession to the right of all preborn children to protection.”

Historian Daniel Williams also documented the diversity of the pro-life movement in his book, Defenders of the Unborn. In 2016, Williams recapped the diversity in a Time piece where he wrote:

The media portrayed the pro-life movement as a Catholic cause, but by 1972, that stereotype was already outdated. In Michigan, for instance, the fight against a referendum to legalize abortion was spearheaded by three Protestants—a gynecologist, a white Presbyterian mother, and an African American woman who was a liberal Democratic state legislator…

And even in New York, where Catholics accounted for the vast majority of the movement’s activists, there was more religious diversity than the media often acknowledged, partly because Catholics had joined forces with Orthodox Jews. In fact, one of the keynote speakers at the April 16 pro-life rally in Central Park was an Orthodox Jewish rabbi who served as president of the Rabbinical Alliance of America. One of New York City’s most vocal pro-life advocates was a liberal Lutheran minister who was best known for his protests against the Vietnam War and his advocacy of civil rights… In Minnesota, the leader of the state’s pro-life campaign was a liberal Methodist whose physician husband was a member of Planned Parenthood.

In his book Third Time Around, author George Grant admonishes the pro-life movement to reclaim this diverse heritage, writing, “Pro-life efforts have been an integral aspect of the work and ministry of faithful believers since the dawning of the faith in the first century… the true church has always stood for the sanctity of all innocent life in contradistinction to the pagan consensus for abortion, infanticide, abandonment and euthanasia… In the present struggle to uphold our 2000-year-old heritage, it would stand us in good stead to pay heed to this pattern — this legacy — and to reclaim it.”