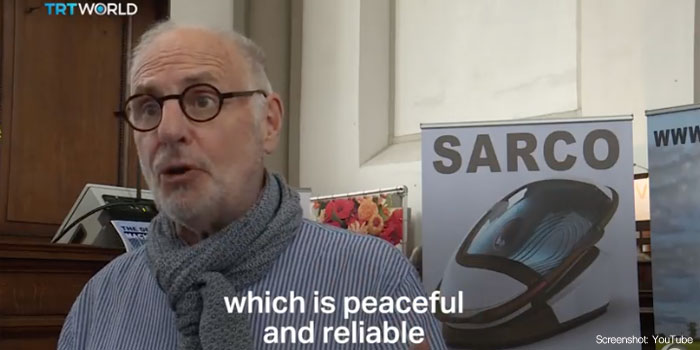 Assisted suicide is increasing in popularity across the world, with Hawaii becoming the latest state to legalize it. Advocates brush off any potential ethical issues, arguing that assisted suicide will only be available for those who are terminally ill and suffering, while ignoring the abuses that are taking place. And the reality is that assisted suicide never remains about preventing people from suffering unspeakable pain; once legalized, it never stops.

Case in point: A funeral show in Amsterdam had a controversial display of a suicide machine, which its maker nicknamed “Sarco,” for sarcophagus. The machine allows its occupant to die with just a click of a button, and can be made with a 3D printer. Invented by Australian euthanasia activist Philip Nitschke and Dutch designer Alexander Bannink, the machine even comes with its own coffin.”The person who wants to die presses the button and the capsule is filled with nitrogen. He or she will feel a bit dizzy but will then rapidly lose consciousness and die,” Nitschke explained, saying he wants to have the first fully-functional machine built and ready to use by the end of this year.

Then, Nitschke plans to put the design for the machine available online. “That means that anybody who wants to build the machine can download the plans and 3D-print their own device,” he said. His goal is to give people the ability to kill themselves even if they lie in a state or country where assisted suicide is not legal, without having to die violently. “I believe it’s a fundamental human right (to choose when to die). It’s not just some medical privilege for the very sick. If you’ve got the precious gift of life, you should be able to give that gift away at the time of your choosing,” he said. Nitschke even set up a virtual reality experience, that allowed users to experience what it would be like to sit in the machine.

This makes it crystal clear: that to assisted suicide advocates, this isn’t a matter of so-called “death with dignity”. It’s about death, period. Death is glorified now: abortion, assisted suicide, euthanasia. It’s glamorized in our culture. And if we begin to come up with acceptable reasons for people to die, it doesn’t take long for the dignity and value of life to be chipped away, little by little. Suicide prevention is pointless now; if someone wants to die, why bother stopping them? All we need is a 3D printer, and anyone with any suicidal feelings can carry it out easily, thanks to this machine. They get to die, everything neat and tidy, and why should we care? If someone wants to die, they should be allowed to die — so says the assisted suicide advocates.

This is the culture of death in action.