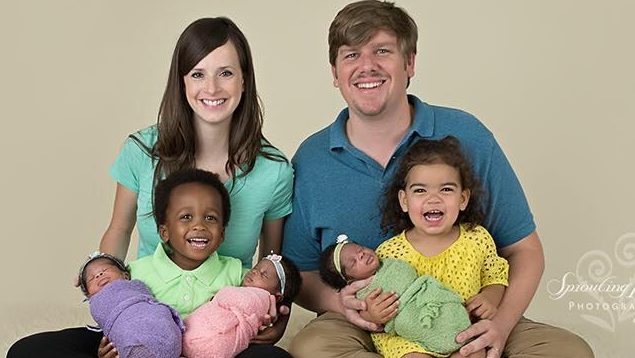 Every now and then, pro-abortion activists try to claim that pro-lifers don’t care about all embryos – just the ones in abortion clinics.

These abortion advocates will argue that pro-lifers don’t fight to save any of the 625,000 plus embryos currently frozen in the United States — but just because something isn’t covered by the media doesn’t mean it isn’t happening. Pro-lifers care about all lives, and Aaron and Rachel Halbert prove that.

The Halberts had already adopted two young children when they learned about the possibility of adopting embryos. They decided to adopt a set of twins through the National Embryo Donation Center [NEDC], but when they went for their first ultrasound, the doctor informed them that there were three babies. One of the eggs had split and they were now triplets, including a set of identical twins.

After learning they were expecting triplets, Rachel Halbert began to cry.

In April of 2016 the three baby girls – Ryley, Whitley, and Anne Waverly, were born and went home to join their big sister and brother. They had been created 15 years earlier and had remained frozen for all that time.

“…[W]hat a blessing it is for our family to be able to adopt the embryos and for me to be able to carry these children to term and then give birth and get to experience that and it was a blessing for me just to see that it wasn’t just a pro-life thing but it was, no, these are children. These are, for us, these are image bearers of God and we are so thankful for their work of trying to preserve and to keep and to give these embryos the best chance at life as possible,” said Rachel Halbert.

The couple is grateful to their children’s biological parents for giving them a chance at life rather than destroying those lives.

“On thing that stuck with me is just really the fact that NEDC is giving embryos the best opportunity to survive but also giving parents who’ve done IVF the chance to allow their embryos to be adopted and that’s a big difference. It’s not an exchange of property,” said Aaron Halbert. “[…] We’re talking about children, souls – and so when I look at our three little girls we’re going to talk about the reality that their biological parents are heroes to them. They could have destroyed them. They could have given them away or to science or done whatever they wanted but they placed them for adoption for 15 years later – that they would have life.”

Many frozen embryos are donated to science and others are simply discarded because they are considered “extra” or “leftover” by their parents and because it costs hundreds of dollars a year to store embryos. When those parents place their embryos for adoption instead, it means that those parents know the value of their children’s lives. They are validating the human life in embryonic form.

Unfortunately, a survey of more than 1,000 people who had embryos left after IVF showed that nearly 60 percent said they were “very unlikely” to donate those embryos to another couple trying to have a baby. Only 7 percent were “very likely” to donate.

“It was the idea that their child was walking around, and they couldn’t ensure it was having a great life,” said lead author Dr. Anne Drapkin Lyerly, an ob-gyn and associate director of the Center for Bioethics at the University of North Carolina at Chapel Hill. “If they couldn’t raise that child, many felt that the responsible choice was to make sure they didn’t become children in someone else’s life. One woman told me, ‘I’d rather have them destroyed than born.’ ”

No one can ensure a great life to anyone. It’s heartbreaking to think that so many parents would rather have their children dead than alive simply because they wouldn’t be the ones parenting those children. As a result, human beings are aborted, or left frozen for over a decade until the parents decided to end those lives.

While pro-lifers may not stand outside of fertility clinics protesting the destruction of embryos, they are actively trying to save them. Children are not commodities, and the pro-life community won’t stop until life is protected at every stage.