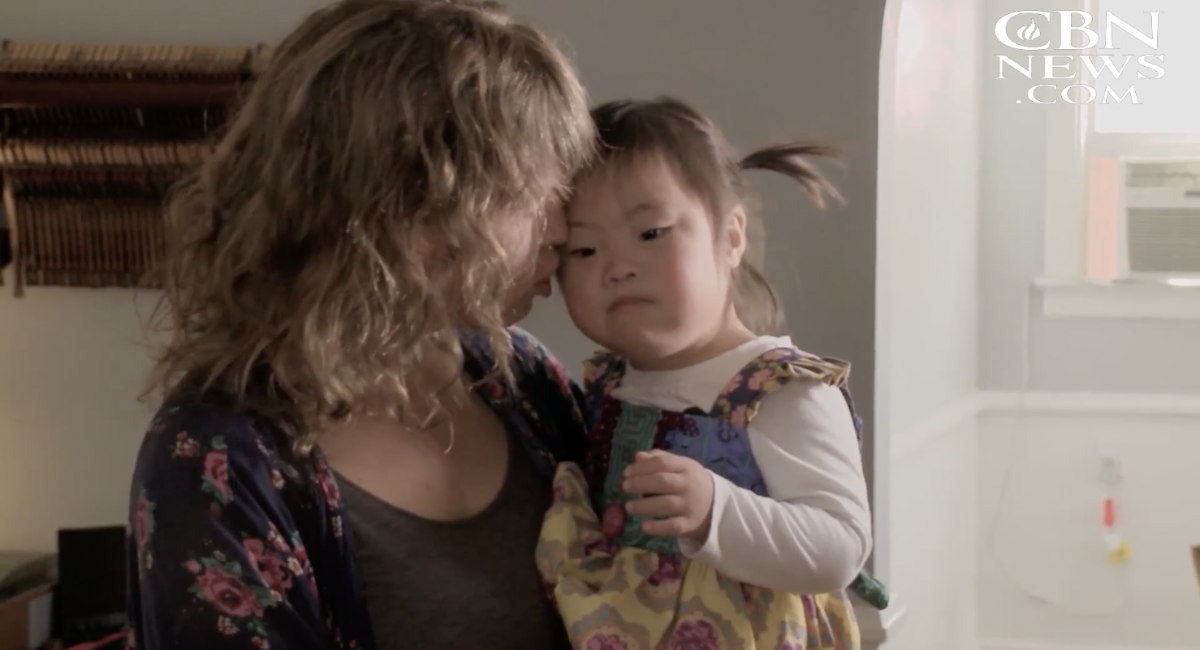 Where some see challenges, Randall and Kelly Nichols of Hampton, Virginia, see opportunities. Nowhere was that more true than in the adoption of their two daughters with Down syndrome.

The couple, who were already parents to three children, didn’t have the money for an expensive international adoption. They were also told that adopting children with special needs would ruin their lives. But the couple didn’t let those concerns stand in their way.

According to a 2016 interview with CBN News, the couple always knew they would adopt and they were open to any child who needed a home. Initially, they pursued adoption in the United States, but when they saw a photo of their now-daughter Aiyla in China they were instantly smitten.

To raise money for the international adoption—which can easily cost $35,000 to $40,000—the couple had to get creative. In addition to contributions from family, friends, and even strangers, the couple held yard sales, made t-shirts and bracelets, and set up a GoFundMe page that generated significant monetary support.

“We had to trust God for every dollar,” Randall said. “We knew that we couldn’t do it alone.”

Eighteen months later, the couple traveled to China to take their daughter home. The couple recalled the experience being an emotional one with many tears shed. The support they received when they arrived home was immeasurable, and they were greeted at the airport by a crowd of 20 to 30 people.

READ: Son with Down syndrome inspires parents to adopt three daughters with the condition

Raising a child with special needs is not without its challenges, but the couple says the joys far outweigh the hardships. It wasn’t long after adopting Aiyla that the Nicholses began considering adding another child with special needs to their family through adoption. In fact, the couple knew they’d adopt again when they picked up Aiyla from the orphanage. The babies there were silent because they had learned that crying was a waste of energy—no one was coming to pick them up, the couple explained.

The next adoption took place in Seattle after the couple learned of a baby girl in the NICU who had Down syndrome and multiple complex medical needs. It was a bittersweet moment for the couple. The biological mother loved her baby girl but was in the United States on a travel visa and worried she wouldn’t be able to care for her daughter.

There is a farm abroad named after their baby girl, and Randall and Kelly hope to take their daughter there to visit one day. The biological mother continues to be a part of her little one’s life through late-night video calls and photos.

“It’s so beautiful—and so hard—but we are grateful for this family God’s given us and so these phone calls feel like sacred ground,” the couple said.

A solid support system has played a crucial role in bolstering the couple and helping them to get through the countless hospital visits, therapies, and more. Not everyone, however, has been supportive. The couple said some claimed they were crazy for adopting two children with special needs.

Recognizing the need for a support system to care for the needs of vulnerable children and families impacted by foster care and adoption, the couple launched the non-profit organization, ECHO Family Care Partners. The organization is built on the premise that every child deserves a safe and stable family, and every family needs a supportive community.

The Nicholses’ story is a breath of fresh air in a time when so many parents are encouraged to abort their Down syndrome babies. The Nicholses—and so many other families—recount the unbelievable joys of having a child with Down syndrome. Even so, tragically, roughly 67% of preborn children with a Down syndrome diagnosis in the United States are aborted.

Families like the Nicholses serve as an inspiration for families facing the unknown when they learn their child has been diagnosed with Down syndrome or are considering adopting a child with special needs. Their story is a beautiful reminder of the true reality of a Down syndrome diagnosis—that the joys far outweigh the hardships.