UPDATE, 12/3/20: Braden Mull, the father of the child, has pleaded guilty to child endangerment and abuse of a corpse in this case. In exchange for his agreement to testify against Kalina Gillum, the original charges of involuntary manslaughter and tampering with evidence were dropped. He faces up to four years in prison and a fine of $12,500. Read more here.

2/13/20: An Ohio couple is facing felony charges after they allegedly induced the delivery of their 29-week-old preborn baby boy using a type of abortion drug, intentionally causing his death. The incident occurred on September 19, 2019, but according to ABC 6, the indictment was just unsealed on Monday.

Kalina V.E. Gillum, 21, and her boyfriend Braden C. Mull, 25, were indicted last week on charges of involuntary manslaughter, endangering children, tampering with evidence, and abuse of a corpse. According to the Canton Rep, the couple is accused of “violating a duty of care, protection or support,” and “treating a human corpse in a way that would outrage reasonable community sensibilities.”

Jenny Gonzalez-Wells, Assistant Licking County Prosecutor, said that Gillum took 12 Misoprostol tablets which the couple had ordered from India. “The intention,” said Gonzalez-Wells, “was to induce labor and terminate her pregnancy. She was in her third trimester, so she [was] between 28 and 29 weeks pregnant a the time.”

Misoprostol is a drug used to treat ulcers or induce labor, and it is also the second pill taken during a first-trimester chemical abortion (abortion pill). During a chemical abortion, Misoprostol induces labor and leads to the delivery of a preborn child after the first pill (Mifeprisotone) has caused the baby’s death. Misoprostol alone will not cause the preborn baby to die. Taking Misoprostol without having first taken Mifeprisotone for an abortion is not approved by the FDA.

The day after taking the Misoprostol, Gillum gave birth to a son in the bathroom of their apartment. According to 7 News Boston, “A coroner later determined that there was nothing medically wrong with the baby, reports indicated.” Children born as young as 21 weeks can survive outside the womb with medical assistance. Police say no attempt was made to provide the baby with medical care and the couple did not call 911. Gillum, however, went to Licking Memorial Hospital with Mull for medical treatment for herself with the umbilical cord still exposed. Since there was no baby, doctors became suspicious.

A doctor at the hospital contacted police and noted that the umbilical cord was “too large for it not to have been a full term infant.” Police searched the couple’s apartment and found the baby boy in a shoebox inside of a garbage bag. Additional evidence recovered by police showed that the couple purchased the Misoprostol tablets knowing that Gillum was in the third trimester with the plan to abort the baby because they already have one child — who is not in their custody — and they did not want another.

Despite the fact that taking Misoprostol alone during pregnancy will often lead to a live birth, groups such as Women on the Web actively and illegally distribute these abortion drugs worldwide. Some of the groups have been warned by the FDA to cease and desist; they refuse. Other pro-abortion sources have instructed women to obtain Misoprostol from a veterinarian should they be unable to get it elsewhere. If they experience complications, the women are told to go to the emergency room and claim they are miscarrying. Gillum’s story reflects what these groups tell women as shown in the image below: 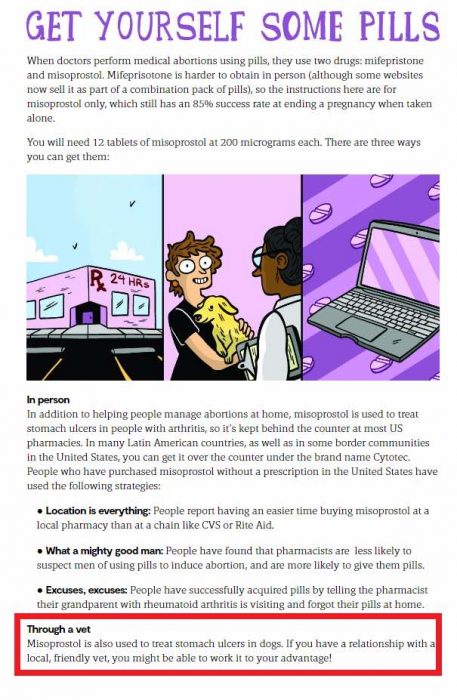 Gillum and Mull are each being held in the Licking County jail on $150,000 bonds.

Editor’s Note, 2/13/20: An earlier version of this article indicated the baby was “born healthy.” This has been corrected to state that the coroner found that there was “nothing medically wrong with the baby,” according to 7 News Boston.