Sen. Cory Booker (D-NY) is making sure everyone knows how much he favors abortion while simultaneously showing hypocritical support for certain pregnant women. According to CNN, Booker has announced a host of new hires for his 2020 presidential campaign, including a former top staffer of the pro-abortion group EMILY’s List, who happens to be pregnant and will be mothering an infant through the majority of Booker’s presidential campaign.

Julie McClain Downey worked as senior director of campaign communications for EMILY’s List (a group whose stated goal is “to help elect more pro-choice Democratic women”) and has signed on as Booker’s national director of state communications. Her particular state of expertise is New Hampshire – her home state – where she worked as Hillary Clinton’s 2016 state communications director and as communications director for the New Hampshire Democratic Party. Her husband Sean Downey is also employed by Booker as a senior New Hampshire adviser. The news that has supporters most excited it seems, is that McClain Downey is currently pregnant. Upon learning this, women tweeted some interesting comments, especially given the fact that Booker is running on a pro-abortion platform — one so extreme that it refuses to condemn outright infanticide:

“Congrats to (all 3 of) you!!! Love that this campaign is full of babies and full of joy.”

If “progressive values” actually promoted the belief that women can have careers and babies at the same time, that would be amazing. But it’s not true. Progressive values include abortion, and the abortion industry tells women that they aren’t strong enough to be both mothers and career women or college students, and must have access to abortion in order to be successful. It’s pro-lifers who promote the idea that women can be mothers and have their careers and education too. 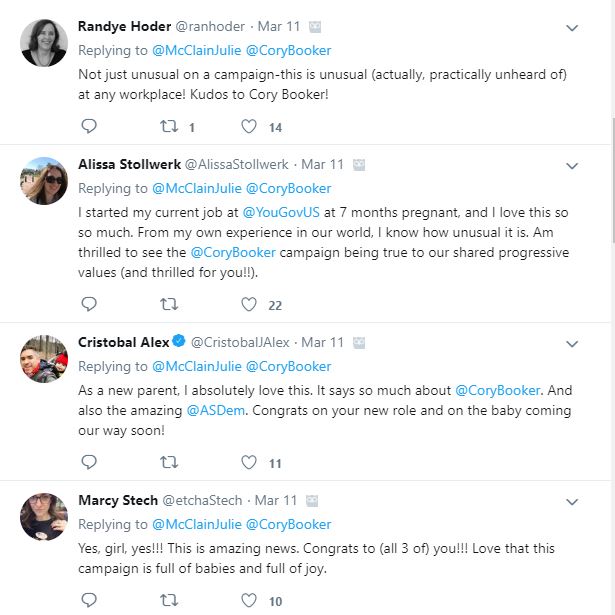 🚨 personal news 🚨 I am so excited to be joining the incredibly talented team with #Cory2020. Not only do a get to work for an inspiring candidate with a remarkable and hopeful vision for our country, but I get to do it in my home state. (1/) https://t.co/HnZc4lMTVO

The hiring of a pregnant woman shouldn’t be big news, but it is. It’s also ironic, given Booker’s 100% pro-abortion voting record. Pregnant women continue to face discrimination in the workforce, thanks to abortion’s widespread availability, leading to the expectation that if a woman wants to work, she should just abort, because she can’t parent and work. (Somehow men aren’t subjected to the same ideas on parenting while working….) Not only do pregnant women struggle to secure work, but they are often treated poorly at their jobs or even fired after announcing their pregnancies or giving birth. This disgraceful treatment of pregnant women by employers is one of the reasons that abortion is so prominent in our society. Women are constantly told that they can’t have careers and be mothers, and no one shouts that louder than abortion proponents.

Even pro-abortion actress Rose McGowan has said she “could not bring a child into my world and simultaneously change the world” so she had to have an abortion. Rapper Cardi B recently admitted she was pressured to abort her baby in order to protect her career. She chose life. But it makes sense that the abortion industry would lie to women and tell them they need abortion to have successful careers, since they make their money from abortion. If pregnant women feel empowered, supported, and valued at work, then they won’t feel pressured to have abortions in order to keep their jobs.

Post-abortive women are at an increased risk of drug and alcohol use, depression, and suicide because of abortion. Women who have had previous abortions also have trouble bonding with their children born later. Abortion is the antithesis of pro-woman and pro-families.

I stand with you and Planned Parenthood. Thank you. https://t.co/SDtP5gal4A

On the one hand, by hiring McClain Downey, Booker is showing that women can be mothers and have their careers — but on the other hand, he supports the abortion industry, which markets abortion to women by convincing them of the exact opposite. By hiring a person who is deeply devoted to legal abortion and by holding a 100% pro-abortion voting record, Booker is cementing the fact that abortion is a huge part of his campaign identity.

Congratulations to McClain Downey on her new baby and her new job. Hopefully, having this position will open her mind to the fact that abortion does nothing to make the world a better place for women who want families, education, and careers. No woman should feel that she must choose between abortion and her career.