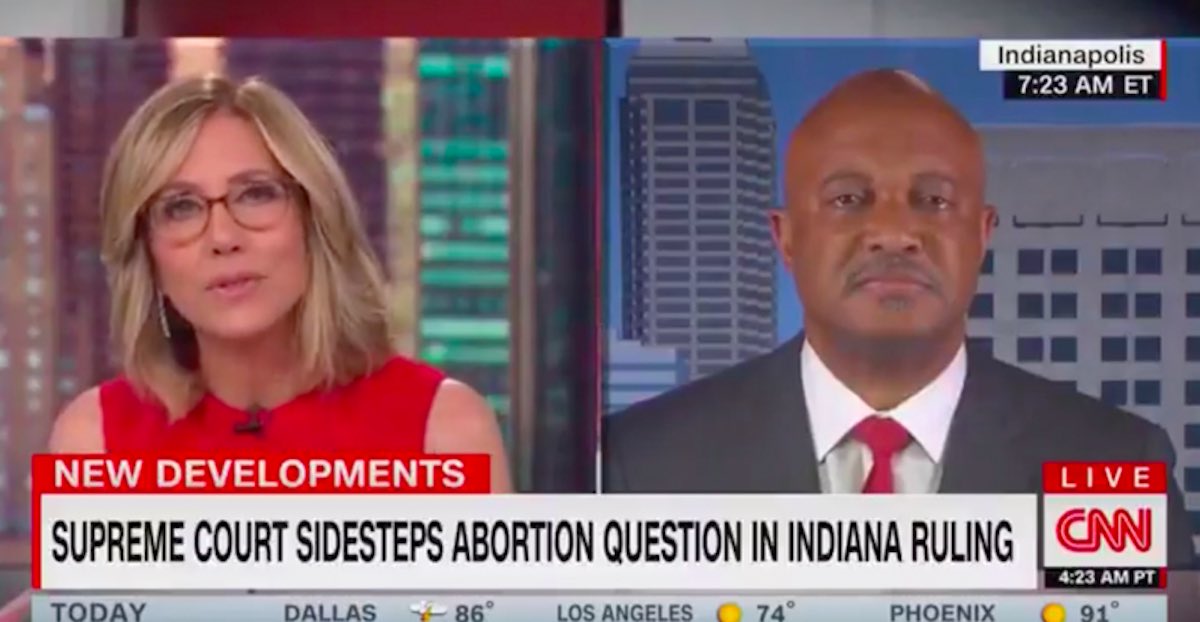 CNN host Alisyn Camerota’s interview with Indiana Attorney General Curtis Hill has people raising eyebrows after Camerota repeatedly asked why anyone would want a family to be forced to have a child with a disability. Hill appeared on CNN at the end of May to discuss Indiana’s law banning eugenic abortions, recently overturned by the Supreme Court. In these abortions, a parent chooses to kill his or her preborn child because of race, sex, or disability. While the part of the law mandating respectful burial or disposal of fetal remains was upheld, the conversation between Camerota and Hill focused almost solely on eugenic abortions.

“Where I want to focus in on is the first part that we just described,” she began, “where Indiana had tried to block women from getting abortions if it were based on a disability. And I’m just curious about that one; why… why would you want a family to have to have a child with a severe disability?”

Hill remained stone-faced, but answered her offensive question honestly. “Well, the issue that the general assembly faced was not with regard to the question you pose; it’s the question of the rights and consideration of the unborn child in terms of discriminatory actions of eliminating that opportunity at life,” said the attorney general. “Making a decision based solely on race or disability certainly is a discriminatory practice. And no decision in terms of whether or not to have a child should be based on that solely.”

Still, Camerota continued to press the point, insisting that people who receive a prenatal diagnosis of a disability need access to abortion, but Hill would not back down. “We have certainly examples every day of children who appear to have disabilities or concerns or problems, prenatal, that are born and live very productive lives and families who support those children,” Hill said. “It’s a matter of whether or not it’s appropriate to use that as sole basis.”

From just this morning: watch as CNN’s Alisyn Camerota repeatedly asks why we shouldn’t just kill all the babies with disabilities. pic.twitter.com/eS7BdEGyn9

Camerota reiterated her point about “severe disabilities,” asking, “That child will have so many problems and will most likely not live past their first birthday. Why would lawmakers force parents to bring that child to fruition?” and also asked, “Why is that a good thing for the state of Indiana?”

In other words, Camerota wants to know why everyone wouldn’t just want to exterminate all the babies with disabilities before birth. This kind of gross ableism is exactly why bans on eugenic abortions are needed.

What Camerota seems incapable of understanding is that people with disabilities deserve to be protected from abortion because they are human beings, like everyone else, who have an intrinsic right to life. A disability does not make their lives less valuable or less worth living; it does not mean they cannot be productive or lead fulfilling lives. And insinuating that it would be better for the country if people with disabilities just weren’t even born to begin with is the kind of ableism that makes it harder for people with disabilities to be successful and included in our world today.