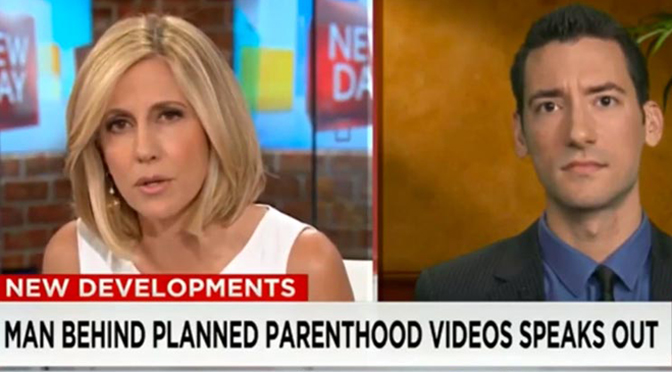 When in all else fails, project your own sins onto your accusers. Last month, Live Action’s Susan Michelle took Planned Parenthood President Cecile Richards and NARAL President Ilyse Hogue to task for trying that strategy with the Center for Medical Progress, which these proud, professional perpetrators of fetal violence claimed have ties to “violent extremists.”

As Susan explained, the basis for this link is that Operation Rescue President Troy Newman is a CMP board member, and that “Scott Roeder, who killed [late-term abortionist George] Tiller, would call Operation Rescue on the phone (as any member of the public can do), but he was not part of their group.”

CAMEROTA: Critics of your organization…say that you’re not journalists, as you purport to be on your website, but rather, you’re violent extremists […] Do you have any ties to Operation Rescue?

DALEIDEN: First, number one, I’m not a violent person and I never have been and I never will be. Troy Newman is one of the board members of the Center for Medical Progress, and Troy is a good friend of mine.

This is sleazy on two levels. First, adding to Susan’s point above, Mediaite’s Alex Griswold noted that “there are two organizations that actually went to court over the trademark for ‘Operation Rescue.’ What used to be Operation Rescue West is now Operation Save America, and is considerably more radical than the organization run by Newman.”

Isn’t this the sort of fact checking professional journalists should do before running with the accusation on the air? Last time I checked, the job entailed a little more than passing along talking points from the organizations whose misconduct you’re reporting on.

Second, Jack the Ripper could sit on CMP’s board and it still wouldn’t make the footage they’ve released false. As Allahpundit at Hot Air asks, “If the Black Panthers recorded police brutality with hidden cameras, would the cops’ behavior be excused because of the Panthers’ radicalism?” (That scenario, by the way, is not hypothetical at CNN.)

Of course not. The people on tape work for Planned Parenthood. They talk about the obviously human characteristics of the children they kill, rummage through piles of tiny severed limbs and organs, and craft execution methods specifically to keep the parts nice and lucrative. These things are true and relevant regardless of their messenger.

But never mind that. I heard on the news that those anti-abortion video guys are kinda somehow hooked up with “violence,” so that means I can ignore all the violence they caught on tape.

If this demonstrates anything, it’s that we have a problem even sicker than anything Planned Parenthood has been doing behind closed doors: that while there are rare exceptions, the majority of the American Left, and virtually all of their thought leaders, elected officials, and professional activist class, apparently finds nothing too evil to change their assumptions or loyalties.

Any superficial distraction will suffice to invalidate the truth staring them in the face, no matter how dishonest irrelevant. For PP/NARAL/CNN zombies, it’s vague talk of “violent extremism.” For Senator Elizabeth Warren, it’s cheap sneering about the 1950s.

Kirsten Powers, one of the rare left-wing national pundits who draws the line at such madness, is right to warn that Planned Parenthood’s shills should fear how history will look back on them. But we’ve still got a long time before those books are written… and in between now and then, we should steel ourselves to witness how much more depravity they’ll be willing to fit in where their souls should be.