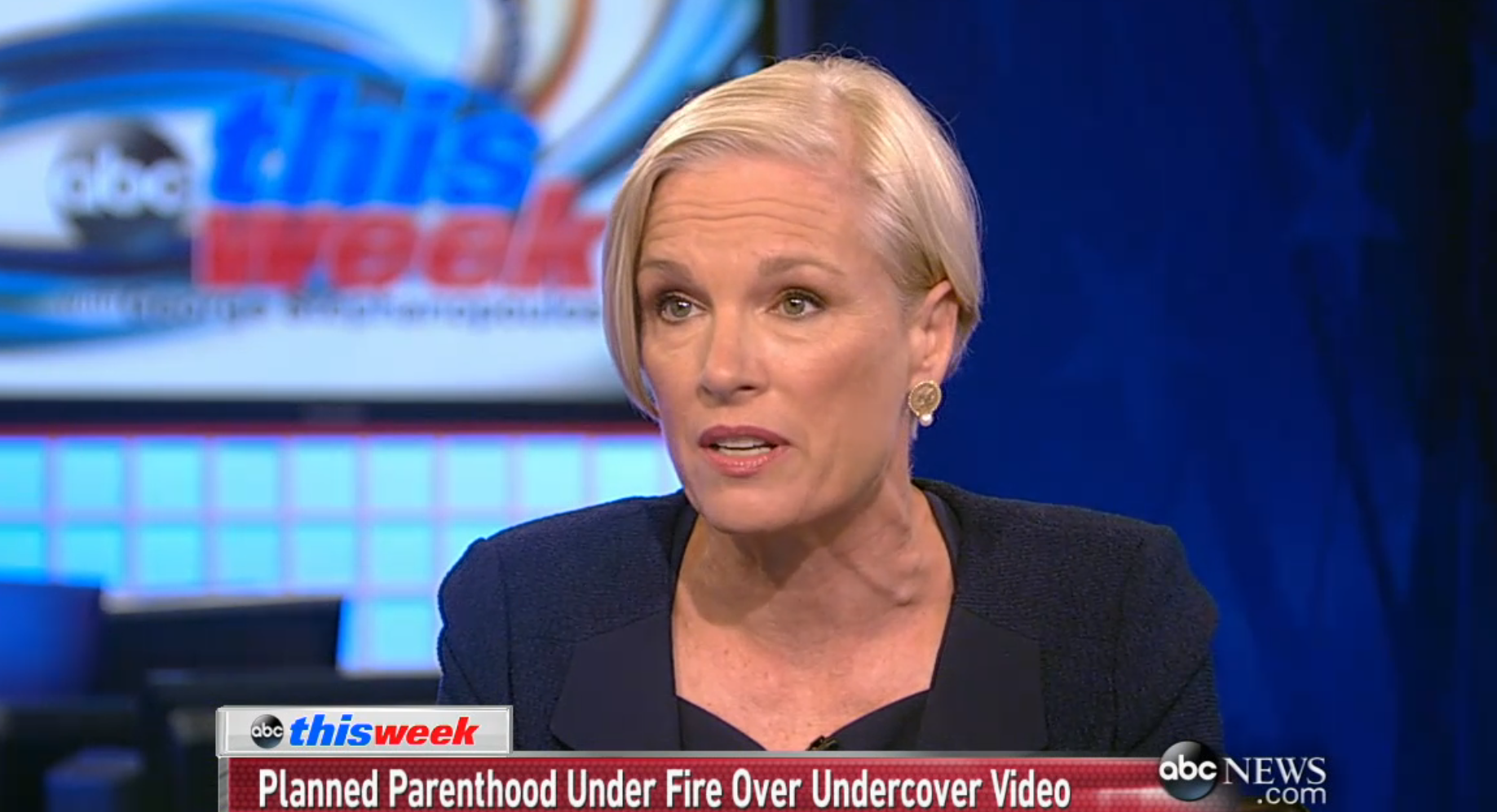 That’s about all Cecile Richards, President of Planned Parenthood, could say in her first interview since the Center for Medical Progress released undercover videos exposing the organization. On ABC News’ “This Week,” Richards denied the allegations against Planned Parenthood, but instead of explaining why they were untrue, she, used her entire segment to accuse the video makers and repeat the same few phrases.

Otherwise,  she had no answers.

Richards insists she isn’t worried about what the upcoming videos will show because this is a “three-year, well-funded effort by the most militant wing of the anti-abortion movement in this country to try to entrap doctors, and, of course, highly-doctored videos.” Insisting that all the important context was edited out, Richards conveniently forgets that the full, unedited videos were released alongside the edited ones.  The full versions are, in fact, far more incriminating then the edited videos.

But, Richards harps that they are “highly selectively edited.” And then she tries to throw accusations on CMP by using slander. Richards says the people behind the videos are “part of the most militant anti-abortion movement that has been behind the bombing of clinics, the murder of doctors in their homes and in their churches, and that’s what actually needs to be looked at.”

She’s alluding to Dr. George Tiller, the late-term abortion doctor who was murdered in church by a man who acted independently. Scott Roeder, who killed Tiller, would call Operation Rescue on the phone (as any member of the public can do), but he was not part of their group. Operation Rescue’s Troy Newman, sits on the board of CMP, so the abortion giant is trying to tie CMP to murder.

Then came Scott Roeder, who acted in frustration borne out of ignorance… He shot and killed Tiller on May 31, 2009, claiming that all legal avenues had been exhausted and that his action was necessary to save the lives of pre-born babies. Nothing could have been further from the truth… Roeder was no hero.

No tie exists between CMP and murder. But it’s apparently all that Planned Parenthood can try to connect. Words like militant have dark connotations, and Richards knows that. She uses the word so often, one might wonder if her vocabulary is very large.

Perhaps a thesaurus would be in order, if her efforts were not so concerted, purposely intended to create doubt in people. Richards seems to believe that if she says militant enough, people will think it is pro-lifers who are militant, rather than the abortion giant, who militantly uses the same words to make an ineffectual point.

As the host asks her question after question, Richards insists that Planned Parenthood has broken no laws and that the health care and safety of their patients is the highest priority.

“These activist don’t care about women’s health care,” she says. And she harps again that the point of this investigation was simply to “entrap doctors.” Entrap is another word with an accusatory connotation. Planned Parenthood obviously employs strong rhetoricians (probably at taxpayer expense), but a few well-placed words can’t get them out of this one.

As the host points out that the unedited videos at available online just as the edited ones are, Richards insist that those longer videos have the doctors saying at least 10 times that they do not profit. So the host shows a clip from Dr. Mary Gatter’s video, where Gatter is clearly haggling on prices. When the host asks Richards about this, she, with a straight face, says “absolutely not” – that it was the buyer who was haggling. This is mystifying, since the buyer wasn’t the one talking in the clip and since, by definition, haggling takes two.

Of course, Richards pulls the healthcare card, saying that since so many women depend on Planned Parenthood for their “basic healthcare needs” like cancer screening and birth control, the extremists want to take that away from those poor women who live in under-served areas. What she neglects to mention is that if the taxpayer funding were taken from Planned Parenthood, it would go to actual medical clinics, who do things Planned Parenthood doesn’t do – like mammograms. These medical clinics also exist in under-served areas. Women would still have access to all true medical health services, apart from abortion. Taxpayer money should, of course, go to true medical services – not abortion and the selling of baby parts.

Rep. Diane Black, who has proposed legislation to defund Planned Parenthood, said in response to the interview:

Unable to offer a proper defense for her organization’s shameful behavior, Ms. Richards instead launched attacks against pro-life Americans who are rightfully concerned about what these undercover videos have revealed. She said we want to ‘cut off funding for basic health care for women’ when the truth is that defunding Planned Parenthood would not decrease the overall amount of funding for women’s healthcare. It would instead direct taxpayer dollars to other, more reputable providers like the nearly 1,200 federally qualified health centers (FQHCs) across the country that provide preventive care to low-income and vulnerable populations without performing abortions.

Richards says something else so ironic it would be funny, if it were not about killing babies: “We do more every single day to prevent unintended pregnancy than any organization in the country.” That’s one way of putting it.

Adding to the irony is her firm statement that they are a “one hundred percent nonprofit company.” That’s a tough pill to swallow from a woman who makes $590,000 a year and whose “nonprofit” rakes in over $1.4 million in taxpayer dollars every day.

Richards also flat-out denies that her abortionists adjust the abortion procedure to get the right fetal parts for buyers. Even though the host tells her that’s on the tape, she returns to her redundant chorus that the videos are a  highly edited project to “entrap doctors.”

She does stutter for a moment though, as the host asks her about the comment of a “less crunchy” abortion After she finds her words, Richards returns to the “out of context,” rhetoric – seemingly lacking basic understanding that the conversation was played in context in the full video, as well.

And, in case that wasn’t enough hyperbole for viewers, the rich ruler of the the organization which provides more abortions than anyone, says Planned Parenthood helps to save lives because those baby organs are used for important research like a vaccine for the Ebola virus. Killing lives to save lives seems to be the goal here.

Richards says this should be “laudable”; in actuality, it’s despicable.

Before the interview is over, Richards adds more awful irony when the host asks what reforms Planned Parenthood will take in response to these videos (apart from apologizing for one doctor’s tone). She says, about the “militant antiabortion activists”: “The most disgusting part of this, she says, is that the people who made the videos lied.”

Actually, what the most disgusting part is that Planned Parenthood uses women in moments of crisis to extract their “fetal tissue” (otherwise known as babies’ hearts, lungs, and livers) and body parts so they can charge money to deal with research labs.

Richards says she’s looking forward to the facts coming out. So are the American people.