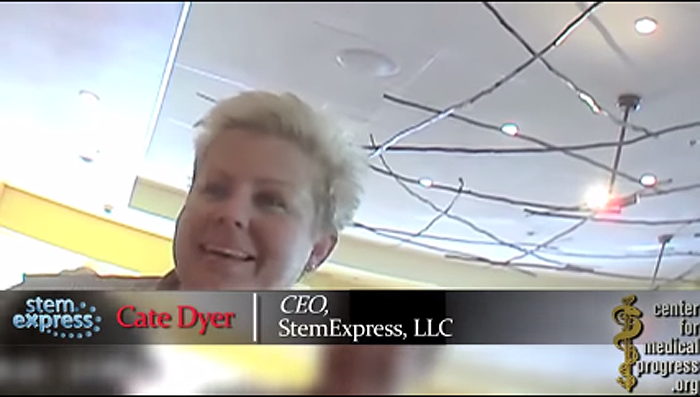 An eighth video released this morning by the Center for Medical Progress reveals even more grisly details about the trade of aborted baby parts by abortion giant Planned Parenthood and its former California partner, StemExpress.

The video details the inner workings of the California-based tissue procurement company — a middleman agency that sells baby parts to research institutions —and its business relationship with America’s largest abortion chain.

In undercover footage, StemExpress CEO Cate Dyer is caught on camera discussing its fetal parts business with a CMP investigator, even joking about how the company ships the whole heads of aborted babies to research labs. Dyer, who callously describes harvesting parts from preborn children over a meal, says StemExpress receives “a lot” of intact babies from abortion facilities. On its face, the undercover videos present strong possibility that babies are born alive and killed inside Planned Parenthood abortion mills.

SE: As you probably know, one of the issues with neural tissue, it’s so fragile. It’s insanely fragile. And I don’t even know—I was gonna say, I know we get requests for neural, it’s the hardest thing in the world to ship.

Buyer: You do it as the whole calvarium.

SE: Yeah, that’s the easiest way. And we’ve actually had good success with that.

Buyer: Make sure the eyes are closed!

SE: They’ll open the box, go, ”Oh God!” [laughter] So yeah, so many of the academic labs cannot fly like that, they’re not capable.

According to Dyer’s own admission, baby parts trade is financially beneficial for abortion clinics, as well as for StemExpress. Former employees say the company paid Planned Parenthood $50 to $75 per baby body part. The California company has also advertised that it “fiscally rewards clinics” that partner with it.

SE: Another fifty livers a week.

Buyer: Ok, so you can handle that?

SE: Yea. Just so you guys know, on the collection side for us, we’re also- as you see Megan out there in the clinic, we’re working with almost triple digit number clinics. So, it’s a lot on volume a little more than what we do. It’s a lot. So, I don’t think you’ll hit a capacity with us anytime in the next ten years. I think you’ll feel solid with that standpoint. So, I think, with that you’ll feel like doing an agreement with us. It will be consistent growth and our growth has been consistent, and it’s going to continue to grow from that standpoint.

Dyer also describes the shoddy environment of abortion facilities, stating that some have “rampant, rampant problems with bacteria” and even staph.

SE: We’ll do testing on our side, so we’ll be able to see, you know. And sometimes we’ll find that it can be clinic-specific. I’ve seen really rampant, rampant problems with bacteria in certain clinics. [laughter] Some where you’re kind of in question of should they really, you know, [laughing]

SE: So, I mean, I’ve seen all sorts of things come out of clinics, so.

Buyer: Do you feel that support from Cecile [Richards] and from Deborah [Nucatola]?

SE: Yea, oh yea. You know, everyone at PPFA. I just think that you’re in the cause or you’re not. If you’re not in the cause, they don’t need you around. They need champions and if you’re not a champion, then you should go.  That’s just- I don’t know, the clinics are very guarded, as they should be. Who do they let in their house, they let champions in their house. Right? I think it’s that same concept and ABR has just never understood that.

In a statement released with the video, Center for Medical Progress Project Lead David Daleiden addressed the issue of illegal parts sales:

Congress and law enforcement should immediately seize all fetal tissue files from StemExpress and all communications and contracts with Planned Parenthood. The evidence that Planned Parenthood profits from the sale of aborted baby parts is now overwhelming, and not one more dime of taxpayer money should go to their corrupt and fraudulent criminal enterprise.

On August 14, StemExpress announced that they were cutting ties with Planned Parenthood as the scandal continued to grow.

Equally troubling is acknowledgement from Planned Parenthood leadership and abortion industry workers that digoxin or potassium chloride —chemicals used to kill the child in utero— are sometimes avoided during an abortion procedure to preserve the fetal parts. Since these chemicals poison the tissues and organs, the revelation exposes the possibility that babies are being born and then killed in abortion facilities across the country.

Prior to the release of the video, Center for Medical Progress issued a list of preview quotes detailing the shocking statements made by the California company.

The video is now the eighth expose detailing Planned Parenthood’s barbarism and illegal profiteering from the bodies of America’s preborn children.  The investigations by Center for Medical Progress, which have sparked state and federal investigations, reveal top-level Planned Parenthood executives bartering over the price of aborted baby parts.

Since the release of the now viral videos, the U.S. Senate held a historic vote to defund Planned Parenthood, during which a majority of lawmakers voted in favor of ending the government subsidy for the abortion business. The measure though fell short of the 60 out of 100 votes needed to advance.

Multiple states have defund the group including Louisiana, Alabama, Utah, Arkansas, and New Hampshire, and probes into the practices of abortion facilities have also been launched.