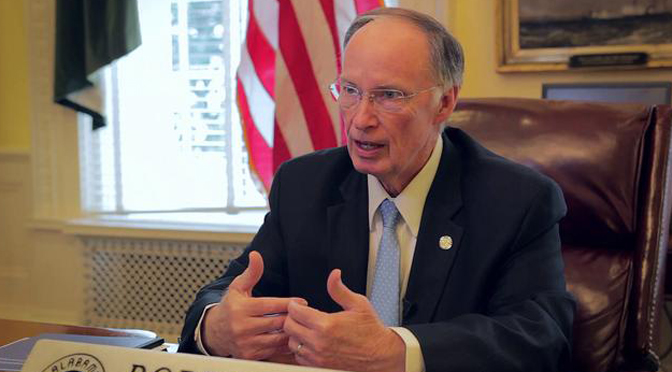 The deplorable practices at Planned Parenthood have been exposed to Americans, and I have decided to stop any association with the organization in Alabama,” said Governor Bentley. “As a doctor and Alabama’s Governor, the issue of human life, from conception to birth and beyond, is extremely important to me. I respect human life, and I do not want Alabama to be associated with an organization that does not.

In the letter Bentley sent to Staci Fox, CEO of Planned Parenthood Southeast, he wrote:

Pursuant to the Alabama Medicaid Agency Provider Agreement under section VI, Term, Amendment, and Termination, the Agency is exercising its ability to terminate the existing agreement(s) with Planned Parenthood Southeast, Inc. with fifteen (15) days written notice. The termination of the provider agreement(s) with Planned Parenthood Southeast, Inc.  will be effective fifteen (15) days after receipt of this letter.

The letter was sent via Federal Express.

Most of the money Planned Parenthood receives federally comes from Medicaid reimbursements.  The Yellowhammer News reports:

It is through the mechanism of Medicaid—whose funding is controlled through the states—that some red state governors, now including Governor Bentley, have begun their own efforts to defund abortion providers.

While critics will cry foul for poor women, it’s important to note that Planned Parenthood Southeast only operates two clinics, in Birmingham and Mobile. Both of these areas have several clinics where women may use their Medicaid for genuine health services without helping to line the pockets of the abortion giant.

Just today, a Senate committee in Alabama advanced a bill making the sale of fetal tissue and parts illegal. The bill’s sponsor, Sen. Bill Hightower (R-Mobile), said in that hearing:

The nation is shocked by videos depicting Planned Parenthood employees callously discussing the dismemberment of babies and the sale of baby body parts for profit. This is like a story out of Nazi Germany.

Bentley is the second governor to terminate Medicaid contracts in response to the undercover videos from the Center for Medical Progress, but it’s now the ninth state to ban all state family planning money from going to abortion clinics. In addition to Louisiana, Arizona, Arkansas, Colorado, Indiana, Ohio, Texas, and Wisconsin have these policies in place. Also this week, New Hampshire revoked the $639,000 in family planning funding from the state that was going to Planned Parenthood – a third of the organization’s budget. That money will now go to other organizations.

It’s likely that Louisiana and Alabama will be joined by more states doing the same thing in response to the videos.