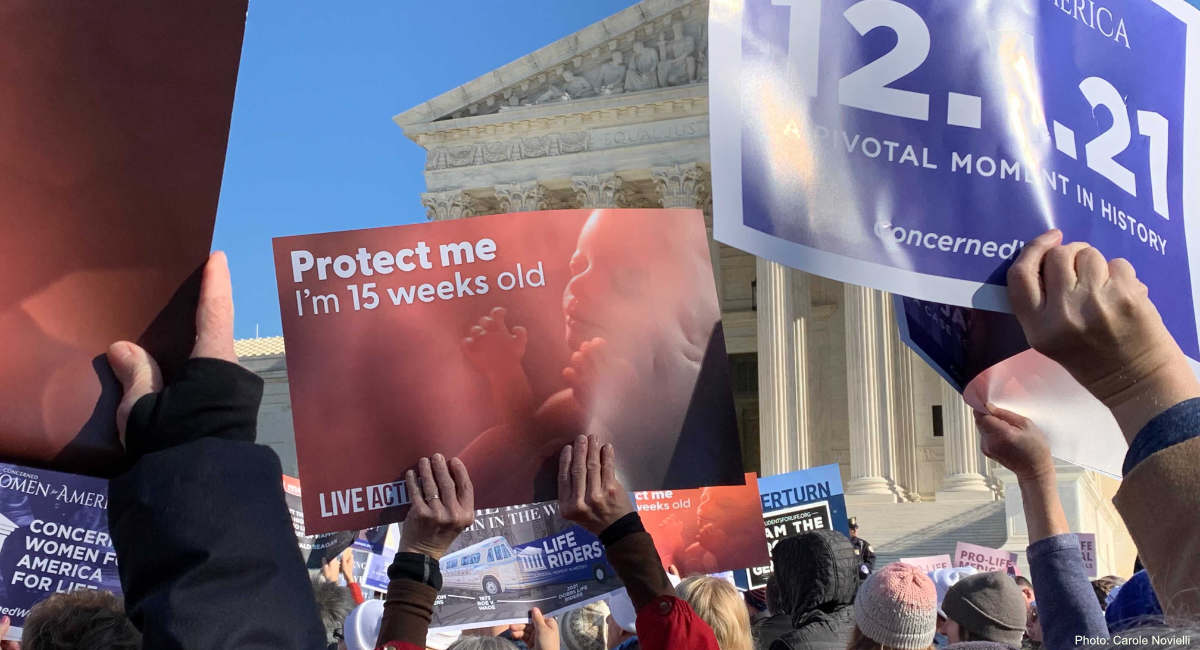 December 1, 2021, was a historic day, both in the life of this nation and in my own personal life. The Supreme Court heard oral arguments in Dobbs v. Jackson Women’s Health Organization, a case that directly challenges Roe v Wade. Thousands of pro-lifers rallied in front of the Court, their smiling faces easily outnumbering those of the abortion supporters by a margin of at least 2 or 3 to 1. I was among them.

My group started out quite early in the morning, around 6:30 or so. We walked the handful of blocks from our hotel to the Court, unfazed by the cold, too jazzed to care. I was among people who had been fighting against abortion for years — some for decades — and many of us thought we would never see a moment like this in our lifetimes.

Even if we lose this particular battle, it marks significant forward progress in the front line of the war.

The number of people on our side of the fence the police erected to separate the two camps multiplied over the course of the early hours, and by the time the rally officially started, the energy among us was electrifying. There was a palpable hope, a contagious sense of joy — perfect strangers were instant friends, united by a common passion for the most urgent, most compelling cause of our time.

I threaded through the crowd, reading signs and speaking to individuals and groups. I saw people from all walks of life — women, men, and children, including babes in arms — but mostly women. I spoke to atheists, Catholics from both east and west of the Tiber, Protestants of every variety, Orthodox Christians, Muslims, and Jews. There were signs proudly announcing the political persuasions of Democrats, Republicans, Libertarians, and self-described “anti-capitalists.” And the crowd was literally colorful — there were people of all races, sporting hair in every shade of the rainbow.

This diversity in the pro-life movement shouldn’t come as a surprise to anyone who’s been paying attention. Life is fundamental — it’s the one thing we all have in common, and is therefore something we all should wish to protect.

Late in the morning, I joined up with a group of fearless pro-life activists I know and admire — people who are not afraid to go to jail, who are really all-in. We held up our signs and chanted on the sidewalk in front of a group of abortion supporters who were posing for the media. Eventually, they got tired of our antics, gave up, and dispersed — but we went on singing, and drumming, and just generally having a good time.

It didn’t take long for us to attract a heckler.

She was about 30, dressed in a 1930’s-style cloche hat and a fake fur coat. She stomped into the middle of our circle and thrust her middle fingers into our faces, coming within an inch of our noses. “F— you!” she shouted repeatedly. It wasn’t exactly classy or eloquent — but neither is child-murder classy, nor can any amount of eloquence soften its brutality.

Several times over the course of the day, I ventured over to the other side of the police barrier. “Donate to your local abortion clinics,” shouted one vitriolic speaker on the pro-abort side, “because we need someplace to go for our abortions after we have us some hot sex.”

I wish I could say that I can’t imagine being so driven by lust that the commission of child murder in its pursuit is completely acceptable, and that I can’t imagine wanting child-murder to be legal so badly that yelling “f— you” in strangers’ faces was within the range of permissible behavior … but I can imagine it.

I bought all the lies — hook, line, and sinker.

This, in spite of the fact that I‘d had two abortions, and experienced immeasurable regret. I thought I was an anomaly, a glitch in an otherwise well-functioning system.

And I was loud about it — not about my abortions, because I was ashamed of and wounded by those. But other people’s abortions? I yelled my lungs out in support of them. I carried signs. I gave speeches on campus. I was even a monthly donor to NARAL.

But I was miserable.

As I observed the pro-abortion side and watched that young woman hurl frenzied profanities at us, I was struck by how vitriolic, how unhappy, and how crazed supporters of abortion seem and behave.

But again, this should come as no surprise. A philosophy that glorifies death can generate no joy.

On the other hand, ours is a movement characterized by hope, and I am both a product and an example of that. I have hope that the scowling, sputtering pro-abortion women and men I saw today might change. And I have hope that our country can and will change.

I don’t know what is on the minds and hearts of the Justices who will determine the fate of this nation’s forthcoming generations. But I am hopeful for the future, regardless of which way this individual decision goes. I know for a fact that transformations can and do happen, because my life has been an ongoing metamorphosis. I know that our laws can change. I know that our culture can change.

I’m proud to be an agent for transformation toward a more hopeful future for this nation; I hope you, too, will experience the joy of participating in this historic movement.