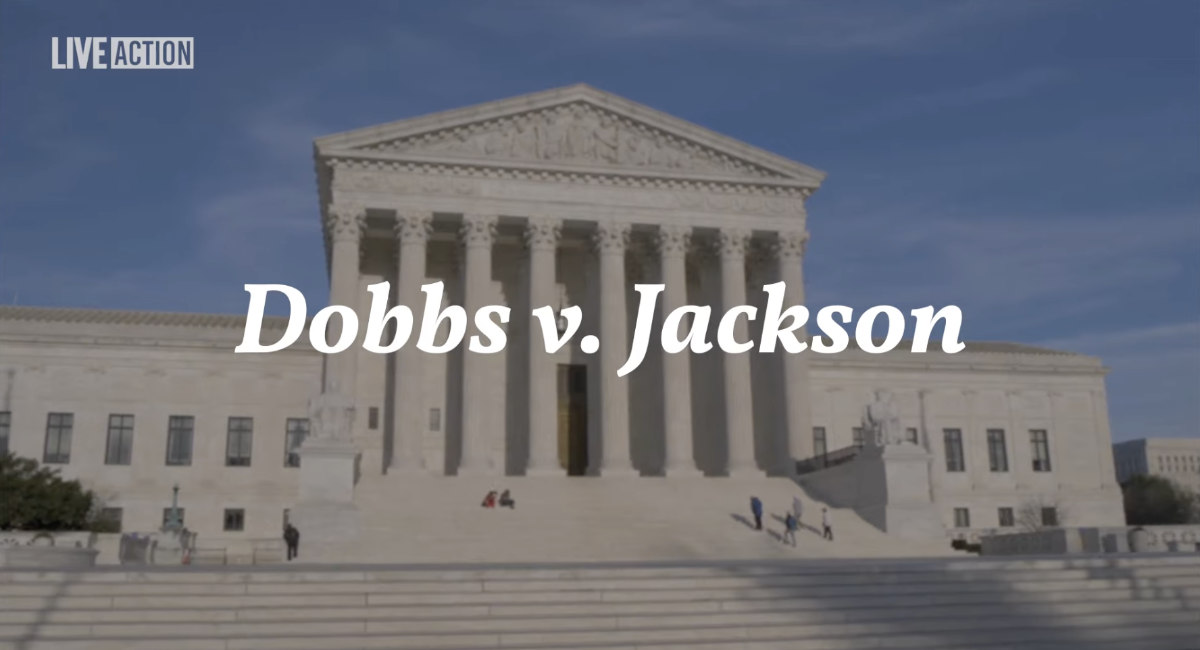 The Supreme Court is set to hear Dobbs v. Jackson Women’s Health Organization on December 1, in what many have called the most important challenge to abortion in a generation. The case was filed in regards to Mississippi’s 15-week abortion restriction, but it could also give the Supreme Court the ability to overturn both Roe v. Wade and Planned Parenthood v. Casey, landmark cases which, respectively, made abortion a constitutional right and set “viability” as the standard for when abortion can and cannot be restricted.

The state of Mississippi has specifically asked the Supreme Court to overturn Roe v. Wade. Before oral arguments begin, watch this video from Live Action for what you need to know:

Mississippi is defending its 15-week restriction against a lawsuit filed by the state’s lone abortion facility. Roe v. Wade, decided in 1973, required abortion be legal in all 50 states. Before Roe, states could make their own laws regarding the legality of abortion, with individual states having already begun legalizing it in the 1960s. Nearly 20 states had already legalized abortion by the time Roe was being considered.

In House Bill 1510, or the Gestational Age Act, Mississippi made it illegal to commit an abortion after 15 weeks gestation. By 15 weeks, the preborn child is roughly four inches long, has all of his limbs and organs, and can do things like yawn and suck his thumb. Part of the reason why so many people oppose abortion after this point is the violence inherent to the procedure committed.

At 15 weeks, the most common procedure committed is a D&E, or dilation and evacuation. This is a multiple-day procedure, which begins with an abortionist placing laminaria sticks inside the mother’s cervix to begin dilation. One to two days later, she will return to the abortion facility, where the mother’s cervix will be further dilated. Then, the abortionist will use a sopher clamp to reach inside the uterus and remove the limbs from the child’s body one by one. Typically, the final step is finding and crushing the baby’s skull; abortionists often know they have done this successfully when white fluid (the baby’s brain) runs out of the woman’s cervix. Afterward, the abortionist or a staff member will reassemble the parts of the body to make sure nothing was left behind.

The same day the Gestational Age Act was passed, Jackson Women’s Health Organization filed suit against it. A Mississippi district judge struck down the act as unconstitutional, and the state filed an appeal. The 5th Circuit Court of Appeals heard the case and affirmed the lower court ruling, which launched an appeal to the Supreme Court.

READ: The tragic decision-making behind Roe v. Wade and its disastrous health consequences

According to Noah Brandt, director of government affairs for Live Action, Dobbs is different in two key ways:

The first is sort of broad and philosophical; which is that, we’ve now had almost 50 years of case law after Roe, and this is the time where, a) the state of Mississippi is directly asking for Roe to be overruled, and b), we now have a lot of evidence of why Roe should be overruled.

The second, more practical, answer is, we have two new justices on the Supreme Court: Justice Brett Kavanaugh, and Justice Amy Coney Barrett, who have not had the chance to rule on an abortion case.

With Dobbs, the Supreme Court will be able to revisit at what term in fetal development abortion can be permitted, if at all. “Viability” has increasingly been viewed as a meaningless benchmark, as medical advancements are allowing premature infants to survive being born at younger and younger ages.

“Viability, when they say it legally, means, can this child survive outside of her mother?” Brandt said. “That is an interesting question, but it has nothing to do with whether a preborn child is human. That’s the question we should be considering when we talk about whether we ban abortion or when we ban abortion.”