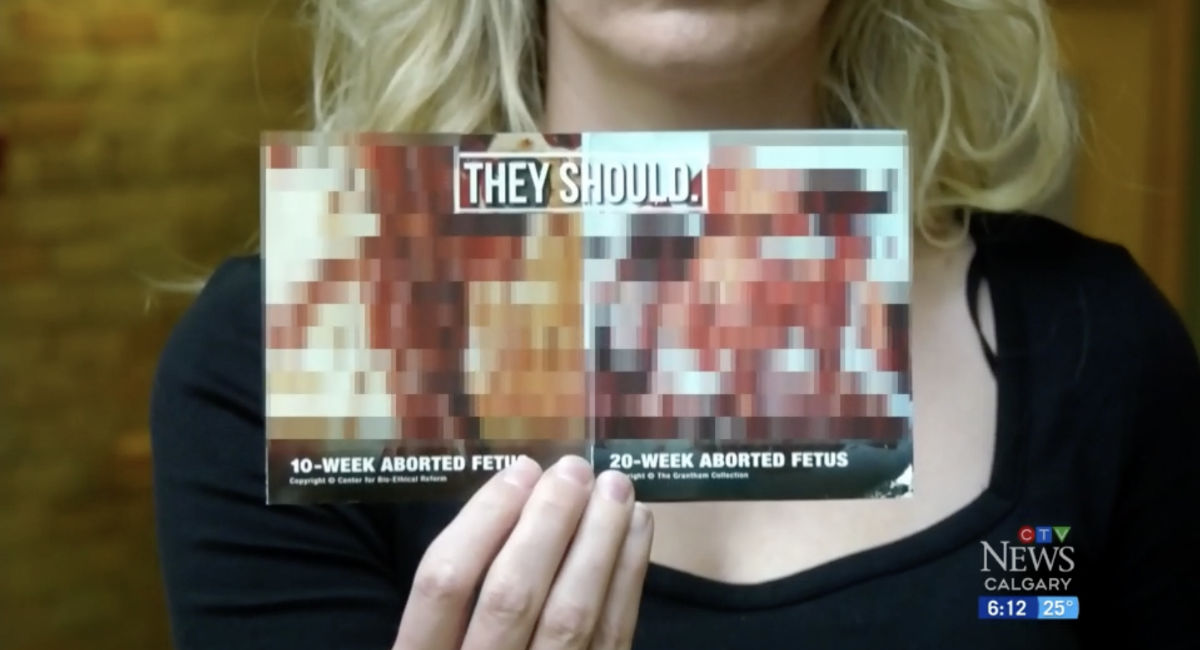 According to CTV News, Jennifer Wyness, councilor for Ward 2 in the Canadian city of Calgary, is calling for restrictions on the distribution of “graphic” pro-life flyers after having received a depiction of an aborted baby on her doorstep. Wyness believes the image was no different than pornography or gore.

“I think it’s unacceptable to allow this image to continue to go into our communities and to our front doors on private property,” Wyness said. “It was traumatizing.”

According to Wyness, many of her constituents agree. “I heard story after story of traumatization in my community,” Wyness said. “Parents had to engage in sex education conversations with young kids, four-year-olds, years before they were ready, and kids had nightmares. Women and families in the community who had suffered pregnancy loss were re-traumatized.”

Wyness has filed a notice of motion asking city officials to draft a bylaw requiring graphic imagery to be distributed in an envelope with a warning label. She claimed this would not infringe on free speech. “[W]e’re just saying the image by societal standards is unacceptable and traumatizing to our community.”

Marty Moore, an attorney with the Justice Centre for Constitutional Freedoms, expressed concern. “If the government is not targeting particular harm that may be caused by graphic images but rather targeting viewpoints, that raises a more serious constitutional concern,” he stated. He also questioned whether the bylaw would be applied without prejudice to graphic images of all varieties. “Whether it’s the consequences of drunk driving, violence of war, the effects of starvation, these kinds of graphic realities of life, will this bylaw also serve to prevent the public from receiving information unvarnished in that fashion?” he asked.

London, Ontario, passed a similar bylaw earlier this year. A violation carries a fine of $350. Katie Dean, co-founder of Viewer Discretion Legislation Coalition, said, “We need this to happen in more cities, especially Calgary, Toronto, and Vancouver. … This is not about pro-life or pro-choice. It’s about common human decency.”

The measure is likely to be approved, as a majority of city councilors have signed onto the notice of motion.