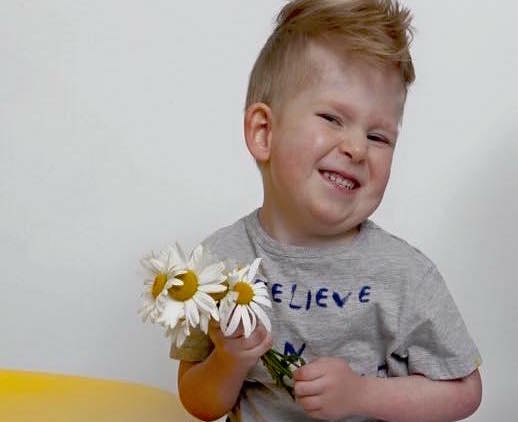 At three months gestation Shelly Wall and her husband Rob learned the devastating news no parent wants to hear. Doctors told them their preborn baby boy Noah had several health problems including spina bifida, chromosome abnormalities, and hydrocephalus. They said Noah only had 2% of his brain tissue and would likely die at or before birth. The couple was advised to abort their son.

Four years later, Noah is doing remarkably well and has been featured in a new U.K. documentary.

“We were offered termination five times,” Rob Wall said in the documentary, “The Boy Without a Brain.” “It was never an option for us. To me, we wanted to give Noah that chance of life.”

Doctors had made such a strong case that Noah would die at birth that the couple planned a funeral for their son before he was even born. But to their great joy, after Noah was born on March 6, 2012, he let out a cry.

Noah was paralysed from the chest down, but to his parents that didn’t matter. All that mattered was that he was alive.

“The first thing we heard when he was born was him taking a breath and then crying, which was unbelievable,” recalled Shelly Wall.

Surgery was performed on Noah’s back which had a large hole in it. He also had a drain placed in his head to clear the cerbrospinal fluid that was pressing on his brain. Noah was sent home, but would return to the hospital on numerous occassions due to medical complications. Still, the little boy continued to not only survive, but also to prove doctors wrong.

Noah uses both a wheelchair and braces to get around…but get around he does. Plus, not only does he sing, talk, and smile, but his brain has been expanding.

“[…] to hear his brain’s almost back to normal is beyond belief,” Shelly Wall said. “Rob and I broke down when we heard the news. It was like a dream. I’ve never known anything like it. Even the consultants were in tears. Every time we see the doctors, they just shake their head. They’re just amazed at what he can do.”

The future is still uncertain for Noah. His family knows he will face more surgeries and challenges, but they are grateful for every day they have with him. To help other families experience similar joy, they raise awareness for spina bifida and have donated two wheelchairs to Great North Children’s Hospital in Newcastle. In addition, Noah’s brain scans are being used to study spina bifida, which could lead to breakthroughs in treatments for other children.

Doctors say Noah’s brain is now nearly fully-functional — a miracle after such a heartbreaking prognosis. Noah’s life is precious, and if his parents hadn’t held onto hope and believed their son deserved a chance, he wouldn’t be here today to do the good he’s doing.