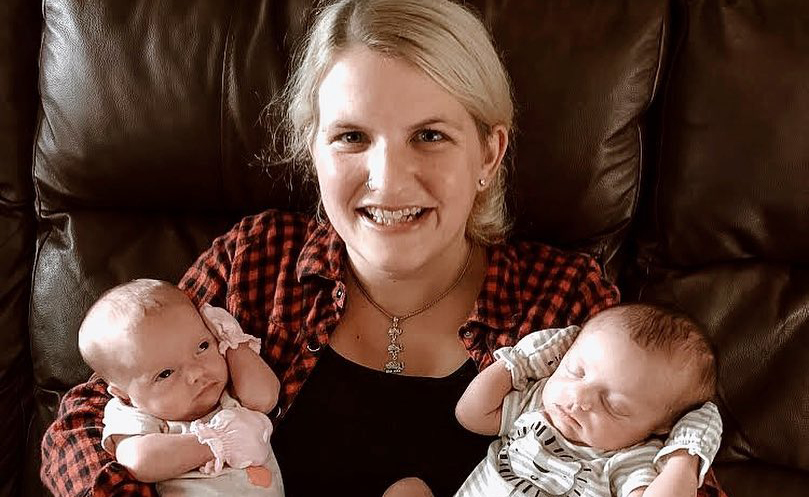 The Talk About Adoption Facebook page recently shared the beautiful story of a mom named Paige who fought against her fears and chose life for her twins. She was initially terrified, but by stepping out in faith, she overcame the negativity flooding her mind, gave birth to her babies, and then lovingly gave them to their “amazing, loving” adoptive forever family.

“I unexpectedly got pregnant with twins in February of 2018,” she said. “The birth father was not a part of my life anymore at the time. I was also shocked to find out that I was carrying not one baby, but two! Talk about having a bomb dropped on you! I immediately went into fear mode.”

Paige says her fear led her to negative thinking, much like many women and girls facing unplanned pregnancies. Too often, those fear wins and abortion begins to feel like the only choice – which means it isn’t a choice at all.

“Some of my initial thoughts were, ‘I can’t go through with this,’ ‘I’m not ready to be a mother yet,’ and ‘I cannot have these babies’ […] I sat with those thoughts longer than I would like to admit,” she said.

But then there was another voice – the voice that reminded her of what matters most. The voice that asked her, “What if that was me and my brother? or What if our birth mother’s did not give us a chance?” It turns out she and her brother are adopted. Their mothers, by choosing life for them, chose life for these precious babies as well.

“God had started to soften my heart and I was letting Him back into my life at this point, so His voice was the clearest of all,” Paige said. “He assured me it would all be okay and for me to have faith. I, then, knew what I had to do.”

She met her twins’ adoptive parents through an adoption agency called Children at Heart. She calls them “a sign from God” who had been waiting to adopt for a long time. The set up an open adoption and she gets to see the twins and stays updated on how they are doing.

“God knew what He was doing the whole time, I just had to believe and trust in Him,” Paige explained. “Even though my plans didn’t go accordingly, God had other plans that were bigger and better than I could have ever imagined.”