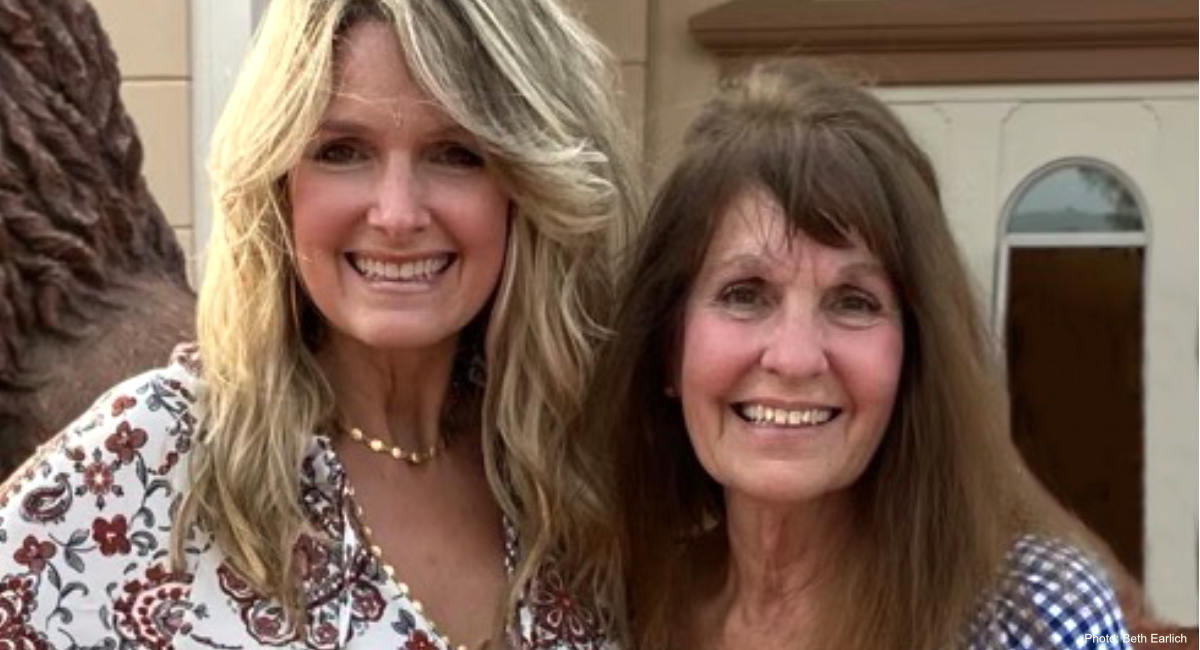 It was January 1973 before Roe v. Wade had been passed into law when a teenaged Beth Earich discovered she was pregnant.

With her boyfriend still in high school, she wondered how they’d support a baby. Beth didn’t know where to turn – abandoned by her mother when she was a child, her father traveled often, never allowing her to establish a strong bond with him. So, she and her boyfriend turned to his grandmother for help. She suggested Beth have an abortion.

“I didn’t know much about babies or about abortion because I never had healthy a relationship with my dad or a mother figure with whom I could discuss these things,” Beth told Live Action News. “I was very shy and introverted. Throughout my life, I often had trouble speaking up, like my voice was caught in my throat and because of that, it was very difficult to advocate for myself.”

Because abortion was still illegal, Beth traveled from Ohio to a secret place in New York to undergo the abortion. She remembers the room as being cold and sterile with a couple of plastic chairs and a single hospital bed. She learned that the abortionist and his nurse traveled throughout the state to commit abortions. After turning over her cash payment, the nurse offered pain medication, but Beth refused to take it. [Correction/Clarification, 2/14/22: A previous version of this article stated that Beth’s abortion was “illegal.” However, abortion was illegal in Beth’s home state of Ohio in 1973 but legal in New York. Upon further discussion, Beth stated that the lack of furniture and equipment at the abortion facility led her to believe the traveling abortionists were operating illegally.]

“I remembered being very tense and the nurse yelling at me to relax. I couldn’t block out the loud noise of the machine or the unnerving feeling of a pulling sensation in my womb,” Beth said. “It was a very painful experience, both physically and mentally.”

Afterward, Beth was shown a bloody basket filled with aborted baby body parts as evidence that her procedure had been successful. Realizing her baby was among the other murdered children callously discarded like trash, she struggled with guilt and shame.

Beth said, “I felt like I was marked. How could God ever love or forgive me when I committed such a heinous act?” Beth didn’t yet know a loving and forgiving God who offered her a way to salvation.

It was three months later that Beth noticed a growing stomach “bump” and started to feel movement inside her. When a doctor confirmed her pregnancy, her surprise quickly turned to joy. While she realized she’d been deceived by the abortion facility, she was deeply grateful her baby survived.

With her advancing pregnancy, Beth made plans to live at a home for unwed mothers where they would help her find a job. But a day before she was to move into the home, her boyfriend offered her another option: to get married and raise the baby together. Their daughter, whom they named Christy, was born just two months later.

READ: Abortion survivor and adoptee Claire Culwell: ‘There is a reason that I survived’

“We were very young, and it was tough in the beginning with us living in government housing,” Beth said. “But I was so happy to be a mother and wouldn’t let anyone else take care of Christy.”

While Beth was raised without a religious upbringing, she had a hunger to know God. One day she started reading the stories of courageous religious figures depicted in the 16th century book, “Foxe’s Book of Martyrs.”

Beth said, “It was through those stories that I was led to a relationship with Christ and learned of a merciful God.”

Beth and her husband lovingly raised two daughters but never spoke about the abortion attempt on a cold winter’s morning in 1973. It wasn’t until January 1992, when Christy was 18 years old, that she learned about the miracle surrounding her birth.

Christy told Live Action News, “I was watching the Phil Donahue Show with my dad and the guest was a woman whose baby survived a late-term abortion. My dad turned to me and revealed that I, too, survived an abortion. I was surprised and bewildered but I grew up in a loving home, so the revelation didn’t have a negative impact on me except to make me staunchly pro-life at a young age.”

Now the mother of three daughters, Christy has passed her pro-life values to them. She encourages them to use social media as a platform to the pro-life message. As a family, they often participate in pro-life events — most recently, the March for Life. Christy’s oldest daughter started a pro-life club at her public high school and was a Thaddeus Stevens fellow with Students for Life.

“My daughters know that true empowerment is being courageous enough to embrace the amazing God-given ability to carry and nourish another human being, regardless of the circumstances one might be in,” Christy said. “Women are much stronger than the abortion industry would lead them to believe.”

Today, Beth relishes in being a grandmother but doesn’t let grass grow under her feet. Fueled by her love for children, she founded the House of Hope in 2006, an orphanage in Ghana, Africa, and travels frequently there. In 2016, she established a school to offer children in the villages a Christian education. Today, about 270 children attend the school and Beth offers scholarships to single mothers to offset the tuition.

“Many girls in the remote villages are pregnant by the age of 15. Our school is instrumental in helping them to attain an education,” Beth said. “We know that a solid education gives them the tools to lead a successful life and provides an alternative to the teen pregnancies we see so frequently.”

Christy admires her mother’s strength and fortitude and has learned much from her.

“There is nothing a woman cannot overcome if she puts her mind to it and aims for a goal,” she said. “My mom taught me that a child is never a hindrance, but a blessing. I am proud to call her my best friend and to share in her pro-life convictions.”