During a Subcommittee meeting of the House Energy and Commerce Committee on Wednesday, U.S. Department of Health and Human Services Secretary Xavier Becerra repeatedly denied the existence of a 2003 law banning “partial birth” abortion.

The Partial-Birth Abortion Ban Act of 2003 defines the D&X (Dilation and Extraction) procedure as “an abortion in which a physician deliberately and intentionally vaginally delivers a living, unborn child’s body until either the entire baby’s head is outside the body of the mother, or any part of the baby’s trunk past the navel is outside the body of the mother and only the head remains inside the womb, for the purpose of performing an overt act (usually the puncturing of the back of the child’s skull and removing the baby’s brains) that the person knows will kill the partially delivered infant.”

Below is an artist’s rendition of the procedure:

The law banning the procedure was upheld by the Supreme Court in the 2007 Gonzales v. Carhart ruling. 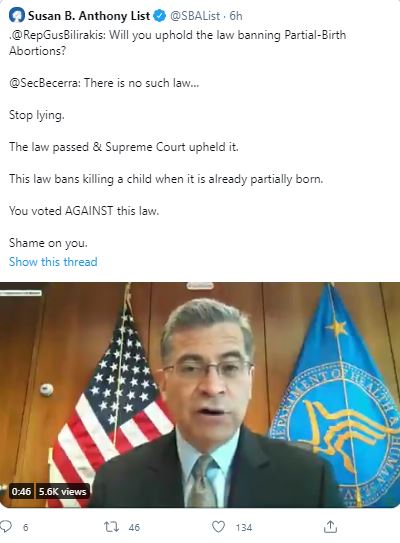 During the hearing on May 12, Rep. Gus Bilirakis asked Becerra if he would “uphold the law banning partial-birth abortions.” Rather than answering directly, Becerra claimed such a law did not exist. But Becerra’s remarks indicated that his answer was based on the fact that “partial-birth abortion” is not a medical term, though his later comments made clear that he knew precisely which abortion procedure the Subcommittee members were referring to:

There is no medical term like ‘partial-birth abortion’ and so I would probably have to ask you what you mean by that to describe what is allowed by the law, but Roe v. Wade is very clear, settled precedent that a woman has a right to make decisions about her reproductive health and we will make sure that we enforce the law and protect those rights.

… There is no law that deals specifically with the term ‘partial-birth abortion’. We have clear precedent in the law on the rights that women have to reproductive health care…

What Becerra failed to note about “reproductive health care” is that both Roe v. Wade and the subsequent case Planned Parenthood v. Casey reinforced the government’s ability to restrict abortion after viability.

[…] [T]he term ‘partial-birth abortion’ may be recognized in politics and by politicians but it is not a medically recognized term. Perhaps if you were to talk about what you probably know as Dilation and Extraction, which is a procedure used by OB/Gyns like my wife to care for a woman who is having a difficult pregnancy where there’s a chance that the fetus will not survive, then we can talk about that, but what I’m saying to you is that under the law, a physician or any provider of health care must make sure that he or she abides by the law and right now what our law says, and it’s pretty settled, is that a woman is entitled to reproductive rights […]

As my wife would tell you as an OB/Gyn is that the Dilation and Extraction procedure that is often used in late stage abortions for women is to protect the health and life of that woman.

At first, Becerra claimed partial-birth (D&X) abortions would be used when the baby has no chance of survival, but later states that his wife, an OB/Gyn, “would tell” the Subcommittee that it is a late-term procedure “often used” to protect a woman’s health. The term “health” is defined very broadly in abortion law (Doe v. Bolton) and may include mental health and even familial health.

In his remarks, Becerra implies that the procedure is still being used — “often” — despite a federal law explicitly describing and banning the procedure. The law does not utilize the actual term “dilation and extraction.”

There is no medical or logical reason for a D&X, which would be used only in later abortions, in the second and third trimesters, typically at a gestational age when a preborn child is capable of surviving outside the womb.

READ: Romney to Becerra: We won’t find ‘common ground’ on your support for gruesome partial-birth abortions

If a woman’s health or life is indeed at risk in the second or third trimester of her pregnancy, her child would need to be delivered quickly, but not deliberately killed. Babies are capable of surviving outside the womb as early as 21 weeks; typically, D&X abortions would occur beyond this point. There is no reason to turn the baby to breech presentation, deliver his body feet first up to the skull, insert scissors into the base of his skull, and then use powerful suction to remove the baby’s brain.

If a child is old enough to survive outside the womb, why would a doctor deliberately (and inhumanely, based on the description) kill him or her? Why not attempt to save the child and his or her mother? If a child is unlikely to survive, it still makes no sense to commit such a brutal procedure on a child who, like all human beings, deserves to be treated with dignity and respect. 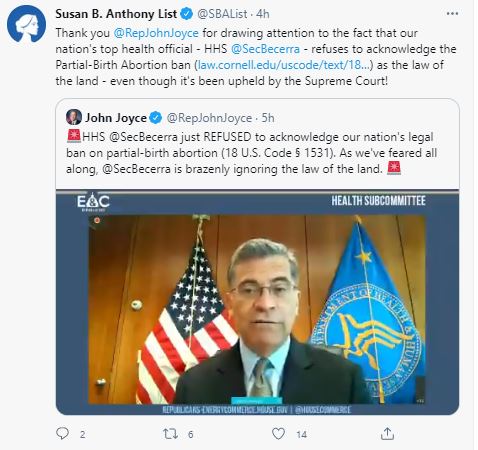 A nurse who once assisted with abortions described two partial-birth (D&X) abortions she witnessed, explaining that they were both carried out at full-term on healthy babies and healthy mothers. “One of the mothers,” she said, “already had three or four [children] and she didn’t want any more. The other girl was single. She didn’t have a husband and had no means of support. I asked, ‘Why don’t you put the baby up for adoption?’ She said, ‘I don’t know how it would be treated.'”

The abortion industry has long claimed that late-term abortions only occur for health reasons, as Becerra is claiming regarding partial-birth abortion, and the media repeats this claim without proof. But in 1997, Ron Fitzsimmons, executive director of the National Coalition of Abortion Providers, admitted that abortion advocates and the industry had been lying about partial-birth abortion. He told NBC’s Ted Koppel and other reporters that there were about 5,000 partial-birth abortions each year in the United States, at least 10 times more than the abortion industry publicly admitted. He also said most were carried out on healthy mothers and healthy babies who were capable of surviving outside the womb.

Despite Becerra’s attempts to skirt the truth based on terminology alone, federal law does ban partial-birth abortions, and this law should be enforced. Becerra, with zero health care experience, appears more concerned about the use of proper medical terminology to describe the killing of preborn children than he is with those children’s actual lives.