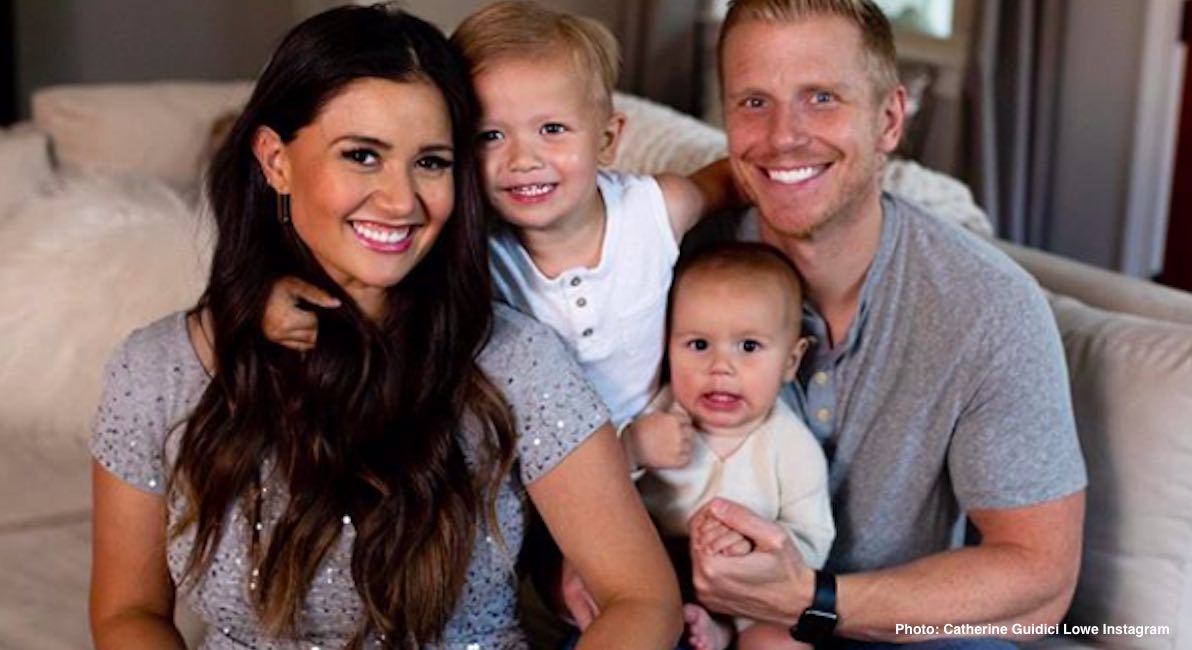 UPDATE, 12/23/19: Sean Lowe and Catherine Giudici Lowe announced the birth of their third child. On Instagram, Giudici Lowe shared a picture of her holding her new baby, beaming widely, with the caption, “Mama, Mia.” In her last post before going into labor, she talked about the couple’s excitement for their upcoming birth. “When Sean and I first talked about having a family, we constantly talked about a house full of love and laughter,” she wrote. “I don’t think the baby knows how much love is really in store for him/her.”

While Giudici Lowe didn’t explicitly announce the name or gender of the baby, Lowe did. In his own Instagram post, he wrote, “I’ve always wanted a daddy’s girl and now I’ve got her. Mia is healthy, Mama is doing great, and God is so good!”

6/29/2019Sean Lowe and Catherine Giudici Lowe, stars of the “Bachelor” franchise, have announced that they are expecting their third baby. The couple, who met when Lowe was the lead on season 17 of the “Bachelor,” and Giudici was a contestant. They married, and have since had two children, Samuel and Isaiah. And now, in a surprise for the family, they will be having a third.

In an interview with People, Giudici Lowe shared the news. “It was a complete surprise and I stared at the wall for a good 24 hours,” she said, explaining that she was “so emotional” upon realizing she was pregnant. “I was like, ‘I just had one of these!’”

Their younger son, Isaiah, just turned one in May, adding to the shock. “It was a little overwhelming to think about but we wanted a big family,” she said. “This is just the way it was supposed to happen. So we’re excited.”

Giudici Lowe explained that she hadn’t been feeling well, and Lowe guessed that she might be pregnant. And they’ve come up with a way to include him in the process. “Every time we get pregnant, [Sean] tells me,” Giudici Lowe said. “I leave the stick in the bathroom and he comes out with the stick. So every time that we’ve found out, he’s the one who is telling me. He had Isaiah in his arms and I was like, ‘Surely this is not going to happen.’ I did not think it was going to be true.”

While adding to their family so quickly after a new baby was not part of the plan, leaving them “stunned,” Giudici Lowe said they are nevertheless excited to add more memories. “Obviously, it’s going to be overwhelming and exhausting but they get to be best friends forever,” she said. “We get to have these children who are going to be so close in age and get to grow up and have all these memories. Yeah, it’ll be hard for us but it’s just a chapter. It’s so fleeting.” And older brother Samuel is excited about having a new brother or sister.

“Guess what, Mommy’s having a baby.” ⁣ ⁣ This was a contender for our baby announcement but ultimately we didn’t feel like Samuel delivered the line with enough conviction.

“He’s very excited and kissing the baby good night and praying for the baby,” she shared. “He knows what’s happening. He wants to see the baby — he’s trying to look down my shirt to see the baby!”

The “Bachelor” couple has always been open about their desire to have a big family, and Giudici Lowe previously spoke about her experience using the Ava bracelet to track her cycles, conceive Isaiah, and better understand her body. Fellow “Bachelor” alums Desiree Siegfried, Carly Waddell, and Jade Tolbert have also shared their testimonies about using Ava to conceive children.

While the Lowe family may not have been expecting to have a third baby quite yet, they’ve still enthusiastically embraced their preborn child. Congratulations to the growing family!