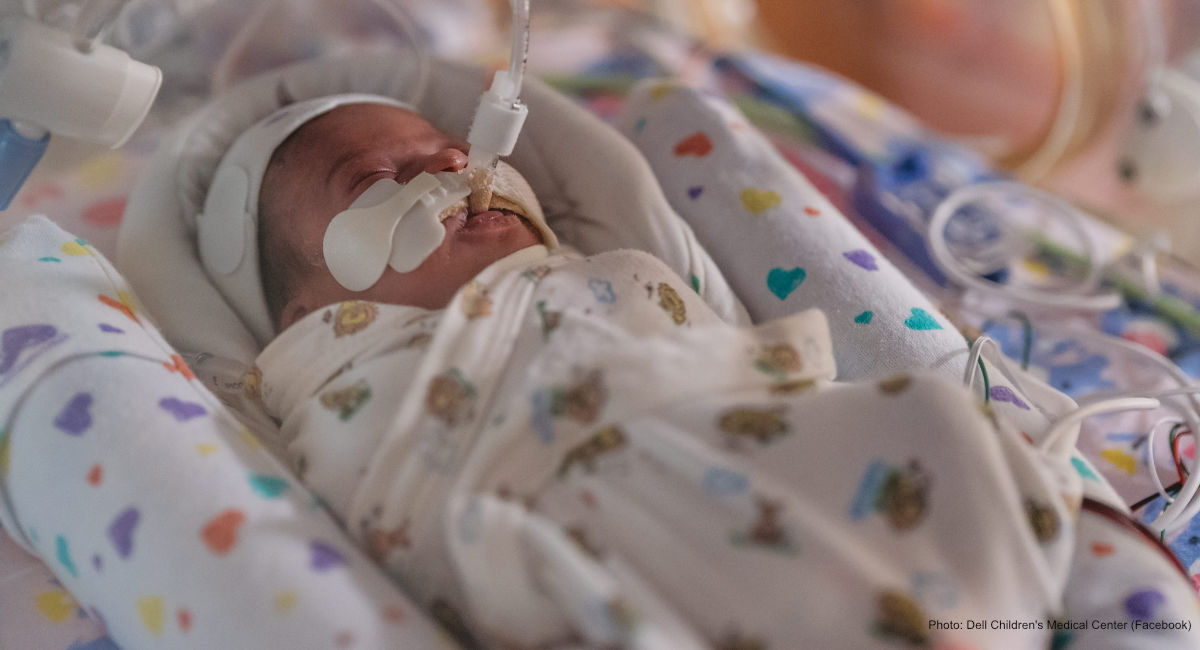 During an ultrasound when she was four months pregnant, Jasmine Matthews learned that her preborn baby had a heart condition that was later diagnosed as being fatal without surgery. But thanks to a team of doctors at Dell Children’s Medical Center who were willing to perform the surgery on the baby girl just eight days after her birth, little Le’Lani Bryant is doing well.

Le’Lani was diagnosed with transposition of the great arteries — in other words, her arteries were reversed and pumped blood backward, causing her to not get enough oxygenated blood. Dr. Charles Fraser Jr., head of the Texas Center for Pediatric and Congenital Heart Disease, a joint program of Austin’s Dell Children’s Medical Center and UT Health Austin, said that without surgery the condition is “almost uniformly fatal.” Thankfully, prenatal testing helped to diagnose her and get her the help she needed at birth.

But then, Matthews developed preeclampsia, a condition that causes dangerously high blood pressure and can lead to death in both mother and child. She had the condition with her first three pregnancies and her first baby did not survive. “I couldn’t breathe; I couldn’t sleep; I was having a hard time walking,” she told Austin American-Standard.

Mathews was taken to the hospital and Le’Lani was delivered at 27 weeks weighing just one pound and three ounces.

“She looked like a tiny little me,” said Le’Lani’s father Tometheus Bryant. “She looked just like the sonogram pictures.”

Le’Lani was given medications to help her heart, but they weren’t meant to work long-term. Her blood flow was still restricted and once she was beyond the one-week mark, which meant she was at a lower risk of bleeding in the brain, doctors decided to perform the surgery.

“This baby could not progress at all,” Fraser said. “In fact, she was digressing.”

Fraser had performed the surgery hundreds of times, but only once on a baby that small, and that had been ten years prior. But he had the same team members there to help him as he did the first time. That team had moved to Dell Children’s from Texas Children’s to open a new heart center and they don’t know of any baby smaller than Le’Lani to have the surgery. Her wrist “was way smaller than my pinkie,” explained Fraser. Her arteries were measured in “submillimeters.”

The surgery took place on what would have been Le’Lani’s big sister’s fifth birthday and she was given a 50/50 chance of surviving. Her arteries proved to be more “challenging” said Fraser than a “garden variety” case of the condition. He explained that just “one misadventure can be the end of the story” when performing the surgery on such a small heart.

Le’Lani pulled through the surgery, and doctors aren’t currently worried about her heart, but her lungs instead — like those of any premature baby. “Her prematurity issues are going to keep her in the hospital for a while, but it won’t be her heart,” said Dr. John Loyd, a neonatologist at Dell Children’s.

Though she may need a second heart surgery at some point, doctors think Le’Lani will be able to go home in January.

“One of the most gratifying things about this is the program we built,” said Fraser. “We’ve built a cadre of people that know what to do in this very difficult circumstance.”

Next semester, Fraser plans to teach a course on the very heart surgery he performed on Le’Lani, saving her life.