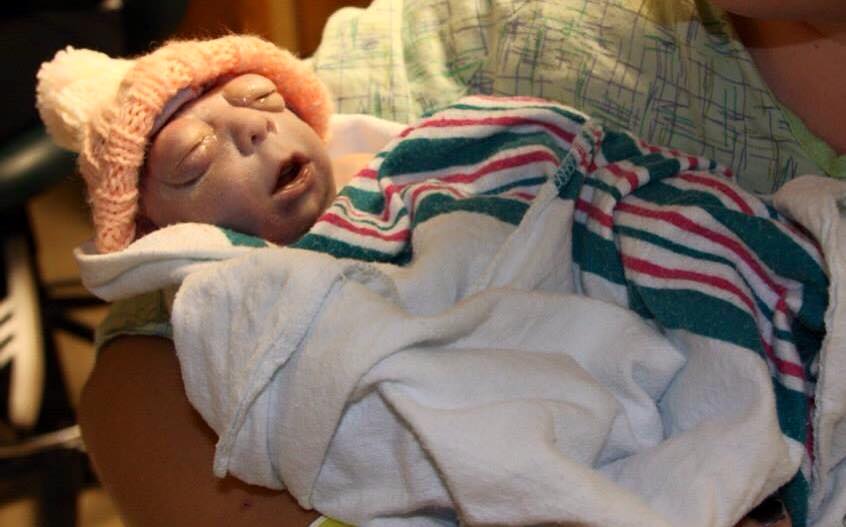 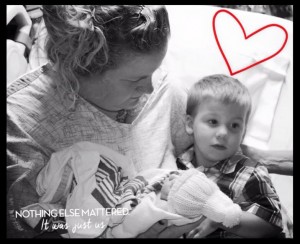 When Kari Williams and her family went in for Kari’s 20-week ultrasound on June 13, 2014, they were anxious to find out if the baby was a little girl like they had been hoping. They were elated at news that the child indeed was a baby girl. However, when the technician switched to the 3D ultrasound to get a closer look at the baby’s face, she quickly switched back, and Kari sensed that something was wrong.

“She said, ‘There’s something I have to tell you. There’s something wrong with your baby,’” explains Kari. “She ended up saying that she couldn’t see all of the baby’s brain and there was no skull. And I was thinking, What does this mean? If she was going to be born handicapped, I will take care of her. She’s my child.”

After what seemed like an eternity, the doctor came into the room and informed Kari that the baby had anencephaly, a birth defect in which a baby is born without parts of the brain and skull. She told the family that this meant the baby would not be able to live outside the womb.

“And that’s when I lost it,” says Kari. “To be told that her life was not compatible, I was devastated. Then [the doctor] suggested I induce the next day. And I looked at her. I gave her a funny look, and I said, ‘Do I have to?’ and she said no, but she thought it would be best since the baby wouldn’t survive and I had high blood pressure.”

Kari told the doctor that there was no way she would induce her pregnancy. She said she would to carry her baby to term, because inducing or aborting the child just was not a choice for her. The doctor set Kari up with a specialist, and she made an appointment with EVMS Health Services four days later. Kari said this medical team was incredible, and never suggested that she abort or induce. The specialist even told her that the baby girl, whom Kari named Marley, had all of her brain, but no skull. She asked if she could continue to see this specialist throughout her pregnancy, and was able to have all of her prenatal care at EVMS. Kari never returned to her former doctor.

As Kari struggled to find hope and meaning for her daughter’s short life, she began to inquire about donating baby Marley’s organs. She was told that if Marley was born weighing 8 pounds, her heart or heart valves could be used to save the lives of two babies. In order to donate her entire heart, Kari would have to give Marley to them right after she was born, but if she donated her heart valves, Kari would be able to keep Marley with her for up to 24 hours after Marley had died. Either way, Kari was determined to carry Marley to term so that other babies could be saved.

Kari continued to see the specialist every four weeks. In mid-summer, an ultrasound showed that there was an excess of amniotic fluid, causing Kari to look twice the size she should have at that stage in the pregnancy. Fluid at that level could cause premature labor, so when Kari was informed in September that the condition had worsened, she was forced to stop working.

Later that month, Kari’s water broke, and on September 23, 2014, she gave birth to Marley Jane, who weighed just 3 pounds, 10 ounces. She was a little over 15 inches long and had a lot of blonde hair.  A midwife, whom Kari had met before, was so touched by her story that she asked if she could be by Kari’s side and deliver Marley. 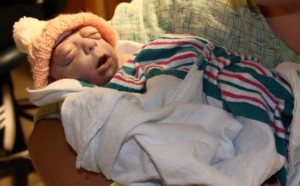 “I thought she was stillborn,” Kari says of Marley. “What breaks my heart is, she never cried once. As a mother, having a child already, she just wasn’t alert like he [her three-year-old son Weston] was. I was 34 weeks, and she was just very still and just staring. When they told me she was breathing, I was so relieved. They told me she wouldn’t be born alive. So for her to be alive and breathing was amazing to me. I felt like I proved the doctors from that first office wrong.”

Kari and Marley had quite a few visitors that day. Kari’s brothers, mother, sister, and son, and Marley’s father, were there to meet Marley. Everyone was able to hold her and say hello. When Marley passed away just over five hours after her birth, Kari, her mom and Marley’s father were all in the room.

“It was right after everyone had left,” says Kari. “I feel like she held on until everybody got to meet her that was coming to the hospital. I was holding her, and I handed her to my mom when the nurse came over and checked on Marley and couldn’t find a heartbeat. A doctor came in and was listening to her chest and she looked over at us and said, ‘I’m sorry. She’s gone.’ It was the worst feeling in the world. But she lived for five hours and a few minutes [outside of the womb]. That was amazing.”

Kari was devastated that Marley wasn’t able to save two other babies through organ donation, and she begin to feel as though Marley’s life had no meaning. But then she found a way to give Marley’s short life purpose.

When Marley was first diagnosed, Kari scoured Facebook for the term anencephaly and found numerous groups of moms who had babies with the condition. The moms in the Facebook groups had given Kari a great deal of support, but a lot of the moms had been pressured to end the life of their child. Doctors told them that abortion or induced labor was the best choice because their babies weren’t going to survive outside of the womb. This was heartbreaking for Kari, so she created a Facebook page for Marley to give hope to other parents struggling with the same issue, and to bring meaning to Marley’s life.

“I tell moms that [doctors] can’t force you,” says Kari, “I have never seen a mother on this page who carried her baby and had regret. The only ones with regret are the ones who terminated or induced. And it’s sad. I don’t have a single regret. I don’t for a single second regret carrying her. I knew she was my baby. I’m not going to end her life. That’s in God’s hands, how long she lives for. If she could have lived forever, I would have loved that.”