Eighteen-month-old Maison McMillan was born four months prematurely last year in Richmond, Virginia, weighing just a pound. According to ABC11.com, he recently heard his mother’s voice for the first time after being fitted for hearing aids. The video of his reaction has been viewed about five million times.

Maison was born prematurely after three people broke into his mother Lauryn Webb’s home in a random home invasion. She was shot three times during the attack and was rushed to the emergency room where Maison was delivered at about 24 weeks gestation. Doctors thought he might not survive, but he overcame all of the obstacles he faced.

READ: Micro-preemie triplets born at 22 and 23 weeks survive after doctors did everything possible to save them

After spending 158 days in the neonatal intensive care unit, Maison was able to go home with his parents. It was soon after that they realized he was unable to hear them. The risk of impaired hearing is greater for babies who are born prematurely. 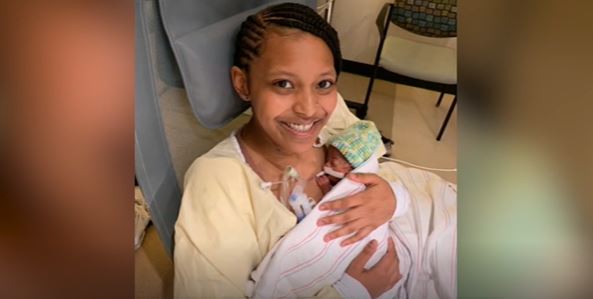 Doctors at Virginia Commonwealth University Children’s Hospital helped Maison and his parents fit his first hearing aids. In the viral video, his mother says, “Hi! Can you hear me? Hi baby.” And the smile on his face when he hears his mother’s voice for the first time is precious.

Webb told ABC11 that when Maison responded to her voice she started “bawling her eyes out.” Maison is said to now be thriving, with Webb telling “World News Tonight” that “Maison is so thrilled to be able to hear everything now. He just can’t take his eyes off of whoever is speaking. We’re just so glad that everybody else can gain some happiness from the video just like we did, and brighten up some people’s days during quarantine.”

Maison you are nothing short of a miracle. A year ago when i had you i was scared you came out so small not even two pounds. Maison Martin you are the strongest bravest person i know and i thank god everyday for choosing me to be your mommy. I’m so blessed to have you in my life and to get to say for the rest of my life i’m your mom. I love you beyond words Maison. Here’s to the first year of our journey being complete but the first day of our next journey. Happy First Birthday Maison Martin 💙

“Maison Martin, you are the strongest, bravest person I know,” Webb wrote on Instagram, “and I thank God every day for choosing me to be your mommy.”