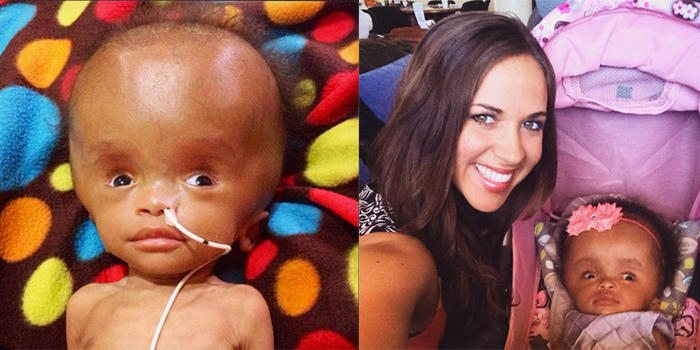 Sarah Conque was on a two-year missionary trip to Haiti in 2014 and was volunteering at Danita’s Children Medical Center when a young mother came in carrying a three-month-old baby girl with hydrocephalus. Conque could see that the baby girl, Nika, was in dire need of medical assistance and asked the mother to begin recreation therapy twice weekly with her. She assured the mother that she would help her find and access all the resources possible to help the baby.

I met this gorgeous baby girl today. Nika is 3mths old and is being raised by her 18yr old aunt, Sofie, because her mom died 2mths ago. Sofie said she stopped going to school (rare privilege in Haiti) so that she could take care of her niece. That’s such bravery and sacrifice, at a high cost. We are working now to arrange for medical attention for Nika’s hydrocephalus #bravery #sacrifice #love #hydrocephalus #hydrobaby #haiti #myhero #hope #orphans #littlewarriornika #hydranencephaly

Have you ever seen a more PERFECT little face?! Hint…. I think you know there’s only one right answer to this question! ?Praise God in advance for the incredible future ahead for this precious treasure living at @danitaschildren #orphancare #ayiticheri #greatdestiny #missionarylife #perfection #treasure #shesvalued #BabyNika #hydranencephaly #littlewarriornika

Conque was able to get Nika access to a Haitian hospital in the capital of Port Au Prince with a program for children with hydrocephalus. The trip took ten hours by bus, but it was worth it. Nika was selected to be one of the children who would receive life-saving surgery to place a shunt in her brain to drain the fluid. At five months old, she had her first neurosurgery.

Right now…. Nika and my Mom are in the same room… My heart is overflowing for so many reasons! Praise God for this moment and the many like it to come this week! #ArleneInAyiti #missionarymom #love #haiti #mommalove #littlewarriornika #hydranencephaly

Unfortunately, Nika’s mother abandoned her at the hospital. Eventually, she returned for her baby, but over the next few months, Conque would spend endless hours pleading with Nika’s mother to help her daughter, to bring her daughter to appointments, and to take part in programs to help her daughter’s health improve. However, her mother continued to neglect Nika’s care. Conque wrote about this struggle on her blog:

I was becoming increasingly concerned for Nika’s recovery, seeing as almost two months later, her mother had failed to bring her in to see the doctor. I was also very interested to see if the surgery we had worked so hard to get was even successful. I was worried for Nika, but all I could do was pray that God would protect her and bring her comfort right where she was. It wouldn’t be until June 2014, four months later, (Nika was nine months old) that she was finally brought back into the medical center. I was relieved to see Nika alive. I was then saddened to discover that the surgery had not worked for her, the fluid was quickly coming back, and she was having reoccurring seizures. Because of the lack of care, and her declining health, Nika was rapidly developing malnutrition.

Nika was enrolled in a free program for malnourished children, but her mother did not consistently bring Nika in each week. Conque realized that Nika was malnourished not because of her diagnosed health condition, but because her mother was neglecting her. During the process, Conque discovered that Nika’s mother had been a prostitute and had possibly ingested poisons in an attempt to self-abort, leaving little Nika with her condition.

Finally, in August of 2014, Conque was able to make her way to Nika’s home, where she found the baby girl alone on a sack of rice, surrounded by garbage and dogs. She was eleven months old, but she weighed only six pounds, much of which was from the amount of fluid building up in her brain. It was a miracle she was alive.

I hope y’all haven’t forgotten about this babe that went to Port Au Prince in March for neurosurgery. The operation went wonderfully! Surprisingly, the biggest difficulty has been encouraging her “aunt” to love and take care of her. It’s moments like these that my heart breaks in a million pieces, but it’s also when there is so much room for The Lord to work. It’s been a process, but her “aunt” has been coming to therapy and Baby Rescue Program for the past 3wks consistently! This is HUGE! Little victories, step by step, will eventually make the bigger difference! All the glory to the one that made this princess! #hydrocephalus #haiti #recreationtherapy #danitaschildren #babyrescue #love #littlewarriornika #hydranencephaly

The next day Conque asked the president and CEO of Danita’s Children if they could take Nika into their orphanage. They agreed and so did Nika’s mother.

Nika had a long road ahead of her and the odds were not in her favor. Conque learned that Nika’s true diagnosis was hydranencephaly, in which the brain’s cerebral hemispheres are missing. Ninety-nine percent of babies with hydranencephaly die before age one, according to Nika’s doctor. A lot of prayer, doctor visits, and a feeding tube helped Nika overcome those odds. With Conque as her guardian, Nika went from being close to death with her organs failing to getting a medical visa and flying to Florida to receive a new shunt.

After that shunt was placed in May, her head circumference decreased by nearly two inches and 5 pounds of fluid was drained.

“Nika is continually making progress and developing with every passing day,” writes Conque. “With every breath she takes, she defies the odds and proves the impossible is truly possible with God.”

In September 2014 (left), Nika was 12 mths old and weighed only 6lbs. Her little body was fighting, but her organs were failing. She couldn’t suck a bottle and could only tolerate a pinky sized amount of milk every 2hrs through a feeding tube. On top of the neglect she endured prior to living at @danitaschildren, she was given the diagnosis of hydranencephaly that medically gave her terrible odds of living past even 12mths. You see, she only has a brain stem and a little bit of her cerebellum. Her CT scan showed that she doesn’t have hardly any brain tissue! How does this all add up to equal the beautiful 16lb 16mth princess (right) that lights up our lives today?! The only explanation is that it is a COMPLETE miracle! The Giver of Life reversed the outcome that many thought was inevitable… He gave her body new strength and continues to do so everyday! I share this today not to tug on your heart strings, but to continually give God the glory and praise for His divine love in our lives! Praise God for Nika and her beautiful soul and thank you Jesus for the privilege of being in her life ❤️ ————————————————- “There are only two ways to live your life. One is as though nothing is a miracle. The other is as though everything is a miracle.” — Albert Einstein #hydranencephaly #miracles #gratitude #haiti #medicalmissions #orphancare #recreationtherapy #ayiticheri #littlewarriornika

Nika’s day started out a little rough with vomiting, but has gotten better. Baby girl just took another 3 1/2 ozs of formula by mouth instead of through the feeding tube!!!! Go Nika go! You can do this… We all believe in you! #NikaInAmerica #hydrowarrior #hydranencephaly #hydrocephalus #littlewarriornika

On September 20, 2014, I wrote, “Nika, you were invisible to those around you for so long. You were mistreated, overlooked, and abandoned by your earthly family, but you were never alone. You have always been a daughter of The King. Guess what that makes you? A princess worthy of love and infinite value. Now, you are the center of my affection, heart, and prayers. Nika, my soul is tied to your soul forever and ever. You are safe here… You are loved… and that will NEVER change baby girl!” ….almost a year and a half later, that still hasn’t changed… However, almost everything else about Nika’s reality has changed…. {Click link in profile to read full post} #littlewarriornika #hydranencephaly #hydrocephalus #neuroninja #hydrowarrior #miracle #thankful #godisgood

Nika is now two years old and living in Louisiana with Conque who writes:

We know that Nika has a great destiny and purpose on this earth. We know that God makes each and every one of us according to His plan, and for this reason and more, we choose life, every time… no matter the prognosis. We know that the medical textbooks have a lot to say about our bodies, but we rejoice in the knowledge that we aren’t just bodies, we all have a spirit and a soul, too, that are more powerful than the statistics.