The latest undercover video from the Center for Medical Progress (CMP) shows a Planned Parenthood Medical Director describing how she would react to a baby who survived an abortion — and it rightly has the nation horrified and again wondering: Are babies left to die when they survive abortion?

In the video below, a CMP investigator is heard asking Dr. Taylor whether there is “any standard procedure for verifying signs of life.” Her reply is beyond unsettling: “Well, the thing is, I mean the key is, you need to pay attention to who’s in the room, right?”

One past case in Florida illustrates perfectly how “who’s in the room” can make the difference between life and death for a child who survives an abortion.

In 2006, the A Gyn Diagnostic Center in Hialeah, owned by a woman named Belkis Gonzalez, came under investigation after an anonymous caller told police that staffers threw a baby on the roof of the building after being born alive in the facility’s waiting room. The baby’s 18-year-old mother went to the facility believing she was 23 weeks pregnant, and while waiting for abortionist Pierre Jean-Jacques Renelique to arrive, delivered her baby girl, who eventually died an excruciating death.

In an arrest affidavit, Gonzalez testified that she “observed the infant moving and making noises for approximately five minutes.”

According to a CNN report of the incident, the baby girl’s mother said Gonzalez entered the room, used a pair of shears to cut the baby’s umbilical cord, then “scooped up the baby and placed the live baby, placenta, and afterbirth in a red plastic biohazard bag, which she sealed, and then threw the bag and the baby in a trash can.”

On July 28, 2006, an informant told police that the baby’s body was placed on the roof of the building, but was later retrieved and placed back inside the business. Police did not locate the baby’s remains until they had visited the abortion facility a second time, six days after the mother said her daughter was born alive.

Abortion clinic owner Belkis Gonzalez pled guilty on December 20, 2007, to practicing medicine without a license at a Miramar, Florida, abortion clinic…. Gonzalez and her associate, Siomara Senises, were involved in the death of a baby born alive.… That death was discovered when an anonymous call was made to the police, who discovered that an infant was born alive during a late-term abortion, placed in a biohazard bag, and tossed onto the roof of the abortion clinic by Gonzalez in order to avoid detection. The mother of the dead baby girl, who was named Shanice Denise Osborne, has since come forward and corroborated the story.

The abortionist, who claimed he was not in the building when the baby was born, never faced murder charges, but according to CNN, Renelique’s license to practice medicine was revoked. The medical board upheld Department of Health allegations that he falsified medical records, inappropriately delegated tasks to unlicensed personnel, and committed malpractice.

When it comes to abortion, Dr. Taylor’s words appears to be standard operating procedure, despite several state and federal laws that compel medical personnel to make every attempt to save a baby that survives an abortion attempt.

Under the Born Alive Infants Protection Act, a child who survives an abortion is guaranteed protection and the full rights of citizenship. However, these infants are often left alone to die, struggling for life, or are killed by abortionists. In Live Action’s Inhuman investigation, abortionists were exposed admitting they would refuse life-saving medical care to infants who survive abortions in their facilities:

Live Action News readers should recall the case of Pennsylvania abortionist Kermit Gosnell, who was convicted of three counts of first-degree murder after snipping the spinal cords of babies born alive during late-term abortions.

The horrors of Gosnell’s crimes were recounted in the Grand Jury Report, which read in part:

He [Gosnell] also killed live, viable, moving, breathing, crying babies. He killed them by cutting their spinal cords after their mothers had delivered them after receiving excessive amounts of medication designed to induce active labor. This report documents multiple murders of viable babies. The evidence makes a compelling case that many others were also murdered.

It was Gosnell’s standard business practice, to slay viable babies. 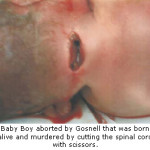 In addition to Gosnell, the state also arrested and convicted Gosnell’s wife, along with several of Gosnell’s employees, on various charges after documenting “seven specific incidents in which Gosnell or one of his employees severed the spine of a viable baby born alive.”

One former staffer stated (in an exchange with Mark Crutcher, president of Life Dynamics):

Most of the time we would see him where the fetus would come completely out and of course the fetus would still be alive because it was still moving, of course, you could see the stomach breathing and, um, that’s when he would do his, um, he would snip the spine, as they were saying this doctor did, and of course the soft spot was one of the spots that he, um, would take one of the forceps — or what is it called? — the dilators, and stick it down the soft spot of the fetus’s head.

When Crutcher asked Karpen’s former employees if they saw the abortionist “kill that baby outside the womb,” they replied, “Yes, sir.”

Crutcher then asked if he killed them “by jamming some kind of instrument into the soft spot.”

One of the women responded, “Either that or actually twisting the head off the neck, kind of with his own bare hands.”

In December 2016, Live Action News reported that the House Select Investigative Panel on Infant Lives, which investigated the illegal sale of aborted baby body parts, issued several referrals for criminal investigations to state attorney generals and the United States Department of Justice. Karpen was on that list.

The callous disregard for babies who survive abortion was also detailed in an exchange between a Planned Parenthood lobbyist and Florida lawmakers in 2013.

Alisa LaPolt Snow, a lobbyist for the Florida Alliance of Planned Parenthood Affiliates, stated that allowing babies to die on the table after being aborted was between the “doctor and their patient.”

This alarming claim was made while Snow was testifying on behalf of Planned Parenthood against a ‘Born Alive’ infant protection bill that would give human rights to babies born alive after botched abortions. Snow said doctors in abortion facilities should not be required to take surviving babies to a hospital, instead leaving the ‘choice’ of life or death up to the abortionist and the child’s mother:

So, um, it is just really hard for me to even ask you this question because I’m almost in disbelief. If a baby is born on a table as a result of a botched abortion, what would Planned Parenthood want to have happen to that child that is struggling for life?

Rather than assuring the lawmakers that her organization would comply with the Federal Born Alive Infants Protection Act, requiring physicians to attempt to save a baby who survives an abortion attempt, the Planned Parenthood lobbyist responded: “We believe that any decision that’s made should be left up to the woman, her family, and the physician.”

As Live Action reported during its Inhuman investigation, Planned Parenthood eventually released a statement, following after outrage over its lobbyists’ comments:

In the extremely unlikely event that the scenario presented by the panel of legislators should happen, of course Planned Parenthood would provide appropriate care to both the woman and the infant.